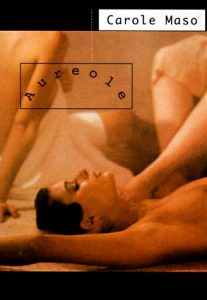 I started reading Aureole by Carole Maso because Goodreads told me that Gwendolyn Jerris wanted to read it and I needed the kind of book that Gwen loves—lyrical literature like Inner China that falls somewhere between poetry and prose. It’s a type of writing that echoes that of our shared advisor, Micheline Marcom, and one I think we both aspire to in our own way. I started reading this book because I needed to get lost in language—to see again what some of its outer limits are.

What I didn’t realize until I opened the book and started reading the introduction was how very perfect this book would be for stretching my language and my thinking. To start with, it turns out that Maso is, like I, a prose writer writing poetry. Longtime readers of this blog will have seen me fall in love with all kinds of writers who dance along that line (most notably Anne Michaels and Michael Ondaatje). But when Maso started describing her process for writing this book—for the way she was deliberately reinventing her language—I was hooked. She writes “If I felt I was doing something I already knew how to do well, the rule was to start again.”

Part of my struggle is that I’ve been doing a lot of blogging lately. And I don’t mean for this blog. At work, I’m writing about content marketing and other forms of digital marketing where the very best thing I can do for the audience is write simply and clearly as I try to demystify aspects of the topic. What that’s left for this writer, though, is a large hole in my creativity where I want to be mysterious. I want to be oblique. I want to stretch pull tease and twist language until it does my bidding and my readers can learn about how to reinvent their worlds along with their words rather than following expected paths to get measurable results.

Actually, the passage above is hardly nonsense, at least not in a Steinian sort of way (though I know Maso was reading Stein when she wrote this). But there is a certain amount of arbitrariness and randomness to the connection of the thoughts. When they are French? Usually Frenchness is more of a permanent state than that. This allowance that it’s an identity the two characters can put on or take off is playful and perhaps something they put on when they are in France. As this story evolves, “When they are French” also starts to mean when they are lovers or in bed. I absolutely adore the openness of this and the fact that some of the meaning I’ve just imparted comes from my head and that if you read this story, you might have an entirely different (and equally valid) meaning.

That openness of meaning is so much what I crave reading and also writing. A work that only achieves its full meaning through interaction with a reader just seems like magic to me. And although I bring my own feelings and experiences into a reading of Madame Bovary, you and I are much less likely to be able to build castles of our own interpretations of it because the narrative and language are much more conventional.

“And she opens her hand, her life to him: a blur of wings.

And desperately then.” – Maso

Another thing that really makes me want to read this book aloud is the way that Maso uses the rhythm of the words. Imagine after reading an entire chapter of foreplay and play and allusions to the act of sex, reaching this peak…

You Can’t Push All the Time

All of this fabulous word play and invention of syntax and crazy sensuous juxtaposition so pushed my thinking of what words can do that when I reached a line that read “threshold of all possibility,” the mundanity of those words only highlighted how wonderful the rest of the book is. What this means for me and my writing is that if I’m going to push the limits, I’m going to have to really go for it, because the moments that I flinch or get lazy will be obvious to the careful reader. And worse, they will disappoint me if I catch myself doing it.

A completely unexpected moment in this book is when Maso references India. I’m actually leaving for India in just over a week and suddenly it’s everywhere, including in A Mapmaker’s Dream, another book I read this weekend.

That sounds like a complete and total non sequitur, but I had to find some way to drop in the fact that my blogging might be a bit sporadic in October. I’ve bought all of these books:

(Two of which I’ve since read) and I plan to pack as many of them in my luggage as I can and to write when I can. Maso described a character’s “ink-stained hands (the measure of her day)” and I plan to get some of that in as well. Maybe I can find my own language in the interstices of poetry and prose. I’m sure as hell going to try.

If you want to open up the boundaries of the way you use language, pick up a copy of Aureole from Powell’s Books. Your purchase keeps indie booksellers in business and I receive a commission.

I’ve been thinking a lot about bravery this week and about commitment to one’s art. It all started at the book launch party for Sex and Death in the American Novel. The book’s author, Sarah Martinez, had invited Maureen O’Donnell to perform a belly dance to the music of Marilyn Manson that had inspired Martinez while writing her novel. I thought it was going to be ridiculous. But then I watched O’Donnell dance. By committing fully to the dance and her character, she transformed from a tiny Goth girl with plastic horns into an arachnoid creature who kept the audience rapt.

Sex and Death in the American Novel speaks to the myriad ways we come to and commit to our art and ultimately ourselves. Jasper is the wunderkind who was swept into the accepting arms of the writing world and never stopped for a moment to reflect. Tristan is the writer who could never get past his struggles. And Vivi did everything she could to avoid becoming a “Writer” only to find she had done just that. In Vivi’s case, all that she lacked was the acceptance of herself and of her gift.

Every artist I know is on a different path to the greatness within. None of them will achieve lasting fulfillment without that self-acceptance.

Martinez’s greatest success is disentangling the complex fabric of emotions each character is feeling. She understands the push-pull of shame and desire in art and love, and her characters strive to create the relationships that are right for them regardless of societal norms. And of course those norms are also what artists have to question and redefine on their way to personal greatness.

One of the things I admired about this book is how Martinez conveyed both the physical and emotional complexities of a ménage à trois. She enticingly wrote the encounters between her characters so that the reader is able to experience—in vivid detail—even the most unfamiliar acts right along with Vivi. The play-by-play narration which can be too much in scenes of daily life lends itself perfectly to introducing the reader to a new world of possibilities.

Anyone who reads Fifty Shades of Grey and finds it misogynistic might enjoy the sex positive attitude in Sex and Death in the American Novel instead.

On Writing About (and Becoming) a Fulfilled Woman

I’ve been reading a lot about women and sexuality as I work on my next novel. A.S. Byatt taught me to love my body. Dorothy Allison helped me question my relationship with Feminism. And Slavenka Drakulić revealed for me new depths in the relationship between mother and daughter. In Sex and Death in the American Novel, Sarah Martinez showed me how to write fearlessly about subjects that terrify me. Each of these authors is giving me strength as I commit to writing the next book as bravely as I can.

If this review made you want to read the book, pick up a copy of Sex and Death in the American Novel from Powell’s Books. Your purchase keeps indie booksellers in business and I receive a commission.