I picked up Shards by Ismet Prcic because we’re traveling to Croatia soon and I often like to explore the literature of a country before arriving—something about getting to know the soul of a place and a people through art. The book is a fantastically well-written story of a man who grew up during and escaped (kind of) the Bosnian War and I could say all kinds of complimentary things about its construction and the characters and language. But what I want to talk about today is how an outsider views a culture.
When making my reading list for this upcoming trip, I wanted to read contemporary works that were available in English. In listening to Benjamin Moser’s “That Other Word” interview, I realized how selective the process is that leads to works being translated into English. Prcic wrote Shards in English, but Saša Stanišić wrote How the Soldier Repairs the Gramophone in German and Dubravka Ugrešić wrote The Ministry of Pain in Croatian. I mention these three in particular, because these are the books that came to hand in my search (though I had already read The Ministry of Pain).

These books have in common that they all deal with the effects of the Balkan War on their characters, and I came to wonder, are there contemporary Balkan books that don’t? I am thinking about definition a lot lately and the roles we put on ourselves and the roles others put on us. I could understand if every contemporary writer in any way associated with the region only wrote about the war—war has a huge and lasting impact—but I suspect that there are writers who deal more peripherally with the war (if at all) and I am interested to know if their work is being translated. I am curious about the filters that are being applied by translators and agents and editors and publishing houses to the way I see the Balkans. How horrible it would be if writers from the former Yugoslavia were given the impression that the world is only interested in their work if it is about the Balkan War. How limiting for their potential audience.

Perhaps I’m wondering how much daily life in the tourist areas of Dubrovnik is affected by the war or I am curious about the lives of our soon-to-be landlords. Perhaps I feel a little guilty that I have gone from seeing Plitvice as the place my grandmother most loved to seeing it as the place where the first shot of the war was fired. Perhaps I am thinking about my own writing and the lack of control I feel in a world where the success of a writer is still determined by so many external actors (and I don’t mean readers). In learning more about Croatia and its neighbors, I have read some very good books, including Shards, but I keep feeling like I’m only able to experience through these books one aspect of a rich group of cultures. I guess that’s what the plane ticket is for…

If this review made you want to read the book, pick up a copy of Shards from Powell’s Books. Your purchase keeps indie booksellers in business and I receive a commission.

In Anton Chekhov’s “The Darling” from the collection Stories, Olenka is a caregiver to the point that she subsumes her identity to mimic that of the one she cares for. By approaching the topic through description and explanatory sentences, Chekhov fully immerses the reader in the story. 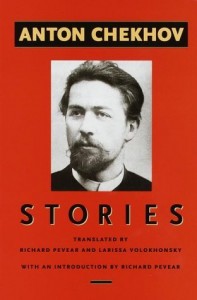 Chekhov names the nature of Olenka’s character early in the story in the following passage: “She was always fond of some one [sic], and could not exist without loving.” He then mentions some of the family members she has loved. But prior to this, her husband, Ivan Petrovitch Kukin, (aka Vanitchka) has had a large blowup about the vulgarity of the patrons of the story. I was drawn into the drama of Kukin and didn’t see this first clue, the subtle unfurling of Olenka’s personality. When she first parrots his opinion, “‘But do you suppose the public understands that?’” I thought we were seeing an action she would habitually take, but I didn’t yet realize this was the key to her nature. It isn’t until Chekhov revealed that the actors referred to her as “Vanitchka and I” that I got the point.

All of the details of the story point to the revelation about Olenka that she becomes a mirror of the one she loves; and Chekhov says it plainly several times. But because he says it plainly and also demonstrates through the action of the characters (I would argue that he never goes into full-blown scenes), the reader is enveloped by Olenka and her nature, rather than being assaulted from one direction. If, for example, Chekhov had simply told the reader over and over what Olenka was like, it would have felt hollow. If he had shown us her nature through action only, we might not have gotten the point. It is precisely this marriage of exposition and explanation that makes the story so rich. And because his explanatory sentences are so simple and direct, they don’t feel like an assault to the reader’s understanding of the story. They feel like an insight not a direction.

Regarding Olenka’s second husband, Chekhov shows her consumed by his lumber business as she “dreamed of perfect mountains of planks and boards, and long strings of wagons, carting timber far away.” He then goes on the say, “Her husband’s ideas were hers.” The entire story is woven with the warp of exposition and the weft of explanation. When Olenka is alone and she fails to muster opinions, Chekhov gives a beautiful description of her wasting away. He also tells us, “she had no opinions of any sort.”

When she begins caring for the veterinarian’s son, Chekhov writes, “Now she had opinions of her own.” What is interesting is the opinions are still not on matters that pertain to her daily life, but rather to the boy’s schooling. Her devotion continues, even when the object is less willing.

It is a short story, eleven pages in the collection I read, but it is a full story. Because Chekhov focuses on this one aspect of Olenka’s character and because he approaches it from more than one angle, the reader is enveloped in a world that is all about Olenka’s assumption of her loved ones’ worries and opinions.

I often worry that I am over-explaining things, but this story showed me that it is possible to go into minute detail about something as long as it is fully explored and done through more than one method. Olenka’s nature was evidently important to express, Chekhov based an entire story on it. It will be important for me to selective about the things I highlight in this way (although I can choose to highlight more because I am working on a novel and not a short story), but if I don’t explain them and expose them, they may not be in the story in the way I want them to. Storytelling is seduction.

A note on the [sic]: obviously I am reading a work in translation, but the use of “some one” versus “someone” more than once in the story made me want to know if this would be as peculiar in Russian or if the translation was somewhat outdated. I couldn’t help but think that the translator was trying to convey the nuance of Chekhov’s phraseology by stressing the individual “one.”  Of course, I have no evidence either direction, but it certainly enhanced my understanding of the story.

If this review made you want to read the book, pick up a copy of Chekhov’s Short Stories from Powell’s Books. Your purchase keeps indie booksellers in business and I receive a commission.