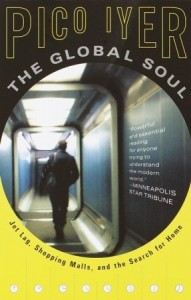 Readers of this blog will know that I almost never write about nonfiction, but in reading My Bookstore, I fell for the writing of Pico Iyer and I wanted to know more about his jet-setting lifestyle. The Global Soul: Jet Lag, Shopping Malls, and the Search for Home did not disappoint. In fact, the book, like the very best literature, helped me understand something fundamental about who I am. More on that later.

What is the Global Soul?

Iyer posits that globalization is turning us into transnational villagers. It’s certainly true of him, a man of Indian descent, born in England, raised in the US, and living in Japan. Plus he travels widely. What Iyer seems most interested in are these amazing confluences of culture like LAX where not only do peoples from all nations exist at one moment as they travel through, but it’s also a place where Ethiopians from opposite sides of a civil war can find themselves working together.

Iyer is also interested in how travel and motion are breaking down the traditional national barriers. He introduces us to his friend who rests in Hong Kong but seems to live in transit between European, American, and Asian offices.

All of these people are global souls, according to Iyer, but I wondered often what was the difference between them and my Ukrainian and Welsh great-grandparents who came to live in America. Certainly travel is faster now, but this mixing of cultures is not new. But either way, the sociologist in me enjoyed his stories of how cultures come together and how the way people look is no longer a good indicator of where they come from.

“I begin to feel increasingly at home in big cities… Perhaps because big cities have become the place where people of different backgrounds tend to congregate.” – Kazuo Ishiguro

Born in Idaho, I lived in Chile for all of second grade. I remember thinking before we traveled there that everything was going to be exactly the same as at home, except for upside down. I was neither wrong nor right about that. In Chile I met people who were like me but not and I learned another tongue. Because I was with my family, it all felt like home. I did feel somewhat different in that I was blonde and we were privileged under the dictatorship by our American nationality.

“Almost any immigrant who arrives today at the place he’s hoped for will find it’s become somewhere else.” – Pico Iyer

Later, when I lived in Poland on high school exchange, I also felt at home even though I was with a new group of people in a new country and speaking a new language. This opportunity to see people in their own cultures made me accept a wide variety of norms instead of looking at them as alien. I learned to observe and interpret instead of judge, something that I pride myself on now.

“A true cosmopolitan, after all, is not someone who’s traveled a lot so much as someone who can appreciate what it feels like to be Other.” – Pico Iyer.

I settled in Seattle and we’ve chosen for a lot of reasons to stay here for now. Sometimes the world calls to me and we travel, but I have this sense that home is inside of me. I was talking with my dad about it as he visits this weekend and about whether home really is where the heart is, but some of my closest friends live in Asia or Australia or Europe or the Middle East. The people I love live in Seattle. They also live in Moscow and Boise, Austin, DC, Denver, Rochester, Portland, and somewhere in Maine. You can even find one or two in LA, Boston, and Richmond. So I can’t say that having my people around me is what makes a home for me. That would make my home the Internet, but I don’t accept that. I really do think that home is a sense of self and that can be on any continent or even in transit.

“One curiosity of being a foreigner everywhere is that one finds oneself discerning Edens where the locals see only Purgatory.” – Pico Iyer

That said, we are in constant motion and I wonder whether that activity more than anything keeps us from feeling restful and settled. I read portions of this book in Cal Anderson Park and in the Frye Art Museum. I turned some of the 300 or so pages in various rooms in my house, on the bus, and in the car (nasty habit I should stop). Even as a fast reader, I couldn’t find a few hours of peace to just read this book in one place. I realized as I started counting the locations I read this book how important those solid blocks of time are for me, no matter what continent they are on. Some of the best moments of my life were walking through Rovinj, Croatia with my husband when we had nowhere to be.

“The unhappiest people I know these days are often the ones in motion, encouraged to search for a utopia outside themselves.” – Pico Iyer

I learned from this book about how much home is inside of me. I learned about other cultures that share values with me that don’t quite conform to American norms (particularly the Japanese sense of private passions and public face). And I learned that I like my life.

The book is a bit dated, it was written in 2000 and the Hong Kong he visited was British Hong Kong, although not a lot had changed when I visited eight years later. But a lot of the principles of the book hold true. We are still in motion. We are still converging, even if we always were. I am grateful that our lives converge, dear readers, in person and over the Internet. I’m glad that we can share our love of books.

I think you’ll enjoy reading about how Canada is striving for a mosaic rather than a melting pot. You’ll be intrigued by the parallels between refugees and businessmen and perhaps concerned by shopping malls that contain so many facets of daily life you never need to leave them. You might even find a mini essay on what makes Ondaatje so enjoyable.

If this review made you want to read the book, pick up a copy of The Global Soul from Powell’s Books. Your purchase keeps indie booksellers in business and I receive a commission.