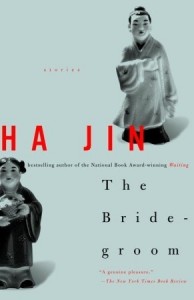 In Ha Jin’s collection of stories, The Bridegroom, the protagonists are powerless to effect any real change in their circumstance. At best they can hope for vengeance by spreading disease or peeing on purslanes. Ha creates this feeling of constraint and hopelessness in “Saboteur” by tightly controlling his delivery of words.

Through his use of short words within short sentences, Ha subjects the reader to a staccato feeling and gives the effect of tight control. “The rice and cucumber tasted good, and Mr. Chiu was eating unhurriedly.” His sentences rarely include more than two short clauses and he uses few words over three syllables. Even when sentences do run longer, the clauses are short as in the following: “During the two weeks’ vacation, he had been worried about his liver, because three months ago he had suffered from acute hepatitis; he was afraid he might have a relapse.” Ha presents the shortest sentences of all in his dialogue. For example, this exchange between Mr. Chiu and a policeman:

“See, you dumped tea on our feet.”
“You’re lying. You wet your shoes yourself.”
“Comrade Policeman, your duty is to keep order, but you purposely tortured us common citizens. Why violate the laws you are supposed to enforce?”

The policeman’s speech is even more clipped than Mr. Chiu’s. It portrays the policeman’s relationship to the authoritarian government. He has to say very little for his consequences to be understood. Mr. Chiu, on the other hand, in his longish sentence, is trying to assert his rights within the very system that is denying them. Though his sentences are longer, he is speaking the same terse language. Although the abruptness of Ha’s sentences could be a function of writing in a second language, they could also be carefully crafted to make the reader feel the tight constraints of the government and by consequence the society that the characters feel.

Contributing to the sparseness of Ha’s sentences is the fact that he uses few adjectives. The adjectives he does use are more often merely descriptive: sunny, stout, and wet. The most dramatic adjectives he presents are athletic, sallow, and spacious. I was left wondering if the setting was as truly unremarkable as he portrayed it, and I felt the disinterest of the characters in the world around them. Mr. Chiu had never been in Muji before, but he notices on no beauty or ugliness, only the activity of people. This led me to believe that the world Ha was writing about was one in which beauty, and by consequence joy, had no place. I felt the flatness of Mr. Chiu’s life.

In a world of arbitrary rule, Mr. Chiu was only able to seek justice through an act of subversion after the fact. Ha highlights the “after the fact” feeling by sending the reader this teletype: “Within a month over eight hundred people contracted acute hepatitis in Muji. Six died of the disease, including two children. Nobody knew how the epidemic had started.” It is a spit in the face, a final laugh for Mr. Chiu, but it is a punch line delivered after all the actors have left the stage. The bare presentation of the facts conveyed feels as unsatisfying as the act must have been for Mr. Chiu. There is revenge, but no justice, for Mr. Chiu.

My own characters are very different from Ha Jin’s. They have hope for a life beyond their circumstance and when they act, it is with the understanding that despite the odds, there are potential personal rewards. They exist in a world worth fighting for, and I’d like to think my sentences convey that sense of beauty and ugliness that come together as life. If I need to present a situation or a character that is tightly regimented, I can learn from Ha’s tight, short sentences, and if I need a world that feels flat and hopeless, I will consider paring adjectives down to the most essential.

If this review made you want to read the book, pick up a copy of The Bridegroom from Powell’s Books. Your purchase keeps indie booksellers in business and I receive a commission.