On days when I’m feeling more like a book reviewer than a novelist, I read books about writing instead of novels. This writing advice from authors usually helps me get back into the writing spirit. When talking about their relationships with their writing, almost everyone hits at least one note that feels familiar, and I find comfort in the camaraderie. This week I had the wonderful luck to catch two completely different takes on writing from Steve Almond and Orhan Pamuk. Though wildly divergent, they were perfect complements to one another.

This Won’t Take But a Minute, Honey

I first found out about Steve Almond through The Lit Series at Richard Hugo House. In preparation for the event, I watched his video about Toto’s “Africa.”

And then I watched the video again. And again. And again. Almond’s reading at Hugo House was thoughtful, creative, and irreverent, and I picked up this tiny, self-published book, This Won’t Take But a Minute, Honey without even caring what precisely it was about. 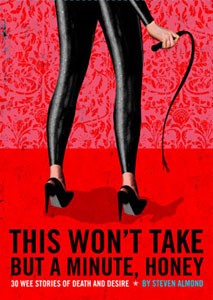 I finally started reading the book this week because I had 20 books left to read to meet my 2012 reading goals and I thought I could power through the 70 pages and move on to the next thing. I was so completely wrong.

Instead, I found myself immersed in these sassy essays about what it means to be a writer. Starting with the wonderfully self-deprecating “Potentially Truthful Statements Regarding My Other Books,” the comments on creativity were not only spot-on, they were hilarious and useful for artists of all stripes. The book was too good not to share, so I read most of it aloud to my husband. When he left the room, I read it to myself first and then read to him again when he came back.

Almond calls us writers out in true tough love fashion on the things that make us writers—the messianic ego and withering self-criticism—and on the things we must cultivate—the bullshit detector. But he’s not standing on the sidelines telling us to be better writers, he’s condensing all the things we already know and he’s saying, “I’ve been there. And you really do have to fucking do this.” That’s not actually a quote, but it could be. Foul-mouthed and real, the essays bleed into one another and build toward this fantastic and tiny writing boot camp.

”For the rest of us, writing is basically flagellation, an undertaking that promises ecstatic release, but mostly feels like torture. I will do anything to avoid writing. I hate every second of it. The only part of the process I like is having written” – Steve Almond

Once you’ve read all the essays, you’ll realize you can flip the book over for a quick selection of stories.

The Naïve and Sentimental Novelist 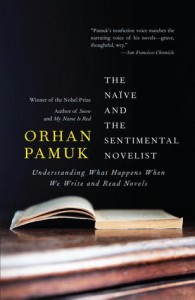 I picked up The Naïve and Sentimental Novelist by Orhan Pamuk later in the week because of the author, not because I thought I still needed a shove towards writing. If you have been reading this blog for a while, you know how much I love Pamuk—in fact, there he is, quoted at the very top of this page, just below “A Geography of Reading.” He is perhaps the writer I feel most akin to in all the world—an intellectual who struggles to find his inner artist and who blends politics and humanity in his work. I kind of love him. Mostly I want to be him.

I’ve read nearly everything Pamuk has had translated into English, but I hadn’t yet read The Naïve and Sentimental Novelist, his collected Norton Lectures. It was the right size to finish during this reading challenge (I can read about 200 pages in a day) so I stopped saving it for later and dove right in.

Pamuk starts out from the point of view of a reader and looks at how we experience books as we read them. As writers, we are first readers and all the books we have ever read have been teaching us, but sometimes it’s easy to forget that we are building experiences for people like us. We don’t have to write with our audience in mind, but we should be aware of the effects we are creating on the page.

Pamuk goes on to talk about the ways we blend fiction and reality and whether we really want to even separate the two. He also covers topics like experiencing the world through the eyes of a character unlike you, how we visualize when reading, and writing to the center of the story as a search for the meaning of life. It’s a beautiful book and also very personal. My copy is heavily underlined already and I look forward to visiting it again and again.

“The experienced novelist goes along knowing that the center will gradually emerge as he writes, and that the most challenging and rewarding aspect of his work will be finding this center and bringing it into focus” – Orhan Pamuk

I have 12 books left to read this year, and then I’m going to get back to writing that next book. Pinkie swear.

Other Resources for Writing Kinship

Leave me a quick note in the comments to share your favorite sources for writing kinship and then get your ass back to writing.

Pick up a copy of The Naive and the Sentimental Novelist from Powell’s Books. Your purchase keeps indie booksellers in business and I receive a commission.

I took a long time to finally pull Other Colors by Orhan Pamuk from my to-read pile. I was afraid Pamuk’s essays would be too scholarly or didactic or that they weren’t quite what I needed at the time. I was afraid of their sheer number and that I would be reading something disjointed and trying. I was afraid they wouldn’t live up to his fiction.

What I found was an uncommonly generous spirit who brought his own thoughts to the table and opened up room for mine. Each of the short essays wove together into the larger themes that obsess Pamuk and filled out my understanding and love of his novels. And the Nobel speech inspired me with his faith in the world and in community. This week Pamuk became my friend in letters. I invited him into my home for deep conversation about things that matter and afterward I felt inspired and opened. Though he will never sit in the brown leather chair in my office, his writing somehow makes me feel like the appreciation is reciprocal. And that is a gift from a gifted man.

If this review made you want to read the book, pick up a copy of Other Colors from Powell’s Books. Your purchase keeps indie booksellers in business and I receive a commission.