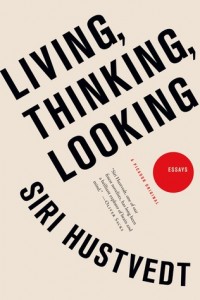 I have no clue why I’ve been drawn to essays lately, but when I saw Living, Thinking, Looking at the bookstore, I thought “I liked The Summer Without Men, maybe I’ll like Siri Hustvedt’s essays, too.” I had no idea that I was on the verge of finding my authorial twin and a source of constant inspiration.

Spanning Disciplines and Tickling My Brain

Siri Hustvedt isn’t writing your standard, “I think this, so you should too” kind of essays. Instead, she’s bringing insights from neuroscience and psychology to fantastically thoughtful essays on creativity, art, and life. The result is a book filled with deeply personal, but also wildly open, essays on topics that matter to me and not only inspire me to think more broadly about the world around me but also provide me with new frames for seeing that world.

For example, in “Critical Notes on the Verbal Climate,” she calls out how fear-based political speech preys on our limbic systems. She discusses the need to divide, our tribal natures, and George W. Bush’s angel/devil discourse. She delves into the hypocrisy of a nation that bases itself on freedom yet “curtails civil liberties at home, defies the Geneva Convention for prisoners of war, and through ugly legalisms, sets in motion a justification for torture.” The result is a political commentary that directly pinpointed the reasons I struggle to reconcile my political ideals with our current reality, and is, unfortunately, equally timely now as it was when she wrote it in 2005.

Other topics Hustvedt helped me understand more deeply include: the tyranny of the desire to please, the nature of truth in autobiography (something I’ve been wanting to write about but have now seen done better than I could ever accomplish), and the importance of narrative not only to fiction but to life.

Living, Thinking, Looking inspired an incredible storm of brain activity for me. As I slowly read through this book (something I only do with the best of books), not only was I soaking the pages of the book with ink, I was also tweeting up a storm of quotes from Hustvedt:

I don’t write about art to explain it but to explore what has happened between me and the image – Siri Hustvedt. AMEN!

“Any discourse that demonizes other people, near or far, is a betrayal of the idea of freedom” – Siri Hustvedt’s “Critical Notes on the…

Best of all, Hustvedt sparked me to think more deeply. She showed me that, rather than being a scatterbrain, being interested in a diverse array of topics might actually be a strength. I realized that there are parts of my life I’ve been trying to keep separate (work and writing) that might function better if I integrate them. And she inspired me to write a manifesto to both gather my thoughts and to commit to making great work in the way that feels true to me. She also sparked me to speak out about the social media shaming that seems to happen when people express sympathy about tragic events in the western world.

Something else came from the inspiration and kinship I felt in the pages of Living, Thinking, Looking—I also started to better understand my relationship with my father. I adore my dad in the way that many daughters do. I’ve looked up to him and wanted to be like him and also to earn his approval. But I’ve sometimes struggled to understand the difference between things I want for myself and things I think would please him.

Hustvedt’s father is also a professor, and like me, she’s chosen to be a writer rather than following in his footsteps. In her essay, “My Father/Myself,” I could relate not only to the loving relationship that she portrays but also to the distance she sometimes feels from him. She delves into the nature of fatherhood, where that distance comes from, and how necessary it might be. It’s incredibly poignant to read how much she ached for a friendship with her father and how long in life she had to wait for that to occur.

Some of the brightest moments of my life have been when I felt that kind of friendship with my dad. Thanks to a nudge from my husband, he even reads this blog and sometimes I get the sweetest email replies about posts. Reading this book, I understood how much of my desire to be a thinker comes from that emulation of my dad, and I realized that my rejection of the life of a professor isn’t a rejection of him. Instead it’s me finding my own way to live out the values we share.

Our lives are very full and often overly busy. When my dad celebrates his birthday is in eight days, I won’t get to be there like I was last year. But I’m grateful to have a better understanding of our relationship. And I’m grateful to be able to tell him here, publicly, how important the moments we can share an adult friendship are to me. Happy birthday, Dad! I love you.

If you want Siri Hustvedt to stretch your thinking, pick up a copy of Living, Thinking, Looking from Powell’s Books. Your purchase keeps indie booksellers in business and I receive a commission.

I took a long time to finally pull Other Colors by Orhan Pamuk from my to-read pile. I was afraid Pamuk’s essays would be too scholarly or didactic or that they weren’t quite what I needed at the time. I was afraid of their sheer number and that I would be reading something disjointed and trying. I was afraid they wouldn’t live up to his fiction.

What I found was an uncommonly generous spirit who brought his own thoughts to the table and opened up room for mine. Each of the short essays wove together into the larger themes that obsess Pamuk and filled out my understanding and love of his novels. And the Nobel speech inspired me with his faith in the world and in community. This week Pamuk became my friend in letters. I invited him into my home for deep conversation about things that matter and afterward I felt inspired and opened. Though he will never sit in the brown leather chair in my office, his writing somehow makes me feel like the appreciation is reciprocal. And that is a gift from a gifted man.

If this review made you want to read the book, pick up a copy of Other Colors from Powell’s Books. Your purchase keeps indie booksellers in business and I receive a commission.