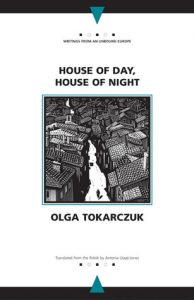 Bless the books that find you at just the right time in your life. I first started hearing about Olga Tokarczuk and House of Day, House of Night this past fall, received it for Christmas, and started reading it the weekend after my grandfather (Djiedo) died. The book so perfectly met me where I was that I felt as though Tokarczuk was sitting at my side, comforting me with stories and reminders that the best things in life are unknowns. No matter that the book was first published 31 years ago on a different continent in a language I barely speak anymore.

I did not know what Tokarczuk was doing when I read the first seven pages of House of Day, House of Night, but I was in love enough to recommend it to everyone at the cabin where I was staying. I knew the book was about a town in Poland that had once been German and then the Germans had been relocated, the empty town filled with Poles from the side of the country that was now Russia. But that’s not how the book starts at all.

It begins with a dream.

“The first night I had a dream. I dreamed I was pure sight, without a body or a name.” – Olga Tokarczuk

Writing teachers always tell us to focus on our opening words and to hone them until they slice open a reader’s curiosity. Achievement unlocked. The dream continues for a page as the narrator hovers over a valley as she seeks her location in space, consciousness. And then it ends.

The tone shifts in the next section as we encounter the quotidian details of the narrator’s home and life including meeting her mysterious neighbor, Marta, a woman whose life details are as elusive of my understanding of this text. I had no idea where Tokarczuk was taking me, but I loved it and trusted her with my fragile psychic state.

The Power of Linked Stories

Linked short stories go in and out of vogue, I think, because so few people do them well. Creating a world that’s larger than one character’s lived experience seems like a great idea. It allows you to see things from a broader perspective and to understand the world as myriad. I’m in. But the temptation to over-fill the blanks between characters is huge, which can result in a world where we know too much about too little. Other writers react to this temptation but linking the stories so sparsely that they become a “Where’s Waldo” where only the truly cool kids are in on the linkages.

Tokarczuk, though, manages her links just right. Maybe it’s because the characters are odd enough, maybe because they’re inhabited enough, maybe because there are connections we clearly see but can’t understand—the result is that we feel as though we are truly in a town full of people as weird, normal, knowable, and mysterious as our own neighbors. There’s Marta from next door (a woman who may or may not be a mushroom), a lycanthropic classics teacher with a fascinating (but hidden) life story, a hermaphroditic saint (and the scholar monk who worshipped them), and a German man who returned to this town to find who he once had been (only to find a final truth), plus a comet, an eclipse, and cloud-based divination.

Fascinating, right? With a list like this, House of Day, House of Night could have been a veritable circus side show except that each of these characters and ideas is so carefully, so literarily, so humanly handled that they feel like a beautiful part of our every day. Which they might be. My Djiedo was a prize fighter, a trumpeter, a coal miner, a professor, an editor, a father, and a presidential advisor. My father has been a pilot, a forester, an economist, a hippie, a Voyageur, a professor, and more. And I, a marketer, mom, wife, poet, novelist, and essayist have lived on three continents and speak five languages. The stories we don’t know about our friends and neighbors are myriad.

Which reminds me, you can put anything in a book if you’re willing to be open to how weird life is and how it’s part of a larger story than maybe you’ve even understood yourself.

“Peter wanted to see his village again, and Erika wanted to see Peter looking at it. She thought it would finally help her to understand him fully, from start to finish, with all his sadnesses.” – Olga Tokarczuk

It helps that much of the story is surfaced in the scenes we see, but it’s also essential that Tokarczuk leaves ample breathing room in the interstices for us to fill in our own rich ideas about the connections therein.

The Not Knowing Bit

There’s something about someone you love dying that changes everything. Even if that person is 103 and their death is a mercy. You wonder if you did enough, if they knew they were loved, if holding onto objects will help you hold onto them, if you even should hold on, what your own aging and death will look like, how you can possibly afford forty years of retirement.

Not only did Tokarczuk touch on some of these topics, as with this lovely look at the aging of garments:

“I could see that they were wearing out, going at the seams, softening and getting older all by themselves without my input. And there was a sort of beauty in it, the opposite of ripening.” – Olga Tokarczuk

She also reminded me of the beauty of simple, thoughtful exploration:

“When you’re travelling all you really encounter is yourself, as if that were the whole point of it. When you’re at home you simply are… You can put yourself to one side—and that’s when you see the most.” – Olga Tokarczuk

That in my mourning, I was doing the work I needed to do in order to eventually heal. Here are some other ideas Tokarczuk left me breadcrumbs to explore:

I still miss my Djiedo. If the trajectory of mourning for my Baba holds any clues, I always will. But House of Day, House of Night helped me feel part of a greater, unknowable world in the days when I needed it most. And I will love this book and Olga Tokarczuk always for that.

“She recognizes an era not by the people who were alive then, because people are woefully similar to one another, but by the colour of the air and the leaves, the way the light fell on objects.” – Olga Tokarczuk

Embark on your own Tokarczuk adventure, pick up a copy of House of Day, House of Night from Powell’s Books. Your purchase keeps indie booksellers in business and I receive a commission.