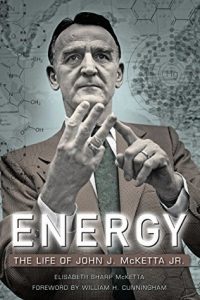 Not many people have the fortune to read a biography of their grandfather. I feel especially privileged to have just finished reading Energy: The Life of John J. McKetta Jr. while my beloved grandfather, a man I call Djiedo, is still alive at 102. Written by my cousin, Elisabeth Sharp McKetta, this loving portrait not only brought me closer to my roots, but in doing so helped me find comfort in a time gone awry. It is impossible to impartially review this book, but I do want to share some of the lessons I learned while reading it, because, while some are very personal, I think they can help more than just me.

Humans Are the Best of What We Have

One of the lessons drilled into me as a child by my father who learned it from Djiedo was how a person’s worth was not tied to what they did for a living. This is something that’s been top of mind lately as the Republican Party seeks to reward donors and reinforce the growing divide between rich and poor in the US. And it wasn’t until I read “wealth can never be a measure of worth” in Dan Rather’s poignant Facebook note that I could pinpoint exactly what my discomfort with recent events was. I assumed we all thought that wealth wasn’t a measure of worth. Naive, perhaps, but also a worldview that forms who I am.

The value of humans rather than wealth seems natural for a man who rose from coal miner to university chancellor and presidential advisor, but it’s one that’s all too easily forgotten. It’s one we mask by talking about “a man being the sum of his actions and not his inheritance,” but judging by how much of Djiedo’s admittedly fantastic rise was influenced not just by his drive but by the support of others, human connections are the only real wealth in the world.

Something I’ve feared desperately since I got laid off last year and Trump was elected is how I would take care of my family in an economic downturn, or worse, a war. Reading Energy, I realized that worry itself was a luxury. When the Great Depression hit the McKetta family, they were poor enough to not have much to lose. It was the Smith family, my grandmother and her parents, whose fortunes fell because they did. I have a home, bank accounts and a cushy corporate job, but this book reminded me that it’s my loved ones who matter. Tragedies can happen there, too, and did to my Djiedo, but I can’t live in fear of those, either, because life goes on and we carry our people with us.

Connections Can Last a Lifetime—Or More

Speaking of people I love, this book reminded me that family is what you make it. I did know that, but in the past three years of pregnancy, birth and raising an infant without any close family nearby, I’ve let myself get pretty isolated. What a wonderful feeling this week to pair the addressing of my Christmas cards with reading in Energy about how Djiedo kept in touch with so many people who touched his life for so long.

That actually brings up a funny story. Dr. Eugene P. Schoch started the Chemical Engineering department at the University of Texas that’s now named for Djiedo, and when Dr. Schoch recruited Djiedo, he, Baba and my infant father lived in a building behind Dr. Schoch’s house. On my Christmas card list is a Stephanie Schoch—the great-granddaughter of Eugene. I met Stephanie two years ago when I used AirBNB to book the building behind her house so that my husband, my infant son, and I could attend Djiedo’s 100th birthday party. Point being that the world is small and we can let it feel large and unmanageable or lonely but it doesn’t have to be. Those connections are there if we preserve them—as Djiedo has and as I’m relearning to.

Honestly Learning from Anyone You Can

Some of the people Djiedo kept in touch with were his mentors. One of the most beautiful things Elisabeth did in Energy, and I’m sure this was blessed by Djiedo’s stellar recall and generous willingness to share attribution, was to trace some of the most important and memorable parts of Djiedo’s character to his mentors.

This is an excellent reminder that not only are our lives touched every day by people we can learn from, but we touch lives too. In a time when so many “mentors” and men in power are being called out for sexual harassment, abuse, and assault, perhaps one of the most important things we can all do is to look at our own behavior and see where we have failed those who looked up to us and how we can not fail next time. There’s an anecdote in Energy about Djiedo being confronted with his own sexism. While I think he came by his beliefs honestly (from his culture, his family, his time), what is very much to his credit is how open he was to learning a new way to be. I hope I have the courage to learn as well from my own mistakes.

The Advantages of Staying Busy

Busyness is what makes Djiedo the man he is. On days when you’re not prepared for this energy, you might call it frenetic, but it’s also a key to his success and to who he is. Instead of going off to college to find himself like so many of us do, Djiedo launched a personal campaign to get himself admitted to a university and then worked three jobs to ensure he had food and shelter while he obtained that degree. As a professor he was an editor (something I did not know), a lecturer, a board member, and also a presidential advisor. This is a pace I believe he sustains even now. Though at 102 he sleeps many more hours than he used to, I know from personal experience that there is not a minute wasted in his day as he keeps up with old acquaintances and feeds his busy brain.

As an inheritor of this type of energy, it certainly feels frenetic in my chest, especially as I woke at 4am all week to read about Djiedo during hours I usually describe as “McKetta early” because so many of Djiedo’s descendants greet the dawn way before the sun is ready to get up. But I know this energy is also what allows me to find time in the week to have a corporate career while spending time with my son and also writing books.

What’s painful to admit is that I’ve let my own busy life become an excuse for avoiding visiting Djiedo. I wondered often while reading Energy how the type of career that allows one to become a presidential advisor affects the family back home. Although Djiedo lived the ideal male role of his time, I’m not sure the time away from family is something I want for myself and I see that my choices aren’t reflecting my values. I’m afraid of losing him the way we lost my grandmother, Baba, but we will lose him eventually and staying away only squanders an opportunity.

Baba, the Heart of it All

The hardest part of this book for me to read was the section about Baba’s decline and death. Not because she wasn’t ready to die, she had been for a long time, but because she was the heart of us all. I witnessed Baba’s moderating effect on Djiedo that Elisabeth describes in Energy and I know that from my love of reading to the deep patience and quiet I am capable of, a good share of who I am comes from her as well. Being in Baba’s very presence was a grounding, healing experience for us all, and while she was more than ready to go, I think we all will miss her always. I’m grateful to Elisabeth for the ways she wove Baba’s story in with Djiedo’s because I think I, and my son, have lessons to learn from incorporating both types of energy into our lives.

We Are the Legends We Leave Behind

As I was reading this book, my son slept down the hall, and I kept thinking what a privilege it is that he’ll have a book about his great-grandfather to pore over when he’s ready. He’s even in one of the pictures. Though the audience for Energy might be limited to the people whose lives John J. McKetta has touched, that touch is profound and the audience engaged.

If you are a parent or a grandparent, please write your stories down. Not in ones and zeroes but on paper where a curious child or grandchild can find them later and begin to understand where they come from and how that has made them. This is not the first book I’ve read about Djiedo—two decades ago he gave our family individual copies of an autobiography entitled My First 80 Years—but Energy gave me a rounder portrait of my family in a time I most needed it and I will read it again.

Although I remember some of the legends differently, so goes family lore. I am grateful to have a canonical reference for my son that’s more trustworthy than my faulty memory. And I’ve annotated my copy with extra details where I appear so that he can come to know me better someday.

One of my favorite movies has always been Big Fish, especially the ending when all of the characters from the father’s mythic past converge to bid him farewell. It’s a gorgeous celebration of a full life well lived and also a reminder that the way we choose to remember our history makes us who we are now. I hope we have a long time before Djiedo’s final celebration (and not just because I need to book a plane ticket), but if his 95th birthday party (attended by 650 people) and his 100th (rich with family in an event kept intentionally small) are any indication, it will be sprawling people whose lives Djiedo has touched. I am lucky to be among them.

To read this portrait of a man I love very much, pick up a copy of Energy: The Life of John J. McKetta, Jr. from Powell’s Books. Your purchase keeps indie booksellers in business and I receive a commission.