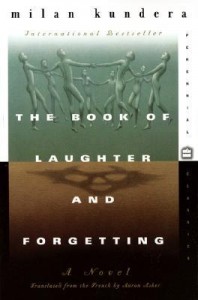 I picked up Dubravka Ugrešić’s Lend Me Your Character to work my way through the lingering jet lag from our trip to Croatia and to soak up a little more information about the human side of the Bosnian War, but sometimes you get what you need not what you ask for. Because most of the stories in the book dated from the 1980s, I got to read about pre-war Yugoslavia—something I had been craving when reading Saša Stanišić and Ismet Prcic. Though constrained by the Iron Curtain, Steffie’s life is remarkably and enjoyably ordinary.

Ugrešić has always challenged my expectations as a reader. In The Ministry of Pain, she shocked my sensibilities and created a direct pipeline to what it must feel like to be without a country and a language. In The Museum of Unconditional Surrender, she pieced unrelated fragments together to convey the experience of a fractured life. The initial novella in Lend Me Your Character is similar in construction to The Museum of Unconditional Surrender, but the tone is delightfully different.

Ugrešić calls “Steffie Cvek in the Jaws of Life” a patchwork, and that’s just what it is, figuratively and literally. Using fragments from Madame Bovary, advice from women’s magazines, and sewing instructions, Ugrešić creates the story of Steffie’s misadventures in love and life. Though Steffie is depressed, the narrative is playful enough that I was optimistic for Steffie. But it isn’t just the tone that I loved. Ugrešić manages to make feel like a collaborator not just a reader. As we stitch together the narrative, she tells me about the choices she is faced with, how she makes them, and the options she discards (including an entire section on what she could have written for one of Steffie’s love affairs). The casual, inside view of a story could feel haphazard if it wasn’t so masterfully handled.

I don’t know what’s next in this book, but I am looking forward to seeing how Ugrešić will challenge me. I do know that I have a lot to learn from her about successfully fracturing a narrative—something I look forward to using in my next book.

If this review made you want to read the book, pick up a copy of Lend Me Your Character from Powell’s Books. Your purchase keeps indie booksellers in business and I receive a commission.