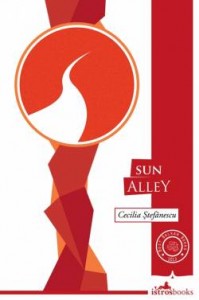 This week I am surrounded by Romania from a thought-provoking post about what people will do for a better life to a search query for my favorite tea that instead returned an album of Romanian celebration music (in French). It all started in Sun Alley, Cecilia Ştefănescu’s award-winning novel about the intoxication and torment of forbidden love.

From the moment the young Sal first sees Emi joyously cutting apart his friends’ most prized magazines, he is enthralled with her and does everything he can to overcome the friends, parents, and life that try to keep them apart.

More than a retelling of Romeo and Juliet, though, Sun Alley allows the characters to grow up. In fact, what I enjoyed most about this book was the split in time. Just as we are preparing to find out what happens when Sal and Emi prepare to run away from Sun Alley together, the time period flashes suddenly forward to an adult Sal and Emi. We discover that their attempt to flee was unsuccessful (as seemed inevitable) but we don’t learn why or how until much later.

Instead, Ştefănescu keeps the unfinished quality of their love affair in sharp focus. Though they are married to other people, they again find that they cannot bear to be apart and embark on a long, adulterous affair with all of the usual stakes. I’m not trying to be flip, but it’s obvious that husband, wife, and children cannot keep Sal and Emi apart any more than friends and parents could.

Their childhood separation is alluded to over and over as the chapters flash back and forward in time which creates a delicious tension because although we know they are (somewhat) together now, we are constantly reminded how fragile that relationship is because it has been broken before. The wonderful structure conceals as much as it reveals and I started to think about how our shifting memories betray us over time.

“He cringed in terror. He knew quite well what was on that table. It was someone. A human being, a body, a creature.” – Cecilia Ştefănescu

There is a second mystery in this book, that of a dead body young Sal finds in a basement one afternoon. It’s a truly creepy scene and made me think about how children really act versus how we like to think they act. I think this book erred on the side of how they really act, though, and it was a good lesson for me about not being squeamish about letting your characters follow their paths. I’m glad Ştefănescu didn’t take a more restrained approach to Sal’s interaction with the body, but I do wish that the body subplot was a more integrated part of the story throughout. There were echoes of it and the resolution (which I will not spoil for you) is just right, but I lost the trail sometimes as I focused on Sal and Emi’s love affair.

Details show a reader where to focus. When something is important, a writer will often layer in more and more detail to signal to the reader that it’s time to really examine a scene. In the case of Sun Alley I was lost in the detail for nearly all of the first chapter. There are readers who love having every sense titillated along the way as they enter a world. I usually look for a bit more guidance and this overly detailed beginning left me grasping for understanding.

“He thought a while and then lightly touched the cockroach’s hump with his nail. It stopped, curled up and slowly moved its legs, seemingly begging to be left alive. Sal lifted his finger and sat down on the kerb next to the cockroach.” – Cecilia Ştefănescu

This is a stylistic choice and some very popular books like Atonement use the same approach. On rereading this beginning, I found that Ştefănescu does as good of a job at tying these descriptions to her overall theme as McEwan does (which is to say she does it very well), but it still drives me a little nuts.

One of my favorite parts of the book is a fight that Sal and Emi have at the end. I won’t quote it for you here because I don’t want to reveal too much, but writing a good, tense dialogue is something I struggle with. Here Ştefănescu lays out two characters who are standing their ground firmly and we as readers can see that there are moments when they are talking about completely different things without realizing it. So there is conflict and tension and possible resolution but the scene is so well written that I can easily believe one might never see what the other is truly saying. That’s an art and a delicate balance and Ştefănescu does it very well.

Although the ethnologist in me hoped that something about this book would come off distinctly Romanian and I’d learn more about Ştefănescu’s country of origin, I was not at all disappointed to find instead a book that will appeal to anyone who has ever experienced the joy and suffering of forbidden love.

If this review made you want to explore Sun Alley, pick up a copy from Powell’s Books. Your purchase keeps indie booksellers in business and I receive a commission.

In The Size of the World, Joan Silber relates six linked stories from the first person point of view of six different narrators. Using word choice, tone, and sentence length, Silber provides insight into the character through the distinct sounds of their voices.

Toby is an engineer in Arizona who is sent to Viet Nam to explore defects in the guidance systems of fighter planes during the war. He speaks very directly using short sentences like: “I liked getting lost in projects.” His sentences are often six or seven words long and rarely more than two linked clauses. This gives him the clipped sound of someone who works with data but who is a loner. He uses clichés: “Ernst slept like a baby” which makes him seem like an unlikely narrator—like words are unimportant to him. He works with a man named Ernst who is even more removed (someone comments that he may have Asperger’s) and has his own terse phraseology, often speaking in two or three word sentences: “‘Can’s gone’…‘as in dead.’”

Kit was Toby’s high school girlfriend. He thinks she is vacuous and dim. Her initial voice indicates that she is not a serious person and she uses alliteratively comical phrases like, “sanctimonious sharpie.” After running into Toby, she asks herself many questions: “The world wasn’t all sex, was it?” and “[a]nd what did I want from Toby anyway?” which makes her sound uncertain and lost with a bit of self-loathing peppered in. After being manhandled by the police in Mexico, her voice loses most of its brightness: “I was oozing money, and his country was a hobby to me.” And this tone follows her throughout the rest of her section as she flounders through life never really regaining the lightness she started with.

Corinna is older than Kit and Toby, though she is first presented in her youth. Her voice is prim and her phrases like: “the sort of boy” and “quite decently” sound proper like those of someone from her generation. She is actually a very free spirit who moves to Siam after losing her parents and falls for her brother’s Malay guide. But when she speaks, she is very candid about even risqué subject matter such as having premarital sex in the woods, but she is roundabout with her phrasing: “I still bled every month” instead of saying she wasn’t pregnant. She is a woman confined by her generation not by her spirit.

Mike is a professor who is divorced and meets his high school sweetheart later in life and has a second chance at love. He is full of regrets but resigned to his life as in the following passage: “I suppose I always thought I would have a family, though not so fast” and “[b]ut later I was sorry I hadn’t gone.” He uses “but” and “though” over and over as a sort of “if only…” and the reader understands that his life is not what he wanted to make of it if he had travelled, if he had slowed down, if…

Annunziata is another older woman who was born in Sicily and immigrated to the U.S. after World War II. Her voice loops back on itself as she introduces a topic, e.g. hating America when she was young and then engages in a long digression only to come back to the original point she made. This gives the reader a rich understanding of her background but it also takes on a feeling of her living in the past because she is always delving into the history of what brought about the events. She comes off as richly interesting rather than efficient and interested in moving forward.

Owen is Kit’s brother. When we first meet him, he is still living in Siam although he is starting to feel used up. His tone is caustic, even when addressing his sister either telling her about his latest adventure: “‘The whole cold-blooded enterprise’” or responding to her attempts to lighten the mood: “‘Don’t be suave and brittle, please’…‘Now is not the time.’” When he comes home he is depressed and it shows in the lack of enthusiasm in his language as he describes, “unspeakably dull dinners.” His life is unsatisfactory: “I was not what I’d once been” and he describes having “humiliated myself” during his Depression-era job search. This is a man who held himself high and above others. When he comes home he is faced with the reality of who he is. He becomes a salesman, and struggles even at that. His self-image of the independent adventurer is dashed if it even was ever true.

By giving each character a unique voice, Silber is saying more about them and in a more palatable way than if she had simply outlined the characteristics of these characters. The characters are fully realized in their narration and when they engage in dialogue. She even portrays the individual voices of more minor characters. Silber has created a very rich world of characters and at the end I felt like I understood a little of the individual natures of each of them.

If this review made you want to read the book, pick up a copy of The Size of the World from Powell’s Books. Your purchase keeps indie booksellers in business and I receive a commission.