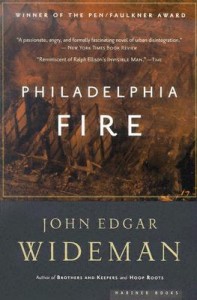 In the novel Philadelphia Fire by John Edgar Wideman, Cudjoe, has returned to Philadelphia to find answers about a horrific event that happened on Osage Avenue in 1985. By withholding the bare facts of the case, Wideman puts the reader alongside Cudjoe as he searches for information and insight in an insular neighborhood.

Interestingly, in the first half of the novel the narrator has significantly more information than he is coherently conveying to the reader. As does Cudjoe. The novel begins in a dense style where the reader is trying to gain some bearing of what’s going on. The language is richly descriptive, but there are few facts to ground the narrative so the reader floats through a phantasmagoria. The flap copy and title clearly refer to a fire, but the first sentence is, “On a day like this the big toe of Zivanias had failed him.” The action is taking place in Mykonos and the fire isn’t even mentioned until page 7 with the cryptic nursery rhyme, “Ladybug, Ladybug. Fly away home. Your house is on fire. Your children are burning.”  I wonder if the first few pages would have held my attention if I hadn’t known already about the fire.

Lost in the Smoke

The effect is dizzying. The reader is trying to gain ground and understand this horrible event. When Cudjoe reaches Philadelphia, fire-related details begin to seep into the narrative: “[h]er other names are smoke curling from smashed windowpanes of the house on Osage.” But the language is metaphoric and little concrete information is offered about the causes of the fire and why the police shot those escaping (the bare facts of this information are obtainable only from the second half of the book or the book’s jacket).

Cudjoe asks people all over West Philadelphia for their take on the fire and for information on the whereabouts of the boy who escaped. However, the people in the neighborhood know he has come back from outside and don’t want to rehash the story with him or with the reader peering in from outside (a reader is more than an abstract concept here; Cudjoe tells them he is writing a book).

When Cudjoe tries to insert himself into this world that he’d been away from, the inhabitants like Margaret Jones resist him: “[s]he knew he’d been away…and that distance bothered her.” She will give him vague anecdotes about the leader of MOVE but even less information on the boy, Simba. The reader feels the role of the outsider as well, Margaret Jones says, “[w]asn’t any trouble till people started coming at us” and Cudjoe and the reader are more people coming at them, disturbing the status quo, “[w]e’re not looking for help from you or nobody else…Somebody called himself helping is the one lit the fire.”

The Facts Seep In

Information is offered about the aftermath of the fire itself: “the boy was last seen naked skin melting…A sharpshooter on a roof…The last sighting reports the boy alone.” It is clear at this point in the narrative to Cudjoe but not the reader that there was a fire on Osage Avenue started to get rid of the group MOVE. Cudjoe and the reader know that the police shot at those escaping and that a boy was seen alive, but neither Cudjoe nor the reader know what happened to Simba. The reader is immersed in his quest, and every time Cudjoe approaches someone new the reader is as thirsty for information as Cudjoe is.

The Narrator as Outsider

It is an interesting premise to set a book inside a closed society. Usually, though, I would expect such a book to be narrated by someone who is inside the society and to gain a glimpse of the inside I would otherwise not see. Because this book is from the point of view of someone who is no longer in the fold, what I learned about West Philadelphia instead was how closed it is. It was much like seeing how tall the wall is rather than catching any clear glimpse of life beyond it.

The language was striking, but without facts to ground it, the words, e.g.: “it’s Technicolor high noon” became bricks in the wall separating me from this culture. I could see it and appreciate it but not truly understand what was going on inside. Wideman seems to be making the point that the actions of the police on that day are inexplicable but not unexpected to the inhabitants of West Philadelphia. As an outsider, I am left with an understanding of how different their world is from mine and reminded that there are never satisfactory answers in a case like the fire on Osage Avenue.

What I learned from this novel is how easy it is to raise expectations for the reader. Humans (especially readers) are curious creatures and we are easily tantalized. In fact, I was so drawn in by the premise of this book that I allowed Wideman to illustrate for me the character of a neighborhood I wouldn’t have read about otherwise.

However, I felt unfulfilled at the end of the novel. I was hoping for some sort of redemption. I can accept the larger message that there is no redemption and no true comprehension of a case like this, but I still feel something missing. I don’t want to write too much with the expectations of a reader in mind, but I will keep it in the back of my mind as something to consider when I am revising.

My experience with this book was somewhat of a generational one. I’m told that the news events this book is based on made national news. I wonder if Wideman considered his audience’s familiarity with those events as he wrote the story.

Have you read this book? How did your knowledge (or lack of knowledge) about the fire affect your experience of it?

If this review made you want to read the book, pick up a copy of Philadelphia Fire from Powell’s Books. Your purchase keeps indie booksellers in business and I receive a commission.