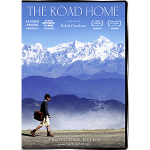 I understand why we use stereotypes. They are easy shorthand in a world where we don’t want to take the time to look deeply at the people around us–beyond their clothes and their gender and the color of their skin. But running around judging each other based on these exterior factors means we miss the richness of the lives around us. Rahul Gandotra’s short film The Road Home beautifully exposes this paradox.

The film starts with a young boy running away from boarding school in the Himalayas. And it’s easy to assume from his brown skin that he belongs there, but his blue polo and nattily knotted sweater stand out. It soon becomes clear that this boy, Pico, doesn’t speak Hindi at all and he’s running home to England. He hires a local cab driver (Kuldeep) to drive him to New Delhi but Kuldeep hassles him about not knowing his heritage so Pico decides to walk the rest of the way. Along his journey, we start to see how out of place Pico really is–both in India and the world.

“But I Don’t Feel Indian Inside”

Director Gandotra is a true third culture kid having grown up in eight different countries and the screenplay (co-written by Gandotra and Milja Fenger) captures that feeling of being from everywhere and nowhere.

That third culture kid feeling (or as Pico Iyer calls it, The Global Soul) is one I share but not one I talk about very often because I feel like there are so few people who truly understand it. My family is white and I was born in Idaho, but I spent time in Chile growing up and my brother learned to read in Spanish before English. I crave hard white rolls from a certain German bakery and when I say Neruda speaks to my soul, I mean something slightly different than a lot of people do. When I read Isabel Allende’s memoir of exile, My Invented Country I felt that I too had invented Chile, at least in my memories. And then there’s the time I spent in Poland…

I am an American and I mean that in the richest possible way. And sometimes I feel like I have more in common with the Somali girls giggling in the mall in their half-traditional, half-American outfits than I do with the woman at the pretzel shop. But I suppose I don’t know her story either. I never thought to ask.

What Does “Worldly” Mean to You?

In The Road Home when Pico has to be taught how to eat daal by a French woman named Marie, I felt for him and how out of place he was. Then we learn that Pico’s father has sent him away so that he’ll have the proper credentials to get into the London School of Economics and later Harvard so that he can become an international businessman. There was something so elite about it all and yet it rang true. Pico’s experience abroad was a check box for admissions, but he wasn’t ever going to be expected to mix with the locals just as we sometimes travel abroad and have drinks at the Hilton where the bartender speaks our language.

I thought for a moment that I hadn’t aimed high enough with my own admissions process, but I didn’t want to see the world from that pinnacle either, I wanted to be part of it.

When Pico runs into a British couple on holiday. They assume that he’s local and the man tries to speak to him in Hindi. It’s only when the woman addresses him in British English and Pico replies with an accent that’s much more posh than hers that we see he doesn’t fit in in England either–at least not where the couple comes from. He is out of place everywhere.

“What’s So Wrong With Being Indian?”

As I’m writing this, it’s been barely a week since the first Indian American Miss America debacle. If you don’t know what I’m talking about, just imagine a group of people who can only see “other” and how that must terrify them. Poor knowledge of geography and racist comments aside (not that it’s easy to ignore either), these events reminded me how one-dimensional we ask the people around us to be, and I wonder how far we can really get as a world when we fail to see the richness of experience and heritage in other human beings.

So when Marie asks Pico, “What’s so wrong with being Indian?” and in return he asks, “What’s so wrong with being English?” what’s important is that Pico isn’t either. He’s both, and the beauty of this film is how he starts to find that unique blend of his own identity. I’ve spoiled most of the major plot points for you, but this film isn’t about what happens, like the best literary fiction, it’s about how the moments are portrayed. Go watch it. You might be surprised how much you can learn about yourself in only 23 minutes.