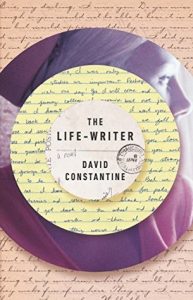 How well do we really know the people we love? It’s a trite question, but one I’d wager most of us ponder at one point or another. In The Life-Writer, David Constantine manages to inhabit both the reality in which we know as little as we fear and the one in which we know enough. It’s the story of Katrin, the much-younger second wife of Eric, and her search through his letters and history in the days following his death to find the person he was before they were married. Perhaps because Eric sets Katrin on this course, using his final hour to describe the first leg of the journey that changed him forever, or perhaps because Katrin’s chosen occupation is writing biographies of little-known people in famous circles who never found fame on their own—whatever the exact reason is, this could-be-pat book is instead a deep, thoughtful, and satisfying exploration of what it means to love.

I live with more than the normal amount of fear that I will lose everyone I love. It comes from an illness my mom suffered early in my childhood that I didn’t properly understand. I didn’t lose her, but ever since I’ve been plagued by the reality that the people I love and depend on could evaporate at any moment. So I can sometimes be found wallowing in crap narratives like The Notebook by Nicholas Sparks that allow me to mournfully sob and then brush off the sadness with the manipulated plot and move on with my life.

So you’d think a book that starts with a chapter devoted entirely to a wife saying goodbye to her dying husband would drop me into my feelings bucket from which I’d emerge at the end of the book. But no, David Constantine is too fine a writer to depend on tropes and cardboard characters. Instead, he held me inside that moment I so deeply fear and made me care so deeply about the characters that I wanted to stay with them through their grief and through their lives. Because Katrin does go on after Eric dies. There is life after death. And though she spends the bulk of the part of her life that this book chronicles looking for the keys to Eric, she also allows herself to be pulled forward into a post-Eric stage of life where “the fact is fixed, but my attitude towards it is mine to fashion as I please.”

“Later, during passages of grief in which love and its sorrow took the form of self-recrimination, she accused herself of harbouring the thought [what about me when you leave me here, aging alone and we were never young together?] as one might a grievance, for some future occasion, to be brought up and deployed in an argument against the person you could not live your life without. Such a sad and cruel argument. For by then he was not there to answer back.” – David Constantine

It doesn’t hurt, either, that Constantine’s sentences are gorgeous. I actually read this book very slowly because I was taking such pleasure in underlining passages and conversing with the characters via marginalia.

“Your grief is a measure of your love, be glad if you can, rejoice if you can, grieving you love him, in your heart of hearts you would not want it any different.” – David Constantine

Though I’m not actually sure I agree that our grief is a measure of our love, this book made me appreciate how much life goes on after we lose someone who feels like our whole world. This is something I’m able to appreciate a little more these days after the very painful (and very expected) loss of my grandmother in 2011. Though we all knew how ready she was to go, the whole family was rocked by her passing and I continued to feel her loss every time I experienced some new wonderful stage of life I wished I could share with her—getting married, having a son, watching my boy take his first steps. In the month or so since I read this book, I can feel that feeling of loss fading. I still think about her all the time, but Constantine helped me find a place where I can love her and miss her without dissolving into tears. Although I still wish I could share my life’s wonders and struggles with her, I now realize she’s inside me and that I have a pretty good idea what she would have said and how her voice would have sounded when she did, and I can create the conversations I need to have.

In The Life-Writer, Katrin goes through a similar shift. Though her journey is an outward one—writing, traveling, and meeting with anyone who remembers the man her husband was before she knew him, I still had the feeling she was absorbing him into her being. As much as she may have thought she was seeking out a man who might have settled for her and the story of the woman he loved most, she was really reconciling herself to the man she did know so well.

It’s especially beautiful (and sometimes painful) to watch Katrin interact with her husband’s best friend, Daniel. Daniel is the one character who was present in Eric’s life both during the phase of glorious youth and also later when he became the (somewhat) settled professor who married Katrin. There is a tension between Daniel and Katrin that I took at times to be sexual, but the more interesting aspect of their relationship is the shared loss of a man they both knew in their own way. As Katrin seeks out Daniel as the source of the truth about Eric’s love, she engages deeply with who Eric was then but also who Daniel was then. What’s sad is how much she fails to see Daniel as he is now, a fellow in grief. It reminded me of the days following my grandmother’s death when I quibbled with my uncle over her obituary, forgetting entirely that he’d just lost his mother.

Who We Were Then

I don’t think I’m ruining the book by saying that Katrin has at her hands even in the beginning what she truly needs to know. Though she was perfectly suited to be handed the mantle of the quest, she did not seek it out. She knew her husband as he was when he married her and as he was when he died. As she also knew Daniel throughout that time. Though the experiences of their youth shaped these men, I couldn’t help feeling that they were less people when they were young. That isn’t quite right because of course they were people—interesting ones at that, but the living of their lives made them even richer humans with each passing year.

I think of my own husband and of myself when we were young and interesting. I’m lucky to have known him then because I’ve loved seeing the formation of his character over the years, but if I met him tomorrow, he’d already embody those things that formed him. He’d have moved past some, he’d be processing others, but he’d be the gorgeous, sensitive, thoughtful, and brilliant artist, father, and partner I see in front of me every day.

I guess what I’m saying is that we are whole now. I am as was wholly who I was at 38 as I was at 16 or 25. But there’s something about living that makes a 25-year-old look back and see a 16-year-old as less than whole or a 38-year-old looking back at any of them. I try to appreciate who I was and why I made the choices I did, but I am even more me now than ever. Not in an end of the life sort of cornered way, either. I feel fuller and wiser for the experience but I no more want to go back than I want to leap forward and miss the things that will enrich me in the next four decades.

Maybe in the end we know the people we love as well as we know ourselves. At least when it comes to the important bits.

To read the story of The Life-Writer, pick up a copy from Powell’s Books. Your purchase keeps indie booksellers in business and I receive a commission.