Lately I’ve been searching. Digging into books by women about women—trying to find out what it means to be me. Although I have some very dear friends, I’m feeling the absence of a community as we’re too busy to get together or too far apart. Most likely I’m sheltering myself too deeply inside me.

So I’ve taken this quest where I take all of my quests—into the pages of books. The place where it’s safe to learn and stretch and grow. To shine and blossom away from any influence that might divert or derail me. But I’m ready to come out now—my thoughts jelled enough I’m no longer terrified I’ll twist and shape them to please others. At least for now.

Men Explain Things to Me 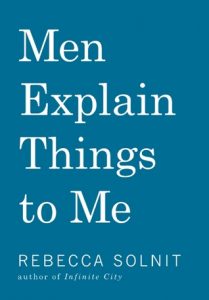 I picked up Men Explain Things to Me by Rebecca Solnit on a night when I was headed to a gathering of female writers (a group that will not be named). During dinner before the event, Ann Hedreen and I discussed what we really thought of this group. I was wrestling with the fact that the event had to be secret. That the organizers felt they had to exclude men. And that they had named their group after a remark by someone they would consider part of the patriarchy. It all felt so reactive.

Ann and I had a really good discussion that night about feminism and what it means to be a woman. It was just the kind of conversation I’d been craving. We wandered into Elliott Bay Books and ran across this book and I thought it would be just the right time to get a new perspective on feminism. The event went well. It actually felt amazing to be surrounded by so many successful women who were so open and generous with each other. I was still sad that it needed to be exclusive, but if that’s what made them be as open as they were, I can understand the place for that.

What I didn’t love was this book. I actually had a fight with my husband about it before I even opened it. I think I was reacting to some sense of being stifled and he was reacting to the combative title. But I put myself in the position of defending something I hadn’t even read. Which I now deeply regret.

What I wanted from Men Explain Things to Me was some insight into the reasons I sometimes feel small or less than. To slights and microaggressions that might be undermining me as I try to build myself up. What I got was a story of how men victimize women. Solnit was saying that not all men intend to put women down, but behind her hand her tone sounded as though they should know better. They should be responsible for our feelings even when we are not responsible for ourselves. I think the book is meant to be playful, but I didn’t feel playful in reading it. I felt less than rather than equal. And not in a way that made me want to improve my lot.

Strike one on finding empowerment in the pages of a book.

When She Named Fire 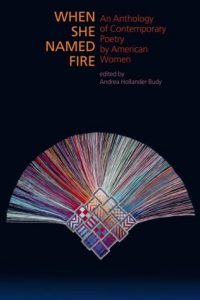 The next book I picked up, When She Named Fire is a collection of poems by women. I have to admit I haven’t gotten very far into the book yet because I was so floored by Kim Addonizio‘s contributions (the book is alphabetical by last name if you want to know how soon I got hung up) that I stopped reading.

In just four poems, Addonizio struck deep into the heart of how the two sexes wound each other and ourselves. She opened up sensuality. And she made me reconsider (deeply) my relationship with my mother. I don’t know how good the rest of the book is, but I’ll be reading this one slowly and for a long time. If even one or two more poems are as good at helping me take ownership of myself and my experience, that sense of empowerment will bleed into my next book, which is a good and necessary thing. 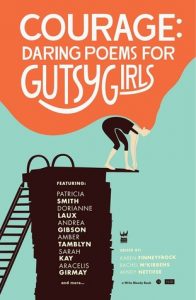 Courage: Daring Poems for Gutsy Girls was co-edited by Karen Finneyfrock, someone I’ll dare to call a friend although we don’t yet know each other that well. Karen and I spent a few days up at the Whiteley Center together with Nicole Hardy and I was so impressed by her centered sense of self and her presence.

Karen works a lot with teens and this collection was created to empower teen girls by showing a wide diversity of experiences. The poems get to the heart of owning yourself and of the myriad ways we can be beautiful and strong and sometimes hurt ourselves. I fell in love all over again with Sarah Kay and Patricia Smith. I read this book fast and will probably read it over again. I’m definitely buying copies for the young women in my life.

What stuck with my most about Courage: Daring Poems for Gutsy Girls, though, is the sense that we write for ourselves. Full of many right answers and a few wrong ones, I’m sure that girls will take comfort in (and power from) this book. They will learn that they are not alone. But they will also not really listen and will instead go off and make their own lessons. And that is how it should be.

What surprised me about this book is how maternal it made me feel. And maybe that’s because my best friend is having her first baby this weekend (so it’s on my mind), but maybe I’m growing up a little, too. But reading and communing with these women over their tenderest moments, I came to realize how small and individual our lives are. I have so many things I want to teach to young women, but maybe the lessons we need to learn cannot be taught. Maybe I could not be taught. Maybe it’s okay that I, like many young girls, longed not to be told how to live but to be loved no matter what choices I made—what successes and failures I created.

Talking to My Body 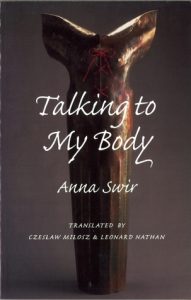 The irony of Talking to My Body is that I found author Anna Swir through a collection anthologized by Czesław Miłosz who at every turn celebrated her feminism but in the most misogynistic tone. I can’t really explain and I think it was well intentioned and also cultural. Regardless, after reading one or two of her poems, I had to have more.

“A night of love with you,
a big baroque battle
and two victories.”
– Anna Swir

One of the things I’ve been struggling with in this post-publication summer (if not my whole life) is that I ache to be known. Deeper than that, I ache to be accepted in all of my faults and failings. I’ve built a wall to shield those tendernesses and I understand that as long as I hold strong this wall, none of that will happen. I’ve learned a lot from Rebecca Bridge about the power of exposing your experience while sitting with yourself (see her essay about her boyfriend’s suicide on Gawker), but I also see how vulnerable being at that edge can make her (and watched others jump over) and I’m not sure I’m brave enough to sit that close to the fire.

Some days I think that the pain of not being known is just slightly less than being rejected for who I am. On those days I do not write. And some days I am strong enough that I want to dig and become no matter what anyone says or thinks or feels. That is when I unlock the door—let the words tumble out into the shape of the real me. Whoever that may be.

What I’m looking for in these books—in all the books I ever read—are the edges I butt up against—the rubs that show me the negative space that is me. With each book I shift and change shape—sometimes a little and sometimes a lot—find my center of gravity and learn to occupy this space.

I don’t know if I’m a feminist. I do know that I am most happy when I’m surrounded by a sea of voices speaking their own truths and when I speak up so that my voice is counted among them.

I have a date, soon, with Roxana Arama where we’re going to talk about writing—where I’ll get real with her about the things I’m struggling with most and I’ll listen as she does the same. And tonight I’ll talk about books and reading and life with a very accomplished group of women. I feel lucky to be counted among all of the women I’ve named in this post and those whom I have not named. As much as I long for a large communal kitchen filled with all the generations of women and all the voices I love, I know, too, that this is my way of engaging, and that maybe, if I’m lucky, my voice will endure to someday help someone else.