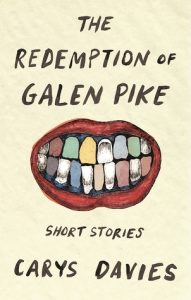 Wicked little books. They’re all I read these days when on a good night I can manage 20 pages and most nights I can’t even remember any of what I read the night before. By wicked little, I mean very short, except in the case of The Redemption of Galen Pike by Carys Davies which is short, but it is also wicked in the most delicious of ways. The stories are compact enough that I could read a few each night if I wanted to, but, more importantly, they are dincredibly well drawn which made them oh-so-memorable. Perfect for a newish mom with a dark sense of humor and an interest in the baser side of human consciousness.

I should have known I’d like this book. I was reading a review copy sent by the publisher, Biblioasis, and Biblioasis seldom does me wrong. I grabbed it off of my ever-expanding to-read shelf just for that reason, and because I needed an antidote to some of the mindless “eating mindfully” books I’d been putting myself to sleep with lately. I was a little trepidatious, though, that the book was a collection of short stories—a form I can’t usually get into because I want to invest more time in the characters. Little did I know that the distilled form would be part of this book’s strength. Let me tell you about two of my favorites…

Davies starts the first story in this collection by masterfully accomplishing something I tried desperately to in my first book and couldn’t.

She didn’t hear him arrive.

The wind was up and the rain was thundering down on the tin roof like a shower of stones and in the midst of all the noise she didn’t hear the rattle of his old buggy approaching. She didn’t hear the scrape of his iron-rimmed wheels on the track, the soft thump of his feet in the wet dust. She didn’t know he was there until she looked up from her bucket of soapy water and saw his face at her window.

With these few sentences, Davies creates a bubble of anticipation for the reader while creating an honest, believable ignorance on the part of the protagonist. We dread the arrival of this man, even as it’s happening. We dread it as much as we soon learn that the main character, Susan, dreads it. But we don’t need to know just yet how much she hates him. We just need to know that he’s creepy and he’s creeping and he’s coming. And Susan doesn’t know.

Davies goes on to describe in equally original and specific detail just how this fellow, Henry, grates on Susan’s nerves each time he comes to visit her husband. It’s soon revealed that said husband is not home on the lonely homestead just now and that Susan is alone with Henry. The power of this story is that even more than a month after I first read it, my skin is prickling with anticipation as I summarize these initial pieces for you.

I will not reveal what happens in this story. It’s too good. But I will say that Davies has complete control of her writing and of the reader as she piques our dread while unfolding a story that is very unlike what we fear might happen. I was terrified in reading it and no less terrified at the end, but the surprises she unwound for me made me question all of the assumptions I’d made and realize how very many levels a truly gifted writer is writing on all at once.

“The Taking of Bunny Clay”

Once you realize that Bunny Clay is a baby, the title of this story alone becomes any parent’s worst nightmare. But Davies is too subtle a writer to give us a straight up baby snatching story that plays to our every fear. Instead, she again creates an unexpected story that plumbs the real depths of our emotions. We quickly see how much working mother Nancy comes to depend on and appreciate her nanny, Cheryl. How Nancy subsumes the feelings she has about how her son should be raised because it’s more important that he’s well cared for. Until Cheryl makes an unusual ask…

The story gets fascinating when the point of view flips and we learn about Cheryl as a human rather than as an employee. I can’t say more except that love comes in many forms. The story is not anything you think and it broke my heart in a million pieces I never expected—even from the title. It’s a hard read for a mom, but a good one. One of the few things I’ve read or watched since parenthood that hasn’t simply yanked the “fear for baby” chain but instead led me to explore and inhabit that fear long enough to understand the good fortune that incites it.

There were stories I enjoyed less. Whether I was especially tired or the story was especially oblique, the only memory I have of “On Commercial Hill” is of scrawling “huh?” at the end of the final paragraph. And sometimes the loathsome characters are truly hard to take, especially when the current political climate makes me want to retract all empathy from a few real life characters.

But then in “Jubilee” Davies captures pure loneliness, or in “The Coat” she describes winter “like a big, dark shoulder, or the long curve of a road up ahead, and once you are round it, it is all downhill”, and I realize how much poorer I would have been as a writer and a human if I had never read this book. I may wait for a brighter day to re-read The Redemption of Galen Pike, but I will re-read it. I have to. There’s so much more to discover.

To explore your own darkness pick up a copy of The Redemption of Galen Pike from Powell’s Books. Your purchase keeps indie booksellers in business and I receive a commission.