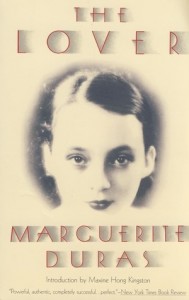 Marguerite Duras throws the reader into the memory of her narrator in The Lover. By switching narration between the first person and third person limited, Duras embodies the experiences of a fifteen and a half year-old girl who takes on a Chinese lover in Saigon. She also conveys the sense of the girl as object which allows the reader to both sympathize with the character and subject her to judgment. This mimics the way the narrator is simultaneously reminiscing about a specific period in her adolescence and also judging herself.

Because the narrative voice doesn’t change when the narrative point of view does, the reader has the sense that the same first person narrator is relating the story from two angles. In one section the narrator describes her shoes: “These high heels are the first in my life, they’re beautiful, they’ve eclipsed all the shoes that went before.” This is followed by a section break and then the very next sentence is: “It’s not the shoes, though, that make the girl look so strangely, so weirdly dressed.” Three sentences later in the same section the narrator is back to first person in describing the provenance of the hat she was wearing: “How I came by it I’ve forgotten.” In each of these sections, the narrator is talking about the same girl and her possessions but the reader is encountering her as both separate and part of the narrator.

Switching back and forth between narrative points of view could be maddening for a reader, but the switch is seamless and gives the reader a much fuller picture of the narrator’s recollections than one viewpoint or the other could have done. The ease of transition is accomplished by zooming in to look at one object (here the shoes and the hat) and then zooming back out to show the same object from a different vantage point.

The key to the reasons behind the shift in perspective is in the following passage: “He answers my mother, tells her she’s right to beat the girl…The mother hits her as hard as she can.” I was struck by the poignant disassociation in the shift here as the narrator transitions from “my mother” to “the girl.”  Moments before, the narrator used the first person to describe the beginning of the incident: “My mother has attacks during which she falls on me…punches me.” “Has attacks” is habitual, not of the moment, and not in scene. But as the description progresses, the specificity of the action as the other brother flees and the mother calms down and the girl lies about her relationship with the Chinese man, makes the description seem like one particular instance. The narrator is separating herself from the girl who is the center of this action. She sets herself apart from the chaos and pain of these relationships as though it happened to someone else. This disembodiment is characteristic of someone who has undergone trauma and is particularly poignant because the character is at an age where one internalizes this type of experience and blames oneself for it.

Shifting back and forth between these narrative points of view is tricky, but Duras managed it well. As a reader, I was able to engage with the character on a deeper level and could feel the shift into third person almost as the narrator’s wince. I don’t think this could be prudently imitated except in the rarest of circumstances because it creates a very specific effect. However, it is important to keep in mind that our characters, being the astute little observers that they tend to be, are likely aware of how they are perceived. There are other ways to view even a first person narrator from the outside, e.g. conveying anxiety at how they are being perceived. In my novel, Polska, 1994, being seen and the perceptions of others is an important part of Magda’s world and I work to show this through how she thinks others are seeing her. Duras reminded me that it is important to consider how my character views herself.

If this review made you want to read the book, pick up a copy of The Lover from Powell’s Books. Your purchase keeps indie booksellers in business and I receive a commission.