If you’ve read more than a few of my reviews, you’ll notice that I usually only take the time to review books I like. That’s because I prefer to delve into the positive aspects of a work but also because my time is valuable and I often don’t finish books I’m not enjoying. At the beginning of this month I went back to work after maternity leave and time is now more precious than ever—evidenced by the fact that I tossed aside book after book in my first week back. This is the story of the books I didn’t finish and why. 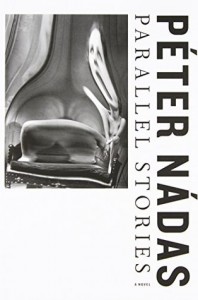 This was actually the second time I tried to read this book. I took it on a week-long beach getaway for my husband’s and my first anniversary. Then it sat on my bedside table for a couple of years and I managed to read 100 pages before tucking it away. So when I knew I’d be home for a prolonged maternity leave, I dug it out again. I knew from reading Love and A Book of Memories that his work is often gorgeously slow but worth the effort.

Parallel Stories started out strong. A body is found on a bench and the first scene is a delicate and thoughtful interplay between an investigator and the man who either found the body or murdered the man. Nadas reveals so much of the men’s psychology as the scene unfolds and we come to learn that the investigator does suspect the man but that he actually doesn’t care. It’s very soon after the Berlin Wall came down and there is so much more going on in all of their lives. The scene is surprising and riveting.

If only the rest of the book was that way. Instead, Nadas starts following the story of a family in Hungary. We only really ever see two characters at a time in conversation and I came to understand that the juxtaposition of odd bits of these characters’ natures was the source of the title. I also stumbled on the most extensive and dull scenes of masturbation I’ve ever read. I kept trying to push farther into the book to see if we could get back to the mystery or if there was anyone I could care about in the book, but, well… eventually my poor brain was as chafed as the character’s genitals and I had to stop reading. At least I got over 200 pages into this 1100+ page tome. 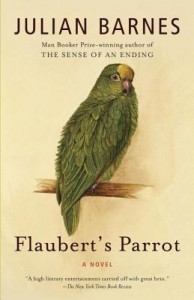 I picked this book up at the local Little Free Library because I’ve enjoyed many of Julian Barnes’s novels. I thought it would be a quiet, meditative, well-written novel that would reach into my subconscious and teach me things about writing. I did not think it would be about Flaubert’s parrot. Literally. Well, actually, two parrots (because only one could have really been Flaubert’s), stuffed.

The book is filled with all kinds of biographical details about Flaubert’s life, which is great if you’re a Flaubert scholar or subscribe to the school of thought that the life of the writer is equally interesting to the work. I don’t. I did read the collected correspondence of Gustave Flaubert and George Sand because I adore the art of correspondence, and after that I knew more than enough about their lives.

It’s possible that this book contains a mystery or a brilliant narrative or some brilliant writing. I’ll never know because 60 pages were plenty to turn me off.

The Loser by George Konrad

Konrad is one of those obscure Eastern European writers I read in grad school. And loved. I read The Case Worker, a squirrely novel about a case worker in Communist Hungary. That one was hard to read but worth the effort. The Loser was just weird.

The book starts out in an outlandish nightmare then transitions to a mental asylum and then the countryside of Communist Hungary and then the asylum again. I think. The type was so small and the writing so dense that I only ever got between two and five pages read per night. So where I could have been immersed in a gorgeous metaphor that revealed what life really felt like in Communist Hungary, instead I felt like I was in a nightmare. Kind of like the time we watched a Japanese horror film in a drafty theater at midnight. This early bird kept falling asleep and waking again as the characters descended into a neon-lit Buddhist hell. I was freezing nd had no idea what was happening. All I wanted—during the movie and in this book—was to GET OUT. I think I completed a whole 40 pages.

Did I give these books their fair shake? Probably not. Am I too tired in these first couple of weeks as a working mother to really engage with literature? Maybe. Do I sound a little cranky? Yes. Sorry about that. I love books. I sincerely believe there are great books that will just never quite hit me right. These might be among them. But I’ll never know. If you want to find out for yourself whether I’ve just maligned some of the best books in the universe, check out the Little Free Library on 12th Ave NE and around 90th in Seattle later today 🙂

Thanks for bearing with me as I figure out this whole mom/worker/writer thing. I’m going to try to find something I enjoy and get a new review out to you soon. Just as soon as the kiddo and I finish another round of Dr. Seuss’s Mr. Brown Can Moo Can You? which he ADORES. And if he had his way, he’d grab this laptop right out of my hands and type up a review right quick. Or put it in his mouth. Judging by the way he “consumes” his favorite books, I’m not going to find out.