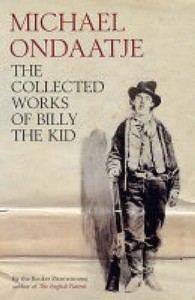 Reading The Collected Works of Billy the Kid, I was struck by Michael Ondaatje’s inclusion of photographs with the text. The text itself was an interesting patchwork of poetry and prose and I can see that Ondaatje was using visual matter as another layer of that patchwork.

In works of nonfiction, I’m used to seeing batches of photographs grouped in one section or two (likely for ease of collation of the glossy pages) with captions and arranged in more or less chronological order. In fiction, I am unused to pictures at all.

I was distracted but intrigued while reading Ondaatje by having the pictures strewn throughout the text without captions. The placement of the images seemed to be related to the text rather than in chronological or any other order.

I found myself wondering if the pictures were actual representations of the real people and the real places. For example, on page 91 there is a picture of a bed with a gun leaning against it. It looks like a period photograph and on the previous page is a description from the point of view of Pat Garrett in a room with a straw mattress. On the page following the picture Ondaatje writes, “This is a diagram then of Maxwell’s” which combined with the photo of the bedroom put me in a visual place and made me want to believe the picture was actually of that room where Garrett shot at Billy.

I got hung up in some of the details and started thinking that the blanket looked authentic and if the picture had been faked then they had done it well. So in some ways the incorporation of visual matter into the text enhanced my experience and in some ways it distracted from it.

Using Images in My Book

In my novel, Polska, 1994, I considered incorporating some memorabilia as souvenirs in the most French sense, but I was concerned it would become too scrapbook‑y. I also worried about the mixing authentic mementos with a fictional narrative. 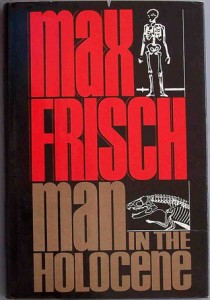 It is important that extraneous material incorporated into a text become an organic and necessary part of the whole. Man in the Holocene by Max Frisch uses scraps of encyclopedia entries as part of the narrative. These scraps are seamlessly integrated into the narrative because Geiser is clipping things that matter to him from his books and pasting them to his walls as he is slowly losing his memory. For example, one of the scraps is a definition, “Weakness of memory is the deterioration of the faculty of recalling earlier experiences.”

It isn’t until much later in the book that Frisch has Geiser recognize that he is in fact losing his memory. The visual pieces serve to tell part of the story. It was easier for me to enter the fictional dream because the visual elements are mostly text and Geiser was a fully fictional character.

When I studied visual arts, it was always stressed to me that the piece should speak for itself. I was discouraged from including words in painting or sculpture. I am carrying that baggage but I am also starting to see that like most hard and fast rules, it is merely cautionary. Anything done well is worth doing.

Are pictures the new adverbs—verboten because they are seen as easy shorthand? Or are Ondaatje and Frisch telling me to loosen up and work with whatever material tells the best story?

If this review made you want to read the book, pick up a copy of The Collected Works of Billy the Kid from Powell’s Books. Your purchase keeps indie booksellers in business and I receive a commission.