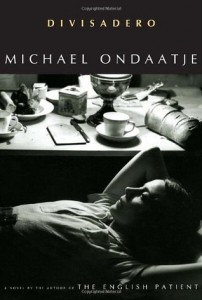 In Divisadero, Michael Ondaatje uses an odd narrative point of view. Though Ondaatje shifts between passages in the first person points of view of Anna and of Lucien Segura and also third person omniscience, the novel can be read as a compilation of Anna’s reminiscences, extrapolations, and imagination.

The first chapter begins in the first person point of view of Anna as she reflects on growing up with her sister Claire and Cooper, a boy they were raised with. There are glimpses of omniscience in Anna’s voice: “[t]here is a broken path in both our memories toward this incident, even now.” What verges on omniscience here is that Anna is speaking for herself and for Claire as though they are still in touch, but so far as the narrative is concerned, Anna and Claire haven’t seen each other since they were sixteen and may never again.

Throughout the book, identity is confused, adopted, and changed and this mirrors the shifting quality of the point of view. When Cooper rescued Anna from the barn, he “called [Anna] ‘Claire.’ So that Claire herself became confused, uncertain for a moment as to who she was.” Anna refers to herself as “this person formerly known as Anna” and Cooper confuses Anna for Claire and later Claire for Anna. This quality of never quite knowing who is narrating made me want to understand how the different narrators fit together.

To add to the strange quality of the point of view, there is one section narrated in first person plural. In this scene, we are looking at pictures of people who have lived in or near Lucien Segura’s house and Ondaatje writes about the second of two photographs “[w]e are much closer to the subject in this picture. Photography has moved in from the middle distance as the century progressed.” Anna is referred to in the third person, as “[t]he woman” and “[t]his person who is barely Anna,” so it feels as though Anna is not the narrator, but Ondaatje is also giving a clue here. This section in with its odd point of view and passages about shifting distance was my key to unlocking the point of view. I started to understand what I had sensed earlier, that Ondaatje had created a world where the reader is seeing things from both inside and outside of Anna, but the narrator is always Anna.

It is easy to understand how Anna could have constructed a first person narrative for Lucien Segura. She is living in his home and she is studying him and his papers. It feels somehow natural for her to fall into his voice and Ondaatje reinforces this scholar-subject interaction in the last section of the novel, Say Your Goodbyes. Here the reader is gently lifted step by step out of Segura’s world by the third person narrator as Segura’s actions are less and less dramatized and more and more reported on as the narrator, who I have assumed is Anna, begins to analyze Segura’s life and his works and his life is wrapped neatly up. The book ends with Anna narrating in the first person.

Entire portions of the novel are told in a third person point of view that Anna could not have the information to relate. She so much as says: “I would never see Coop again.” If Anna is the narrator, only a few things could account for her omniscience about Claire and Cooper. Anna could have gained her power through some supernatural means, or, more likely, Anna has invented narratives for Claire and Cooper using her intimate knowledge of them from before just as she constructed a narrative for Lucien Segura based on his papers and her encounters with Rafael.

In the section titled The Person Formerly Known as Anna, the first-person Anna alludes to her inhabiting of Claire: “[i]n my work I sometimes borrow Claire’s nature as well as her careful focus on the world” and “I feel I can imagine most things about Claire accurately. I know her.” She goes on to say “[b]ut Coop I know only in one distinct way–as the twenty-year-old I fell in love with,” and it is true, Cooper’s narrative of becoming a lonely cardsharp and then being tempted into danger by a woman could easily be extrapolated from the loner lifestyle he led within Anna’s family and the risks he took to be with her. Claire’s rescue of Cooper and the love that develops between them as he calls her Anna seems like something Anna could have invented to assuage her guilt over leaving these two people she loved deeply behind while at the same time ultimately triumphing over Claire because Cooper is still in love with Anna, not Claire. It is as though Anna brought Cooper and Claire together in a mocking atonement for the moment in the barn where Cooper rescued Anna instead of Claire.

The point of view in this book was difficult for me to get a handle on. I sensed that Anna was narrating, but when portions of her life were recounted in the third person, I kept flipping back to see if I had misread the first section. I’m not sure yet that I completely understand whether there was something I missed in the mixing of Claire and Anna. Ondaatje managed to convey Anna’s disembodiment through his complicated construction of point of view and I’m not sure it could have been captured as well in any other way. I enjoyed mulling over the book and reading passages over and over, but at times I was also frustrated by not being to accurately place all of the pieces on my chess board. I couldn’t tell whether the narrator was reliable, because I didn’t know who it was and I kept looking for someone other than Anna to turn up as the third person narrator. That said, I like some aspects of the complexity of the narration.

In my own work, I am still grappling with point of view. At one time I wanted to construct Polska, 1994 from a series of narrators who were all observing Magda so that she would be drawn entirely from the observations of others until the rape when she decides to embody herself. In the long run, I found that I wanted to inhabit her more than that, but I still ache to create a richer world than I can totally create through the eyes of a girl of seventeen.

If this review made you want to read the book, pick up a copy of Divisadero from Powell’s Books. Your purchase keeps indie booksellers in business and I receive a commission.