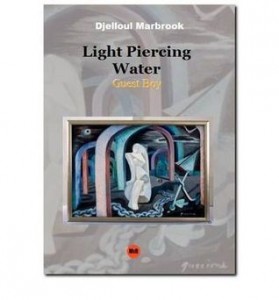 I’ve been writing a lot about the unmoored experience of being a third culture kid lately and Guest Boy by Djelloul Marbrook captures the darker side of that experience with the story of Bo Cavalieri, a sailor adrift in the world.

Born of a German mother and an Arabic father he never knew, Bo isn’t even his name. “Bo” is short for “Bosun” which identifies his role aboard a ship, and the fact that Bo is more comfortable being identified by his title than his name says so much about the depth of his identity crisis. At times, the narrative slips into calling him by his birth name, Amir, and I wondered if in the subsequent books he will begin inhabiting that self. I very much enjoyed following Bo on his quest and how well Marbrook laid out the paths available to him: denial, discovery, integration, and erasure. It’s a struggle I could identify with and one I learned from.

“A people, in order to be proud of their past, they must be acquainted with it.” – Djelloul Marbrook

Like many of my favorite books, this story defies the arbitrary geographical boundaries I’ve placed on this blog. The narrative traveled from Oman to Somalia and Edinburgh to Algeria and New York. It took me through unfamiliar histories of Arab, Portuguese, and Greek sailors. At times I wanted the book to be full of hyperlinks so I could dig deeper into those histories–to learn more about the kamal, the ancient pearl trade in the Persian Gulf, and the Antikythera computer–but I was glad, too, to stay on the page and inside Bo’s world.

“Each cargo carries with it a disposition towards a particular misfortune.” – Djelloul Marbrook

Bo is never at home anywhere and he holds himself closely as he wanders between groups of people as much as he does places on the map. From the Sultan of Oman to Moira Sayre a woman on one of the many ships he crews (who I’m certain was named in honor of Zelda Sayre Fitzgerald), small parts of Bo are revealed as he drifts and draws, drifts and draws. Even when he meets Rose MacQuarrie, the only woman besides his mother who could tell him about the true nature of his father, Bo holds himself closely and instead we learn most about Bo’s mother and father, a Danish count, and Rose herself.

The Language of a Poet and a Seaman

“I stopped and unbuttoned my skirt and swept it off to the side. I had no undies, so I just presented my familiar long-stemmed rusty rose to Count Von Melen in his garden.” – Djelloul Marbrook

Marbrook is also poet which is evident in his fresh imagery, the way he chooses words, and the structure of his sentences. The book is not overly flowery, but there are times that I could feel him crafting the sentence so that I’d have to slow down and pay attention, like when he buries the verb inside a conjunction, “I didn’t need money. I’d not only my father’s…” There’s a softness to this syntax that I loved, even as it made me go back to read and reread the sentence over and over to get the sense of it.

There’s also a looseness to the writing that I wouldn’t believe if it was written by someone else, but Marbrook is so in control of his subject that as he waxes metaphoric about the relationship between chemistry and alchemy, I’m willing to suspend my usual disbelief. And I was willing to trust him implicitly as he described all the parts of a ship and of sailing in what must be a pitch-perfect sailor’s vernacular.

There is not much tension in the novel, but it’s fascinating nonetheless and I was always torn between devouring the book and taking careful notes.

The Role of the Author

“The Sufis say when the student is ready the teacher appears. What blinds us is what we want.” – Djelloul Marbrook

I did wonder at times how closely this story mirrored Marbrook’s own story. He also has an Arabic first name and a European last and his understanding of the subjects at hand was so complete. I’m sure like many authors his fiction does draw in some ways from life, but I found I enjoyed the book most when I allowed myself to let go of my curiosity about the author. It’s something that’s difficult to do in an era where personality seems to triumph and we talk more about Jonathan Franzen’s denigration of Twitter than we do his books, but letting the work speak for itself appeals more to my sensibilities.

It’s the same reason I struggle at times in these reviews. Sharing books comes so naturally. Sharing my struggles with identity and depression does not. But it is in books like this that I seek answers and guidance and I travel my own path to enlightenment and contentment. This book opened a struggle in me but it’s one I cannot yet name. I hope you will accept this review and this writer our their draft states because I wanted to share this book with you before even I fully understood it just as I want to share myself with you even as I learn to understand myself.

This is only the first of three Light Piercing Water books and I’m torn about reading the rest. On one hand, I deeply enjoyed getting to know Bo and learning from his life and his struggles. On another, this story felt complete and I kind of want to float inside of it for awhile before going on to further adventures. I can only hope that the next two installments are as thoughtfully written and meditative as this one is.