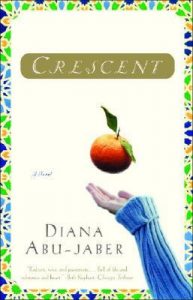 I avoided reading Crescent by Diana Abu-Jaber for almost a year. It looked too thick for my purse or the back matter was too fluffy for my mood. When I finally picked up the book, I realized what I’d been missing all this time. And although I lost myself in the story of Sirine and Han so much that I barely annotated the book, it was impossible to ignore how well-crafted this novel is.

The Observer Between Worlds

Abu-Jaber sets up the perfect observer of cultures in Sirine, a half-Iraqi, half-American chef living in California with her Iraq-born uncle. Sirine barely knew her parents when they died and although she used to cook “American” food, she feels herself drawn back into Iraqi side of her heritage. It’s the perfect setup for a reader to explore it with her. Sirine has the natural curiosity because of the allure of tracing one’s ancestry, and even if you were never interested in Arab culture in general, her interest is contagious.

And then Abu-Jaber puts Sirine in the perfect place to observe culture–cooking at an Arab cafe near a university. Some of the characters Sirine sees on a daily basis are people she might have interacted with through her uncle who is also a professor at the university, but putting Sirine in front of them on her own terms makes her form her own relationships with characters like professor Aziz, American Nathan who photographed Iraq years ago, and the brilliant Han who will so haunt Sirine that a love match is inevitable.

Although many of the predominant characters in this book are male (besides Sirine), there’s also a wonderful world of rich female characters like Um-Nadia and Rana. They may be less pushy about getting themselves included in the narrative, but the lessons they impart are equally important.

Sirine’s attraction to Han is so strong that it seems inevitable they will get together. And when they do, it is not at all disappointing. But I was so invested in their relationship that as it went on and started to grow (Abu-Jaber does amazing things with anticipation), I remembered that happy relationships don’t make for good fiction. I knew the writing was too good to just dissolve into happy fun times, but I also really wanted Sirine and Han to ride off into the sunset. I won’t spoil what happens. I will say that their relationship is handled very well and nothing in it feels at all arbitrary. I kind of want to go read it again now…

Remember the old adage, “Those who don’t remember the past are doomed to repeat it”? The best novels put that to use by laying out hints of the moral or the pattern that the character will repeat over and over until he or she learns what is necessary to escape that ring of hell and advance. Throw in a little of Chekhov’s gun (everything in the story must be necessary to the telling of it) and you have a gripping story where the reader has all the tools to get deeply rooted in the protagonist’s struggles. All of this makes for damned compelling fiction that’s hard to put down.

Abu-Jaber does a beautiful job setting these stakes for Sirine and laying out the necessary elements of telling the story. I won’t tell you here what main struggles I think Sirine is trying to overcome (for me there were two, maybe three) because part of the joy of a good book is finding the ones you personally identify with–it makes your bond with the character stronger. But I will say that Abu-Jaber doesn’t waste one element in her storytelling and I really appreciated that.

One of the reasons I think my first book was a novella is that I knew I had to be in control of all those elements and I didn’t have the tools yet to do that on a large scale. I only hope I can someday write something that merits 400 pages like Abu-Jaber has done with Crescent.

“There’s time for baklava if they make it together.

She hunts in the big drawer for another apron, shows him where to stand, how to pick up the sheet of filo dough from its edge, the careful, precise unpeeling, the quick movement from the folded sheets to the tray, and finally, the positioning on top of the tray. He watches everything closely, asks no questions, and then aligns the next pastry sheet perfectly. She paints the dough with clarified butter. And while Sirine has never known how to dance, always stiffening and trying to lead while her partner murmurs relax, relax–and while there are very few people who know how to cook and move with her in the kitchen–it seems that she and Han know how to make baklava together.” – Diana Abu-Jaber, Crescent

Food is sustenance and as such it’s often ignored in books. That’s fine. But I’m finding that there’s this genre of books that helps us understand foreign cultures through their foods (Like Water for Chocolate is an early example). Maybe because eating is so universal that it’s something we can all relate to–it makes a good entry point into a new culture. I know when I was writing Polska, 1994 that food was a very important part of the book for me because I remembered how important the act of making and the act of eating were. Maybe it’s the very fact that as an American in a city I can have anything I want any time I want it (even when surrounded by 700,000 people chanting fans) that makes me crave this elemental look at nourishment. Oh, and some of the scenes where Sirine and Han cook together are pretty hot.

I don’t feel like I know a lot more facts about Iraqi culture than I did before I read Crescent but I do understand more of the nuance and the book made me hungry (on many levels) to explore more. It’s a beautiful book and an easy read. I wish I hadn’t let it sit on the shelf as long as I did.

If this review made you hungry to read Diana Abu-Jaber, pick up a copy of Crescent from Powell’s Books. Your purchase keeps indie booksellers in business and I receive a commission.