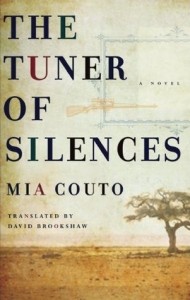 I wrote recently about a book so rich with description I didn’t know where to focus. How perfect it was, then, to open The Tuner of Silences by Mia Couto–a book so cleanly written, so tightly edited that every word matters. With this extraordinary concision, Couto leaves room for the reader and I became deeply invested in the story of Mwanito and Ntunzi and their father.

What’s most surprising to me about this book is how it can be so spare and yet so rich. If I said Couto’s language was like poetry, you might misunderstand me and think it is difficult to understand. Instead the language in this book is like looking into a crystal clear lake and being able to see every detail of the fish, vegetation, and geology while at the same time seeing your reflection and that of the sky and the trees behind you. Like the best poetry, Couto has placed on the page the framework of an extraordinary story but it’s in your mind that the full magic of the world comes to life.

Some of my impressions of the book are fragmentary because I’m still mulling it over. Although my writing won’t create the same magic Couto’s does, perhaps these fragments will inspire something in you.

“I was eleven years old when I saw a woman for the first time, and I was seized by such sudden surprise that I burst into tears” – Mia Couto

From that enticing and strange first sentence, I was hooked on this book. It doesn’t take long to understand that the speaker of that line, Mwanito, has been hustled by his father out to an abandoned game preserve where they have lived with Mwanito’s brother Ntunzi, a soldier named Zachary, and a donkey for eight years–ever since “the world had come to an end and we were the only survivors.” The only contact this odd group has with the outside world is Mwanito’s uncle, Aproximado.

This is not a dystopian novel. Instead it is the story of a man who could not deal with the real world and so he ran away with his children. It is the story of a son who from the age of three was assigned the vocation “to take care of this incurable absence” left by the death of his mother. And it is the story of the other people around them who are trying to cope with the world Mwanito’s father created.

Here Boys Come to Be Made Men

In the past couple of weeks, I’ve found myself reading a lot of coming of age novels about boys. From A Separate Peace to Out Stealing Horses to The Tuner of Silences and The Storyteller, there’s a definite trend. Perhaps the big milestones and emotional growth spurts happening around me, not the least of which is my baby brother’s wedding this coming weekend, are calling me to better understand the men in my life.

“Some people have children in order to get closer to God. He had become God when he became my father.” – Mia Couto

Of all these books, the boys in The Tuner of Silences become men in the least desirable circumstances. Although their father is present physically, Mwanito and Ntunzi have the doubly difficult job of finding their own realities inside (or outside) their father’s delusion. It’s a sad circumstance, but an all-too-common one. Part of the magic of how Couto engaged me with this book was setting me up to think about what these boys would miss along the way to manhood and who they would become. I thought a lot about my childhood and those of the people around me. I thought about the kind of parent I would want to be.

It’s obvious from the first sentence of this book that the outside world will intrude. But I kind of wish it hadn’t. As much as I wanted the boys to escape their father and find control over their own lives, I didn’t love the way it went down. I won’t go into details, but it does involve a woman and the story changes significantly from there.

“Every silence contains music in a state of gestation.” – Mia Couto

Every sentence in this book sings and I found myself wanting to underline section after section. I also started to wonder about aphorisms in this age where so many of us are seeking wisdom and guidance. The first aphorist who comes to mind, one I see quoted frequently, is Paolo Coelho. But although Coelho’s lines often seem deep at first glance, sentiments like “Stop being who you were and become who you are” quickly start to feel pat and hollow.

Meanwhile, there’s a world of thought contained in Couto’s subtext. One of the pleasures of this book was returning to some of his lines to mull over their full implications. I guess when I look for guidance it will be from someone who teaches me how to think rather than telling me the answers he or she has found.

I loved this book and I will read it again. I have a feeling because so much of the experience of this book is the merging of the text and what I bring to the text that it will never be the same book twice. I will be very interested to see what Couto inspires me to think about next time around.

If you want to make up your own mind about this book, pick up a copy of The Tuner of Silences from Powell’s Books. Your purchase keeps indie booksellers in business and I receive a commission.