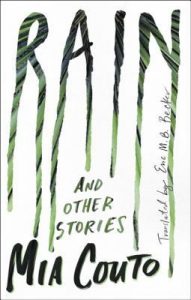 After reading more of Bolaño’s 2666 than I ever should have, I cleaned my bookshelves of all the to-read have-tos that I’ve held on to for far too long. And found myself without anything to read. Failure to read good books generally puts me in a state of existential crisis, so I decided to return to an old favorite—Portuguese author António Lobo Antunes. Even after leafing through a few chapters in random order, I could feel myself restored. And I wanted more, so I turned to my shelf of books to review and found Mia Couto, a writer from Mozambique who also writes in Portuguese. I’ve spent a few wonderful days now with Rain and Other Stories and want to share with you the experience of reading this man’s work with Lobo Antunes in the background.

I’ve read many books by Lobo Antunes, a physician who fought in the Angolan war. His language is as lyrical as his thought and the books I’ve enjoyed most shift almost imperceptibly back and forth between African memories and European presents. On this read, I found myself immersed in sentences like “Lisbon, even at this hour, is a city as devoid of mystery as a nudist beach” and “I’m traveling the gentle geography of your body, the river of your voice, the cool shade of your hands, the pigeon-breast down of your pubis, but me and Xana and you, the Saturday rain, we are the only ones who truly exist…” Swoon. With a translation it’s always hard to tell whether to credit the author or translator (here, Margaret Jull Costa) but I suspect both contributed heavily to the magic of the flow of this book.

In Lobo Antunes, Africa is half of one whole. It’s either the immediate present of a man immersed in a memory of war or the tortured background against which the luscious European present unfolds. For Couto, though, Africa is everything—the tortured past and the luscious present, the luscious past and the tortured present. Rain and Other Stories was written after Mozambique’s war, and Couto writes in the introduction, “After the war, I thought all that was left was ashes, hollow ruins… Today I know that’s not true. Where man remains, a seed, too, survives, a dream to inseminate time.” Forgiving the decidedly visual metaphor, this is very much a book for our time, a time when we need to see the future beyond the [INSERT HYBERBOLIC ADJECTIVE HERE] headlines. Couto finds magic in those after-war ashes (literally and figuratively) and so shall we.

The Richness of Africa

Most of the books I’ve loved about Africa have been the books of the colonizers… partly because those were the books I was exposed to and partly because they reinforced the ideas of Africa that I grew up with during the “Feed the World” generation. Couto, too, is white. Born in Mozambique to Portuguese immigrants, he could be writing colonial books as well. And maybe the magic and use of folk images that I’m responding too is appropriated, but Rain and Other Stories feels written with the honest respect of someone who loves a country and a culture. Because Couto is Africa born and he lived through the war there, his experience, too is authentic and I wish I could have read this book without thinking so hard about race—because it’s good. I should (and will) read other narratives of different life experiences in Mozambique, but for now let me tell you about this gifted storyteller.

In “The Waters of Time,” the first story in this collection, a child rows down the river with his grandfather. It’s a simple set-up that quickly opens into another world as the narrator describes the lake they would row to:

“This was the realm of forbidden creatures. All that showed itself there, after all, invented its existence… Everything around us bathed in cool breezes, shadows made of light itself, as if the morning were eternally drowned in dreams.” – Mia Couto, Waters of Time

This fantastical world where they go to watch white cloths dance in the distance contrasts sharply with the quotidian rituals home. Through his use of tense, Couto manages to make both realms feel habitual and yet his images are rich enough to make both alive. I won’t tell you how the story unfurls because the pleasure of experiencing it for the first time was simply too great. But I want to… Suffice it to say that the river and water are recurring themes in this book in a way that feels very of the place and also ancient and of all of us.

“Water and time are twin brothers, born of the same womb. I had just discovered in myself a river that would never die. It’s to that river I now return, guiding my son…” – Mia Couto, Waters of Time

Like Portuguese writer Paulo Coelho, Couto makes liberal use of aphorisms, but unlike Coelho’s aphorisms (which can seem canned and cheap), Couto’s sound deeply across time and experience:

These aphorisms were rich enough that I wondered if Couto was borrowing from Mozambican folklore, but while that may be true (I know woefully little about Mozambique), the way he (and translator Eric M.B. Becker) work around language to bring it to life, I wouldn’t be at all surprised if the aphorisms were original. A few favorite examples are:

Honestly I’ve struggled while writing this review, because every time I open the book to find more examples of things I want to share with you, I get so sucked back into the writing that I simply want to read it all over again. That is to say that I’m so enjoying being lost in Couto’s craft that I don’t really want to deconstruct it. Stories I keep returning to are: “Blind Estrelinho”, “The Delivery”, “The Flag in the Sunset”, “Beyond the River Bend” and “High-Heel Shoes”. Each story captures in its own way a very different life, a different experience and yet Couto manages in every single one to seduce me with language and then upend my expectations. The surprise is so much a part of the enjoyment that I don’t want to spoil these stories for you. I want you to read them for yourself. Immediately. (That means you, Dad… I’ll send you a copy.)

There’s one more story in Rain and Other Stories I can’t not tell you about. This part does contain spoilers. “The Perfume” is the story of Gloria, a woman “accustomed to living low” whose husband comes home with a present and announces they’re going dancing. In the first paragraph, Couto fully unravels the accumulated staleness of their marriage which contrasts beautifully with Justino’s gift to make us as surprised as Gloria. We’re with her as she warily dresses in the given dress and eventually throws a bottle of perfume Justino gave her when they were courting but that she’s never had occasion to wear out the window where it breaks on the sidewalk.

The strangeness between the pair continues as they leave the house and travel to the dance where habitually jealous Justino encourages her to dance with other men and then leaves her. It’s a confusing and somewhat devastating story as we’re locked inside what Gloria must be feeling at this humiliation, this parting. Except Gloria is a richer character than that. She arrives home, alone, to find her husband certainly gone, and in the morning she wakes in her bed to the smell of that perfume wafting though the window. She steps outside and cuts herself on the bottle and this is how the story concludes:

“To this day, one can find the indelible tracks on the living-room floor from when Gloria shed the first drops of her bloody glee.” – Mia Couto, The Perfume

I have noticed that both of these authors are male and I’m trying to read more broadly than I have in the past. Thankfully someone (@DeepVellum) approached me on Twitter and recommended Maria Gabriela Llansol and Noemi Jaffe. I’ve read neither yet, but they’re on my Goodreads list. And I’ll continue to seek out Mozambican and Angolan authors with different sets of life experiences. If you have recommendations, please leave them in the comments.

To immerse yourself in some of the magic of these books, pick up a copy of Rain and Other Stories or Land at the End of the Worldfrom Powell’s Books. Your purchase keeps indie booksellers in business and I receive a commission.