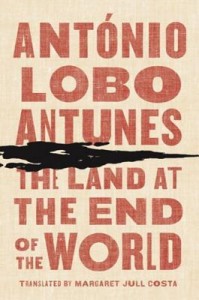 There are a very few writers I turn to when I really need something that is guaranteed to blow my writing mind. On one end I turn to Italo Calvino for the prismatic layers beneath his concise language and on the opposite end is the lusciously messy work of Antonio Lobo Antunes, and neither has disappointed me yet. I often hold back from reading these authors, admiring them for months before ever opening them. I’m always slightly worried that this will be the book that lets me down. The Land at the End of the World by Antonio Lobo Antunes rocked my world.

The Experience of Being a Soldier

“Listen. Look at me and listen, I so need you to listen, to listen with the same anxious attention with which we used to listen to the calls on the radio from the company under fire.” – Antunes

I’ve never been to war, but Antunes has. He was a Portuguese medic during the war in Angola, and through his writing, I got a different sense of how war affects a soldier than I had from soldiers turned writers like Tim O’Brien and Joe Haldeman. Both O’Brien and Haldeman convey the arbitrariness and unending quality of war along with a kind of stony acceptance as they write about being inside a war.

By setting this book (which draws on his own experiences) after the war, Antunes shows the lingering after effects of war on a human life. Along with some realities of the field hospital, the narrator shares how the war undid him as a person, stripped him of his family, and left him in this bar night after night telling the same tale.

One passage reminded me directly of the epistrophe in the opening of O’Brien’s Going After Cacciato, which reads in part, “Pederson was dead and Rudy Chassler was dead. Buff was dead. Ready Mix was dead. They were all among the dead.” Antunes writes, “It was late January, it was raining, and we were going to die, we were going to die and it was raining, raining.” Instead of simply repeating words at the end, Antunes twists those repetitions into something even more magical, but the results are still devastating and they linger in my mind.

In the Land of Sex and War

“I’m traveling the gentle geography of your body, the river of your voice the cool shade of your hands.” – Antunes

What surprised me most about this book was how sexy it was. But the more the narrator tries to lose himself in this woman he’s brought home from the bar, the more his memories are drawn back to the war which makes the liaisons in Portugal seem sadder and somehow makes the ones in Angola (as the narrator and his fellow soldiers try to find comfort in the arms of women) sweeter. The language is gorgeous as the inception of life merges with the end of it.

“I like the way breasts perform a kind of flanking maneuver and rise indifferently to the tremulous, eager height of my kisses.” – Antunes

The Voice of Antonio Lobo Antunes

“The novels as yet unwritten accumulated in the attic of my mind like ancient bits of apparatus reduced to a pile of disparate parts that I would never manage to put together again.” – Antunes

Antunes has a way of weaving two (or more) spaces in time together in the same breath that is unequaled, so I wasn’t surprised to see him do that here with scenes from the war in Angola and moments years later in a bar. What I was surprised by was the images he created with words like “cotton syllables that dissolve in the ear just as the remnants of a piece of candy do on the curled shell of the tongue” and drumbeats that are “concertos of panicking, tachycardiac hearts, only restrained by the darkness from galloping wildly off in the direction of their own anxiety.” Of course, some of this has to be due to the marvelous translation of Margaret Jull Costa, but every sentence made me reconsider my own language. I read the book very slowly because of this, but I loved every second of it.

The Aftermath of War

Did you ever have a dessert so delicious you couldn’t bear to eat another bite for fear of spoiling the flavor on your tongue? I tried to open another book after The Land at the End of the World, but I knew nothing would be quite as good. I leafed through a book of poetry but had to put it aside because I knew I was still immersed in Antunes. Even now, a week later, I had to resort to reading a really familiar book just to have something to read that wasn’t going to compete with his writing. Read this book, if you dare, but know that it will change you and likely your writing forever. I’m looking forward to it.

If you want to get lost in this book like I did, pick up a copy of The Land at the End of the World from Powell’s Books. Your purchase keeps indie booksellers in business and I receive a commission.