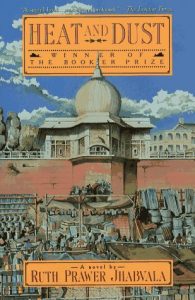 One of the things I was most afraid of in coming to India was replicating the colonial experience. This frightened me because I despise the exploitation of other peoples and cultures and I thought with my oh-so-white skin and complete lack of skill with local languages and norms that I could not avoid being seen as one of those colonizers who expects to be treated as more and better. It also frightened me because I thought I might grow to like it.

As a result, and as I’ve mentioned before, I steered away from bringing along books written from the British perspective (although I’ve read many before). Except one. I brought along Booker Prize winning Heat and Dust by Ruth Prawer Jhabvala even though the prize, the cover imagery, and the jacket description all suggested it was England-approved. But the book was thin and I read so few prize-winning books (usually by choice) and I thought I’d muddle through whatever elitist whatnot the book might offer.

I’m so glad I was wrong.

Although there is one storyline in this book about a bored British housewife, Olivia, in 1923 India, it’s complemented perfectly by the story of Olivia’s step-granddaughter who visits a very different India in the 1970s to uncover the story of how and why Olivia ran away with an Indian royal.

Olivia’s story is actually a tale about a woman who’s questioning all the British convention she encounters as a newlywed who is first encountering British India. She doesn’t like the British society and she’s not afraid to act according to her own ideals. As much as I sometimes questioned her judgment—running off to spend all day nearly every day with a married Indian Nawab (I think this is a prince) without (and without telling) her husband—I admired her spirit—refusing to summer in Shimla just because that’s what the British ladies were expected to do.

As Olivia’s story unfolds, so does that of her granddaughter and here is where Jhabvala displays real mastery, because the two women experience many similar events at similar points in the narrative (from festivals to intrusions of unwanted guests and more) which could become quite cloying. Instead, because Jhabvala has made these stories just different enough, the intersections feel mystical and preordained and as I was reading the book I kept wondering if these two generations would fall into the same trap. 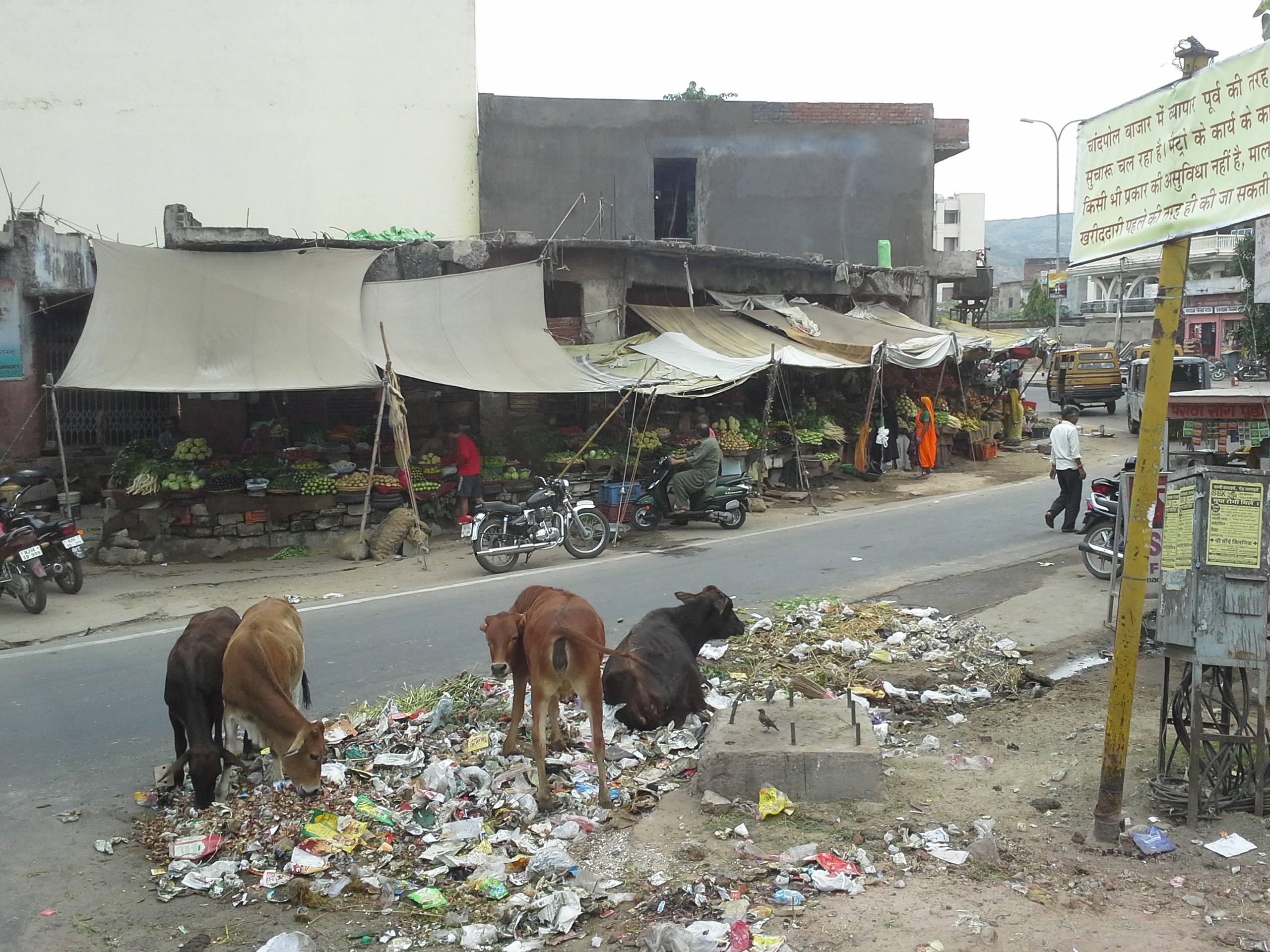 My own perspective on India is much closer to Olivia’s granddaughter, in part because the India she encounters is much closer to the one I see during the day—the bustling emerging economy that’s making its own rules along the way, the street markets and roaming cows, the people who look as though they can repair anything (many things which an American would throw away), and the people who live in any spare space of traffic median they can find.

“For the first time I understood—I felt—the Hindu fear of pollution. I went home and bathed rigorously, rinsing myself over and over again. I was afraid. Pollution—infection—seemed everywhere; those flies could easily have carried it from her to me.” – Ruth Prawer Jhabvala

I refuse to judge the country based on traffic that scares me and mounds of garbage swept to the side of the street. It is different, but it should be different, because there’d be no point in traveling all this way if it was the same. I will not drink the water or eat the street food, but there are over a billion people here who are making the country what they want it to be. Don’t we all have some level of pollution or other problem we want to fix?

But that is not all of India. As an American tourist in Jaipur, I am staying in a hotel that used to be the residence of the prime minister of Jaipur where I swim in a large pool overlooked by peacocks and where an enormous staff is employed to cater to any need I might have and then disappear. Olivia’s set, though likely not Olivia herself, would have been at their most comfortable here behind the walls that separate us from the city.

Last night we dined with a local family in their palace in the old town of Jaipur. They are relatives (distant I think) of the Maharajah and their ancestors moved into the home in the 1760s. Nestled deep inside one of the pink blocks of market stalls and small shops, this home with three luscious courtyards houses several brothers and their families along with five dogs and a tortoise. They live behind walls and glass thick enough to block out the market noise in rooms beautiful in their simplicity that are decorated with family artifacts like pictures of the Maharajah and the Mountbattens as well as the skins and heads of leopards and tigers (decor it seemed as though our gracious hosts would not have chosen for themselves, but here family artifacts and history matter).

Today we’ll go into the jungle at Rathambore to hunt tigers with our cameras. I didn’t bring any more books about tiger hunting, so I’ll be reading a spiritual text in preparation for our visit to Varanasi or maybe a detective novel set in Mumbai.

How India is Changing Me

“She began to write to Marcia, but Marcia was in Paris and it was impossible to explain anything from here to there.” – Ruth Prawer Jhabvala

I’m not sure I’m doing a good job of conveying my experiences, partly because I’m still so far inside of them and things change every day, but I’ll try.

In Heat and Dust, Jhabvala writes, “India changes people,” and I’ve been reflecting on what that means for me. I am aware here of never feeling like I belong anywhere. I don’t know the streets well enough to wander then, and even if I did I’d be an object of curiosity. And the luxurious expat lifestyle (as much as I’m enjoying it) makes this democratic, do-it-yourself girl deeply uncomfortable.

Most of all I feel conspicuous. There are moments I’ve been able to own that feeling of being watched and to embrace what it means to be on display (including the long saunter to the pool where I take a brief swim and then lay and do nothing but be seen). But being in India is making me more and more conscious of how uncomfortable I am being seen whether as an object of curiosity or as a woman. I’m uncomfortable even writing about it here because of everything it implies. Now that India has helped me pinpoint some of the sources that discomfort, I can start to investigate what it all means.

And then there is the spiritual awakening aspect of India. I did not come here for a religious experience, though there are certainly years in my life that would have been my goal. Somerset Maugham wrote of his characters once that he was “a deeply religious man who doesn’t believe in God” and that’s been the case with me for a long time. I flirt with Buddhist philosophy, cross myself like a good little Catholic to ward off the evil eye, and am most at peace when I am subsumed by the power of sitting beneath a large sky in front of a vast ocean.

So when I walk into a temple or a mosque or a gurudwara and feel the immense energies of the places and of the people worshipping in them, I pay attention. I don’t know what is happening and I don’t plan on going home and beginning to worship Vishnu, but I am soaking up the Hindu idea that all gods are one and that we make of them what we individually need. I am attracted to the Sikh vision of equality. I’m even beginning to like the call of the muezzin who wakes us around 4:45 am because of the sincere love of faith embodied in his voice.

I can even feel India affecting my syntax and my gestures. As a mimic—a skill I think I developed to mask the feeling of not fitting in in the many places I’ve traveled—I’m very aware of these things (and have been fighting the change of syntax in this essay), but no amount of energy will allow me to resist those changes.

The one thing I am sure of is that I am not a colonial. At least not yet. So I’ll enjoy yet another sumptuous breakfast buffet where I can eat foods from all corners of the globe while the waiter brings me extra special treats. I’ll relish cool swims in pristine pools. But I will not stop wondering about the social cost of creating a service class or the environmental toll of this kind of tourism on a state with little water. The wheel of the world keeps spinning, but I am not yet ready to accept that “other” or “privileged” is a station I must embrace.

I’m grateful to you for reading along with me as I experience India through books and the windows of a tour bus. I never know when I’ll have access to internet again, so I’m posting these as I go. Sharing the journey with you in this form helps me better understand my days and nights, so thank you.

For other perspectives on what I read while in India, read my experiences of The Death of Vishnu and The In-Between World of Vikram Lall.