You may have first heard of Edan Lepucki and her novel, California, when Stephen Colbert featured the book on his show as part of his coverage of the Amazon-Hachette debacle. California was not being sold on Amazon at the time and he wanted to push the book to the top of the New York Times bestseller list by getting people to buy it from independent bookstores.

But as much as I was watching that battle and I support buying books from indies, that is not why I wanted to read California. See, I’d read Lepucki’s debut novella, If You’re Not Yet Like Me, which is reason enough to buy her next book, but in addition, she’s been really kind to me on Twitter in the few instances where I’ve had a reason to reach out to her (even when I somewhat brashly questioned the use of the term “debut novelist” for someone who’d previously written a novella), plus I love dystopian fiction. 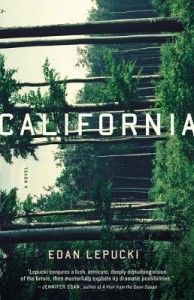 Little did I know that I would love California for a completely different reason and that I would be reading it at the exact right moment in my life. Because the story focuses around Cal and Frida who have made their way out to the woods to live off the land after a series of weather and social events disrupted the societal core. And not too far into the book, Frida discovers she is pregnant.

Pregnancy on My Mind

The timing on my reading this book really couldn’t be more perfect. My husband gave me my copy (diligently sourced from a local indie and autographed to boot) on Christmas day this year–the day after the doctor confirmed we are pregnant with our first child. So while there are loads of interesting things to talk about regarding California, I can’t quite get over how much it spoke to me right where I was at in that moment.

Pregnancy as a Catalyst

I’ve read books before and since where pregnancy was a plot point, but never have I seen it used so effectively as a catalyst to action. Cal and Frida are relatively comfortable living in their small shack with their garden. They have no contact with the outside world except for a nearby family who befriends them and August, a trader who stops by on a semi-regular basis with all sorts of odds and ends. When the family vacates their home (for reasons I’m not going to reveal here) Cal and Frida move in.

But other than that move, they are leading a comfortable (enough) life and there is no reason for the story to move forward. Until Frida suspects she is pregnant. And suddenly, whether it’s for want of resources, fear of birthing her child on her own, or just the sheer desire for community, she sets out after August one day on her own. That quest, although she does return to take Cal with her, sets the two of them on the path to see what life is like outside their Eden. And I can’t tell you any of the things that happen or who they might meet along the way, but it’s so worth reading. I didn’t love love the ending, which is why I only gave the book four stars, but it was right for the story, and you have to respect that.

The thing that was different from how pregnancy is handled in other books is that Lepucki got inside the (somewhat complex) hormonal changes and related motivations of the characters. It wasn’t just “pregnancy=change.” And as a result, I could relate to Frida’s sense of vulnerability and her quest for community. I feel vulnerable all the time right now in a way I never thought I would. I also feel fiercely protective of myself as a guardian of this little bean (who is less of a bean and more of a baby every day) inside of me. Those feelings are so strong, so primal, and Lepucki does a beautiful job of using them to their best narrative potential.

While a lot of things happen in this book, it’s this really rich character development that I enjoyed most and where Lepucki finds her own blend of literary and genre fiction.

How Pregnancy Changes Others

I’ll admit, one of the most fascinating parts of this book for me was Cal’s reaction to Frida’s pregnancy. It mirrored and helped me understand my husband’s reaction to ours. Cal is someone who is relatively comfortable living off the land and he was the instigator for getting the two of them out of the city in the first place. There were definite echoes of The Parable of the Sower in how crucial cultivation was to survival. But what was interesting was how much his provider instincts were triggered by the pregnancy and how protective he became of Frida.

I know (because my husband tells me, because he’s the one reading the pregnancy books right now) that his hormones are changing too to accommodate for our new situation, but I did not realize how much he would feel compelled to take care of me (whether it’s fetching that 40th glass of water or making basically all the meals based on whatever weird requirements I have that minute) and how visceral his need to protect me would become (don’t barrel up and down 12th Ave, really, please). I didn’t realize how much he was ready to be a dad or what that would even look like.

As much as I feel like I need to understand that what I’m going through is normal, it was equally helpful to me to understand more of the context for what he’s experiencing right now and I learned so much from Cal.

Pregnancy is the Future

That isn’t some weird, mystical prediction or assertion that everyone should go have babies now, but one of the things I’ve most wanted to do since getting pregnant is to sit down and watch Children of Men again. Because while I very much wanted to have a family with my husband, I could never quite articulate why, and I thought that movie would help. See, Children of Men touches on one of the same point that California does, which is that without kids, the world ends with us. And I know some people are okay with that (and I am not at all one to judge) but it’s something that I’m realizing matters very deeply to me.

California helped me understand that although I love living in my little Eden with my husband–we’ve been very comfortable here for over 19 years–we’re ready for the catalyst into the next phase of our relationship, our lives, and the world.

Regardless of where you’re at in your life of what your next steps might be with kids or otherwise, read this book. It’s one of those rare ones that I’d recommend to nearly everyone.