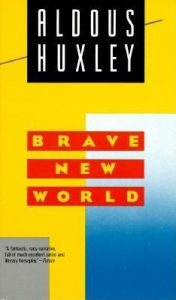 It had been a very long time since I read Brave New World by Aldous Huxley. I own (and proudly wear) the t-shirt from Out of Print Tees, but I was starting to get embarrassed when people made soma references when they saw me in it and I had no idea what they were talking about. So this week, in honor of Banned Books Week, I reread this classic novel and what I found shocked, impressed, amazed, and disappointed me. But I’m not sorry I read it.

I’ve gotten so far inside dystopias that I’ve forgotten what it’s like to read about a utopian society. In 1984 (as best as I can recall), it’s pretty clear that Big Brother is a bad thing and that society is squeezing the very humanity out of people. Whereas in Brave New World, there are large groups of people who never become dissatisfied throughout the book. And as a reader I was left questioning how bad is the bad, really?

“All conditioning aims at that: making people like their unescapable social destiny.” – Aldous Huxley

Do I agree with genetically engineering some people to be lesser? No. Breeding a populace of slaves is bad. Not too much grey area there. But when it comes to a populace zoned out on pleasure, I have fewer qualms. I hate that the creative thinkers are exiled, but I kind of wanted to go away to the Falkland Islands with Helmholtz.

Maybe I think we are already in this brave new world and maybe that’s Huxley’s point. But I do not believe that we can force people to engage in the world and care about change. I don’t believe we’re as socially mobile as we pretend. And that’s probably the biggest difference between the younger me who first read this and the me now. I’m now content with my own desire to change the world and I’ve lost the feeling that I can rally others. I’ve lost the drive to make people live up to their own ideals. I feel somewhat disappointed writing those words and yet also pragmatic. Something to think about there…

“Imagine the folly of allowing people to play games which do nothing whatever to increase consumption.” – Aldous Huxley

The way that Huxley lead the reader straight into this world and gave us a tour (literally) of the London Hatchery is one of the best introductions to a new society that I’ve ever seen in a book. I think, honestly, that it’s part of the reason I had trouble fighting the worldview. Instead of reacting in immediate disgust, because I have a pretty open (suggestible) mind, I was thinking, “Oh, that’s an interesting way of…” and trying to understand what they were doing.

But there were moments that made my blood run cold. And that’s what’s truly effective–like someone pouring a bucket of cold water over you in a hot tub. This starts with the description of the Bokanovsky Process. It was fascinating to see how they grey 96 humans from one egg. But it was also terrifying. The idea of stunting a growth process to get something to “bud” makes sense to me with tomatoes, but when it comes to humans… *shudder*

As a writer, even if you have no interest in this book overall, you must go and read this first chapter carefully. It will change your world building forever. Oh, and read Chapter Three, too. It is the best inter-splicing of narrative I’ve seen since The Land at the End of the World. And the way Huxley builds a crescendo by shortening the passages the farther in you get is mind-bogglingly well done.

I thought I was done with ideological rants after Ayn Rand. I still haven’t read all 70 or so pages of John Galt’s rant in Atlas Shrugged. So when I got to the conversation between Mustapha Mond and the Savage in Brave New World, I was surprised to see that this was the only section younger me had highlighted. Some of the things I highlighted, like, “You can’t play Electro-magnetic Golf according to the rules of Centrifugal Bumble-puppy” were clearly in-jokes that I thought would make me sound smarter if I ever had the chance to quote them.

Others, like “You can’t have a lasting civilization without plenty of pleasant vices” and “truth’s a menace” were things that still spark something in my brain. In some ways they ring true, and in others they do not, and it’s that bridge between the two spaces that I find really fascinating.

What I found most disappointing about this book was the shock and awe of the savage past. Bernard and Lenina’s reaction to it didn’t impress anything upon me and I simply didn’t care. The book waned overall for me from then on because I was not invested in that dichotomy.

I’m flat out against censorship and the banning of books so I was very curious as I read this book why it would be banned or challenged. Turns out the reasons are myriad: sexuality, anti-religious views, depictions of indigenous peoples. I was bothered by parts of the book, sure, but they made me think and I always appreciate that. I suppose people challenge and ban books from fear. Fear that people aren’t smart/civilized enough to make their own decisions, fear of new or different ideas, fear for the children.

In my utopia we can hold a multitude of contrasting ideas. We can be open to new worldviews and inputs because we trust in our ability to think and reason. We can learn new ways of doing things and hold fast to some old ones that work. We are not afraid of what the world will become once we taste that forbidden fruit because we believe that our humanity will keep pushing us to be better as individuals even when we cannot affect the whole. And by that token, the whole gets stronger, smarter, kinder, more human. In that way, I have not given up on my optimism or on the world around me at all.

If you want to test out your own version of utopia, pick up a copy of Brave New World from Powell’s Books. Your purchase keeps indie booksellers in business and I receive a commission.