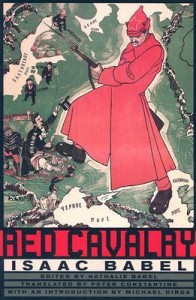 Isaac Babel has a way with atmospheric detail. In several of his short stories in Red Cavalry, he uses descriptions of the setting to shape the reader’s experience and understanding of the tone of the story.

Perhaps the best example of this is the story we discussed in our advising group, “Crossing the Zbrucz.”  In this story a soldier rooms with a woman and her father and it turns out that the father (with whom he is to share a bed) was brutally slain earlier. The details Babel provides early on in the story presage the eerie scene. After describing the flow of the river, he writes, “An orange sun is rolling across the sky like a severed head….The odour of yesterday’s blood and of slain horses drips into evening coolness.” The detail is gruesome at best, but it prepares the reader for the mindset of the narrator. Death is so pervasive that the first thing he would liken the movement of the sun to is a severed head. He knows of the killings that occurred the day before and he recognizes the scent of them on the wind. Not every narrator would recognize the smell of day old death and fewer still would use it as an atmospheric detail.

Babel uses the same technique in several other of the Red Cavalry stories. In “Pan Apolek” he writes, “The scent of lilies is pure and strong, like spirit. This fresh poison is sucked in by the deep seething respiration of the kitchen range, deadening the resinous odour of the fir logs that are scattered about the kitchen.” This is the story of a painter, Pan Apolek, who uses the faces of local people for his paintings of saints. Apolek is commissioned to paint the church and he uses the faces of nonbelievers for some of Christianity’s most important figures causing a general uproar. His paintings are beautiful like the lilies, but they cut with a double edged sword. The “fresh poison” that Babel writes of is the heretical ideas that Apolek is spreading (e.g. that Jesus fathered Deborah’s child). Babel is saying that in spreading his subversive ideas through beauty, Apolek is able to infiltrate worlds he might not otherwise have access to. Apolek is despoiling the comfortable, resinous smell of the ideas of the local people. He is covering over their homey ideas with the poison of his beautiful lilies.

In “Gedali,” Babel writes, “Here before me is the bazaar and the death of the bazaar. Slain is the rich soul of abundance. Rich padlocks hang on the stalls and the granite of the paving is as clean as the bald pate of a dead man.” “Gedali” is the story of the narrator’s wanderings as he awaits the Sabbath. He is wandering among many closed shops, but the description made me wonder if they were closed because of the impending Sabbath—on which no work can be done—or if they were closed for good. Perhaps they are closed for other reasons, because of pogroms, or because of the death of a way of life. The stalls are padlocked up, but the cleanness of the pavement denotes emptiness. There is no litter, no trace of humans having passed through. And the reference to the “pate of a dead man” makes it sound as though the area itself is dead and that it was closed up long ago. Whether these stores were locked up for eternity or merely for the Sabbath, Babel’s description of them enhances the strangeness and isolation of Gedali’s store. Babel likens the store to Dickens’s Curiosity Shop, but he didn’t need that reference to make the shop seem obscure and isolated. He had already done so with the detail of his description.

I know this use of atmospheric detail is something I tend toward in my own work. I admit it is often an unconscious effort in early drafts, but I can see that it is a powerful tool that I would do well to pay attention to as I revise. By being specific about the details I invest in the scenery, I can point the reader in very decided directions. If I am not specific, I can point the reader all over the place. I particularly enjoy this way of dealing with setting because it feels subtle but because it can have a strong effect on the way the story is read. It also gives meaning where there would not necessarily be any. For my novel, this is particularly important in descriptions of the river. A casual reader can enjoy the story without taking notice of this kind of detail, but a reader who cares to find meaning there can. I particularly liked where I felt Babel was going with his description in “Pan Apolek.”  It felt like he was describing his own subversion and that opened up for me the reading of many of the other stories in the collection. I think that is what I particularly enjoy about Russian writers is the layers of the writing. I am not yet skilled at investing layer upon layer of meaning into writing, and in some ways I don’t have the natural need because I am much less likely to be censored, but it is still something that intrigues me. I am interested in how the reader experiences satire and double entendres in writing. It always scares me a little that a reader who doesn’t get it could take the work in exactly the opposite way. I think that is at the root of my quandary over explaining and not explaining. I would hate to see a work used to the opposite end of its intent. Perhaps the atmospheric detail is one subtle way to direct the mind of even the most clueless reader (which I sometimes am).

If this review made you want to read the book, pick up a copy of Red Cavalry and Other Stories from Powell’s Books. Your purchase keeps indie booksellers in business and I receive a commission.