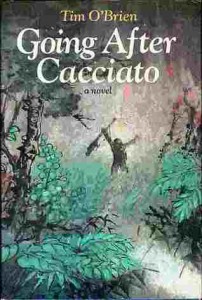 “It was a bad time. Billy Boy Watkins was dead, and so was Frenchie Tucker. Billy Boy had died of fright, scared to death on the field of battle, and Frenchie Tucker had been shot through the nose. Bernie Lynn and Lieutenant Sidney Martin had died in tunnels. Pederson was dead and Rudy Chassler was dead. Buff was dead. Ready Mix was dead. They were all among the dead.”

So begins Going After Cacciato by Tim O’Brien. In six sentences he repeats the words “was dead” five times and “death” or “died” three times. With this repetition, he sets a horrible scene—a battlefield in Vietnam where the men expect to die—and it becomes easy to sympathize with Cacciato as he sets off on foot for Paris. France.

What is O’Brien Doing with this Repetition?

What O’Brien is doing, repeating a phrase at the end of clauses, is called epistrophe. This rhetorical device is meant to bring emphasis. But like its sibling, anaphora (same thing but placed at the beginning of clauses), epistrophe adds more than emphasis—it creates an incantatory effect. It creates magic.

Writers are often taught that repetition is a bad thing, but if we look at the world around us, we can see how entrancing this effect is. Think about the verses of the popular song that are stuck in your head right now—nearly any song will do. Even if the phrases do not repeat within the verse, the verse itself is a repetition and the words become nearly impossible to forget.

Because O’Brien sinks the phrase “was dead” so deep in our psyche as we read this passage, we feel the inevitability of death as much as the soldiers do. It becomes accepted. This may sound callous, but it isn’t. O’Brien is setting the reader in the same psychic landscape as the soldiers. He is also allowing himself a lot of freedom.

What do I mean by that?

By building a grand expectation of death and dying in these first sentences, O’Brien doesn’t have to mention death at all for a very long time. He is free to explore his characters and the odd situation with Cacciato for pages at a time without returning to the topic of death. That’s because the epistrophe has sunk in and the reader is repeating (knowingly or not) “was dead.” There is a limit and if O’Brien never brings the topic up again, the opening would be wrong for this book. But the next time he does bring up death, it builds on and affirms this rich incantation that he’s already created for us.

In fact, O’Brien waits a full page before bringing up death again (I think he could have waited even longer). In another book, that might seem like a short time, but the intervening passage is filled with rot and missing soldiers and lost limbs (things that also contribute to the general atmosphere of the book) in a staccato, Hemingway-esque style that is also uniquely O’Brien.

I am only a few pages into this novel and I don’t have any idea what’s going to happen, but I am excited to see how O’Brien builds on his epistrophe.

I started using anaphora in my own work in an unconscious way. It wasn’t until an advisor pointed it out that I was able to play with the power of this device. And there is power in it. Until picking up Going After Cacciato, I had thought it was a device better suited to meditations and magical stories. O’Brien is showing me how limited my imagination was, and I can’t wait to play with epistrophe next.

If this review made you want to read the book, pick up a copy of Going After Cacciato from Powell’s Books. Your purchase keeps indie booksellers in business and I receive a commission.