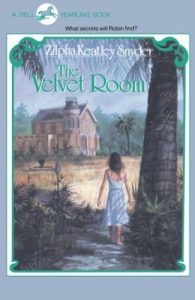 Sometimes it’s hard to know what exactly made you who you are today, but one of the joys of motherhood for me is rediscovering the books that shaped me as I share them with my son. I first noticed this on re-reading Mike Mulligan and His Steam Shovel and finding the beginnings of my socialist tendencies there. The few times my son has been interested in The Story of Ferdinand, I’ve remembered where I first felt the peaceful pull of sitting in the grass beneath a tree, sniffing the flowers. But nothing has smacked me as hard in the “OMG is that where I got that?” as The Velvet Room by Zilpha Keatley Snyder. And while this is partially because the book speaks to some tendencies I probably already had as a fourth grader, it’s also a deeply artful book, which I think might have cemented forever my worldview.

Not a lot of nineteen-year-olds dream of owning a house, but when I moved to Seattle so many years ago, I knew I wanted a big enough house with a fireplace and a yard and that was where I would live and eventually raise a family. I was lucky enough to have the family resources (a down payment and a co-signer) to get started on that dream and this summer we finally paid the house off. Was that why I picked up The Velvet Room when suggesting books for my son? It might be, but not consciously. He’s in a spooky place and I remembered there was a mystery and talk of a ghost and I thought this might be my chance to share this book with him during our early morning hammock reads in the grass beneath our cherry tree.

Robin Williams wants a home more than anything. Her large family has been traveling for the last three years, picking up whatever field work they can. They’d once had a home, but the Depression and her dad’s health robbed them of that security and now they live in whatever workers’ housing is available (sometimes resorting to sleeping in the family car). When their car breaks down in front of Las Palmeras, an abandoned mansion on an apricot farm in California, she is smitten. Already in this first chapter, the die are cast.

When I read of their itinerance and how deeply Robin longed for a home where they could stay, I felt a deep kinship. We didn’t move a lot when I was a kid, just an early move a few blocks from an apartment to a house, one year abroad in elementary school and another in high school. Still, I’ve always longed deeply for the feeling of being settled, preferably someplace quiet where I felt like I could be myself. Maybe Snyder felt the same way, maybe fourth-grade me drank the values of this book in, but it was jarring how much I still relate to this book.

The second thing that struck me while reading this book was how well Snyder helped us see the world through Robin’s eyes as she sets up the hierarchy of the farm, starting with the second and third chapters. The family is buoyed when her dad gets a job at the ranch and to learn the job comes with a house! They climb in the back of the foreman’s truck for a quick ride to their new home. And Robin keeps watching for that home as they pass first the large, modern home of the owner, peeking out from behind a hedge. It’s the tease of a real house Robin could dream of, but it’s too big, too fancy to be theirs, she daren’t hope. Then they pass a lawn and an immaculate stable. After the horses comes a white picket fence and “a neat little house sat securely on a patch of green lawn.” She knows it isn’t theirs either, but hope lingers. The road turns from gravel to deep dirt ruts and they keep driving to Palmeras Village— “It had been right then that Robin found out about despair” as she realized they were about to unload into one of the worn two-room shacks where the workers lived.

Snyder continues to use distance, architecture, and landscape as mechanisms to tease out Robin’s desires (and ours). Everything has meaning and history, from the large stone and adobe (yes, the mix is intentionally weird) mansion of Palmeras house to the little Irish cottage behind. As Robin navigates the idiosyncrasies of the place, we learn about the history of the family who has lived there for hundreds of years. We are also constantly reminded about the differences between what Robin has and what Robin wants as she traverses the distances between. Eventually Robin is given secret access to the sanctum santorum, a fully stocked library inside the otherwise abandoned Palmeras House where she can linger and read. It is here that Robin is truly at home, to the extent that she’s content even dusting the tables. Writing these words in my small office with custom-built (by my husband) floor-to-ceiling bookshelves and a lifetime of tiny objects and pictures around me, I feel deeply Robin’s peace at having found a place where her desires are satisfied, even for a few hours at a time.

Introducing My Son to Inequality

I am very aware of how lucky I am to have this home I can now call mine. I am also deeply aware that the city I once dreamed of is now wildly unaffordable to most working families, and it’s something I want to talk to my son about so he doesn’t grow up with a narrow vision of the world. The Velvet Room has helped us have those talks and more.

Snyder uses personal relationships to illustrate the divides between classes on the farm almost as well as she uses architecture. The best example of this is Robin’s relationship with Gwen, the owner’s daughter. Gwen is a winning girl, the kind of blithe, darling creature people are attracted to and don’t know why. Gwen is also completely unable to see her own privilege. This makes for a fascinating push-pull between her and Robin, who likes Gwen but who is unable to forget the differences between them. Gwen’s mother lingers in the background with a tight smile to remind us that Robin is not imagining the gap, she is a picker’s child who is accepted only to the extent that she nudges Gwen toward taking her schoolwork and music studies more seriously.

Snyder’s use of Theresa, daughter of another worker, is less artful, and I’ll admit I cringed while sounding out the heavily accented Spanish. Snyder gets the sounds of the accent right, but the character is unfortunately never full enough to make her anything but a stereotype. We haven’t finished the book yet, but I think I recall the Caucasian/Hispanic divide being an issue in the resolution of the mystery, and while Theresa as an alternative to Gwen echoes some of that, she’s not a realized enough character to properly pull that weight.

I have been grateful for the way Snyder takes us into the apricot pitting shed. It’s been hard to explain to my son (who I probably over-indulge with every part of my heart) that Mommy has meetings he can’t always sit in on and that sometimes I need to work to pay for our home and his roomful of toys. Reading about the pitting shed and the fact that all the children who are able to help help, whether they are old enough for a work permit or not. And that the smallest children who cannot help are left to entertain themselves at their mothers’ feet for more than 12 hours a day. To be clear, I don’t want that for anyone, but I do know that it was like that for centuries and still is in many places. And while I do not expect him to take up my copy editing (and would, in fact, prefer he not read Slack over my shoulder), it is important that he see work and understand different ways of working and that what we have comes from something—even the apricots he picked out at the store this week.

When fourth-grade me set aside The Velvet Room for my someday kid to read, I had no idea the experience would be this rich. That I would learn so much from the book all over again and that it would give me tools for teaching my son. But I’m grateful. Are there childhood books that you’ve held onto (either physically or in your heart) that you’ve learned from as an adult? Please tell me everything.