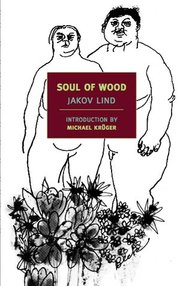 Most stories don’t smash me to bits. As I read them, I’m moved, enchanted, worried, dismayed, relieved, sometimes annoyed. But Jakov Lind’s Soul of Wood and Other Stories just left me flattened, feeling empty, and as if I were stranded in a strange shapeless place. The question “Wow, what was that all about?” kept looping in my head like a song, and I was unable to find an answer.

But I think the answer lies in not only the mad brilliance of the story itself, but more so, for me as a writer, in the craft of how Lind created the story. By story I mean the novella, Soul of Wood, which opens the collection. The later short stories are also impressive in their own way, but Soul of Wood is the masterpiece. It’s set in Austria in the 1940s and follows Wohlbrecht, a crippled Austrian soldier, who works to hide Anton Barth, a mostly paralyzed Jewish boy, in a mountain cabin. He enlists the help of Alois, his brother-in-law, and the first half of the book centers on the two’s endeavors of dragging Barth up through the woods while trying to avoid the Nazis and their random air attacks.

Shot from all Sides by Point of View

Lind’s voice is somehow casual, witty, romantic and brusquely masculine all at once. It doesn’t just blast its way through the narrative, but rather tumbles with a clear urgency. This was probably the first technique that I’d love to emulate (oh, if I could.) But what’s crazier and even more unattainable is how the point of view wanders. It, at times, becomes dreamy and surreal before landing flatly in stark reality. Take, for instance, the following passage occurring early in the story, which by the way could be a spoiler, depending on how you view the narrative. Read at your own risk.

As Wohlbrecht and Alois return from the cabin, they stop at the side of the road. Wohlbrecht lays and dozes in the hay as Alois talks of his post-war plans. Alois plans to visit Rumania in an effort to cure his epilepsy. In one paragraph, Alois talks about a renowned doctor and his treatment that Alois believes will mend all aspects of his life. In another, the grand wealth that he and all of Vienna will enjoy after the war. As readers we are relaxed at this point in the passage, imagining hopeful situations and feeling a tender intimacy with Alois.

Then: “The loud engine sounds woke up Wohlbrecht.” This kicks off a random rotation of omniscient narration, stream of consciousness and Wohlbrecht’s spoken words. There’s little punctuation to help us distinguish between what’s happening, what’s being said and what’s being thought.

“Jumping Jesus, he cried, they’ll fly right up my ass. A burst of machine-gun fire beat down like rain on the tin roof and by the time Wohlbrecht cried ‘Cover!’ Alois was dead. Hit right in the back of the head. The blood gushed like a geyser. Alois, Alois, Wohlbrecht yelled thinking he was still asleep. Alois, where’d it get you? Alois didn’t move. Alois, don’t pretend, say something. Alois said nothing. It was so still he could hear a beetle scratching in the hay.”

Here, this mishmash of point of view hits us in the gut. We’re dealing with the sudden chaos of the moment, which poetically reflects the sudden chaos of the entire war experience. It also shows the contrast between life and death, the potential of the future and the negation of it in how Alois is dreaming of better years to come when he is suddenly killed. By the end of these few paragraphs, we’re jarred, upset, and left processing what just happened – as Wohlbrecht is. Lind doesn’t just describe trauma, he hurls us into it so we experience it first hand. That he does this by manipulating point of view is amazing.

There are other amazing aspects to Soul of Wood as well. The plot of the book later bends back on itself and we discover that much of the seemingly random events, forgotten images and off-hand mentions of names and people actually come together in a larger symbolic coherence. That coherence makes this novella one of the most under-appreciated of our time.

The Other Stories in the title are mostly outlandish, grotesque short stories rooted in the trauma of World War II. In one, a piano teacher is haunted by his past as an S.S. officer. A traveler stumbles upon a family of cannibals. A man follows his neighbor to a kind of speakeasy only to find a featureless woman who somehow sets him free. A killer about to be executed dreams of killing his father in revenge. Two men, a Jew and a Catholic-converted-Jew, share a snug hole as they hide from the Nazis. Somehow these shorter pieces unfold with a tongue-in-cheek wit. They’re also somewhat allegorical though what they represent is too complex and hidden to explore here. Suffice to say they embody Lind’s seemingly unstable spirit, macabre wit and clever narrative arcs, which leave writers like me both horrified and smiling.

If this review made you want to read the book, pick up a copy of Soul of Wood from Powell’s Books. Your purchase keeps indie booksellers in business.