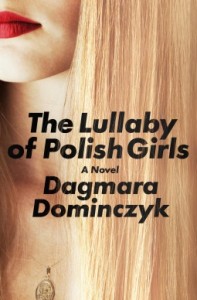 I can’t remember where I first heard of The Lullaby of Polish Girls by Dagmara Dominczyk a mere two days after it was released, but I know the very next thing I did was add the book to my Goodreads. Within a week I had purchased a hardback copy from Elliott Bay Books. I regret none of that. What I do regret is letting the book linger on my shelves for five months before reading it. I thought it would be an easy read, maybe a little pop-y and I was never quite in the mood. My mistake. The book was fantastic and I’m so glad I threw it in my suitcase for my anniversary getaway this past weekend.

I’m a sucker for all things Polish. I spent a year there on foreign exchange in this wondrous time (1994-5) when the country was emerging from Communism and hadn’t yet found its feet as part of Western Europe. I was so enthralled with the people, the culture, and the history that 10 years later I started drafting a novel about the place to try and grasp in fictional form some of the complexities of the place and people I loved.

As I’ve been querying agents for my novel, I’ve been seeking out books about Poland during that transitional period to 1) see if I got it right, 2) find out what agents and presses are interested in the period, and 3) recapture some of the magic. So I was predisposed to like The Lullaby of Polish Girls, even if it hadn’t been really well written.

A Book in Context

Minutes before I opened The Lullaby of Polish Girls and started reading it, I read the final pages of Far from the Madding Crowd by Thomas Hardy. It was a strangely apt transition, because I’d been really interested in Bathsheba Everdene’s unusual strength of character for a literary woman of her period. At least in the beginning. Then she got kind of wimpy and I started seeing so many of the gender limitations of the era. I was getting really depressed, actually, despite the fact that I was away on vacation and reading in a spot overlooking the sea.

About The Lullaby of Polish Girls

How wonderfully refreshing, then, to open Dominczyk’s book and find not one but three strong female leads. And they weren’t cardboard strong or representing some idealized female power. Instead, Anna, Kamila, and Justyna are beautifully round characters. All three are Polish by birth, although Anna has emigrated to America, and their mothers knew each other before the girls were born. Anna first meets Justyna when she returns to Poland for a few brief moments as a tween in 1989. Justyna tells Kamila (who had been away that weekend) about Anna and Kamila takes up a deeply personal correspondence with her.

So what we get to see as readers is the lives of these women in 2002 and then fully-realized flashbacks of them as they are growing up in 1989, 1992, 1995, and 1998. It’s a simple setup. Each chapter has a section focused on Anna, then one on Kamila, and a third on Justyna. The chapters alternate between the present (2002) and an ordered sequence of years in the past. But what’s happening behind that simplicity is these girls are growing up and changing as rapidly as their country is. When Anna visits in 1989, Poland is still in the last stages of Communist rule. By the time the narrative ends, Poland is two short years away from joining the European Union. That’s a whirlwind of history and it all happens in 217 pages. But Dominczyk lets this exist as rich background rather than thrusting the history on the reader.

Dominczyk is also using her characters to describe the myriad stages of exile of the Polish people and the longing that produces. Anna’s father is a refugee from the Communist government. She was seven when her family came to the US to live the American Dream. Kamila’s parents came to the US after the Berlin Wall fell and are in the country illegally. When we first meet her in 2002, Kamila is visiting her parents as she flees from a bad marriage in Poland. Justyna and her family have always been in Poland. It’s remarkable that three families can showcase such a wide variety of experiences and it never comes off at all forced. There are some really gorgeous complexities that arise in the girls’ interactions because of their degrees of escape from Poland and it’s so well handled.

I’ve seen these experiences up close and Dominczyk gets them just right. When I was in Poland, I remember people telling me about an aunt or a cousin who had gone to the US as though I might have met them. They’d talk wistfully of America like it was the promised land. And a Polish friend I had in the US saved every year so she could go back and visit that part of her past and her family. She knew that people expected something from her because she was American–gifts or hope or a way out–and I think that always reminded her of what she had in the States. Meanwhile, as an American, I would have gladly stayed in Poland if I hadn’t been 17.

But what I liked most about this book was the strength of those three women. Even as girls they are sharply aware (of each other when not of themselves) and they make mistakes and choices and life happens to them, but they are strong in their very core. The image I came away from Poland with was of an entire sex who was genetically blessed, good at all things home-related, and making their way in the workforce as scientists and economists. It’s a broad generalization, of course, but this book captures some of that “we’ll forge ahead no matter what” spirit that I so admired.

I haven’t been back to Poland. Maybe because it’s not in my blood I’m afraid that I won’t relate to the place after so many years. But I was grateful to Domiczyk for allowing me to revisit and broaden my memories. And I was grateful that she created this rich, tightly-written story. I’ll re-read this book with pleasure and not just as a vacation read.

If you want to visit a little piece of the Polish-American experience, pick up a copy of The Lullaby of Polish Girls from Powell’s Books. Your purchase keeps indie booksellers in business and I receive a commission.