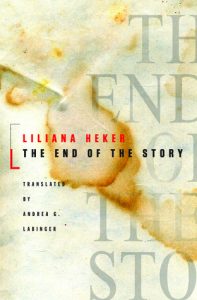 Some books are so important that if you care at all about understanding the history of a place, you have to read them. The End of the Story by Liliana Heker is one of those books. And although the book is gorgeously written, it is not an easy read. If you’re interested in Latin America or stories of how people rise up against tyranny, read it anyway–it’s worth it.

I asked for a review copy of this book because it’s about a time in Argentinian history that I desperately want to know more about–the Dirty War. When I visited the country in the mid 1980’s, their political turmoil had settled down compared to Chile’s. But I’ve always felt that by understanding what happened in Argentina, I would understand more of what was happening in Chile while I was there and who I was because of it. Still, my investigations have been limited to watching movies like La Historia Oficial which is about a woman who starts to wonder what really happened to the parents of her adoptive daughter.

Heker doesn’t flinch as she tells the story of Leonora’s abduction in Buenos Aires and what it was like for Leonora as one of the desaparecidos–locked in a dungeon and tortured. What makes the book even more interesting is the narration of Diana Glass, a writer and friend of Leonora’s who clearly idolizes her.

“Diana feels she has reached something, the end of the beginning, she thinks, a moment of supreme hope or supreme beauty from which all paths radiate to change the world.” – Liliana Heker

But Leonora is a human, not necessarily a heroine. I’m going to reveal a few spoilers here, so skip to the next section if you don’t want to know. I loved how Heker took all of Leonora’s ideals and intellectual curiosity and used them to turn her character 180 degrees from where we expect her to be.

Although there are plenty of clues that she will become the lover of one of her torturers, it still hits you in the gut. But it also seems natural. Some have written that she does so to save her daughter, but I think that’s a cop out. I strongly believe that Leonora used her grand IQ to find empathy for the enemy. And as the book unfolded, I couldn’t blame her for it. As much as I disliked her decision, the writing is good enough to make the decision seem weighty and wrought as opposed to flighty and self-serving.

That said, many could blame her for it and there was apparently much discussion when this book came out in Argentina because people felt it betrayed the revolutionary spirit. Read an essay by the translator, Andrea G. Labinger, for more insight on that. As much as I loved Isabel Allende’s Of Love and Shadows, Leonora is no Irene Beltrán and I liked The End of the Story better for her complexity.

“‘The story I wanted to tell ends, it always ended, in that first chapter. Because the awaited woman will never fight, never wanted to fight, the same revolution as the one who awaited her hoped for.'” – Liliana Heker

Heker accomplishes a stunning feat of framing this story as though it begins and ends in the same place. She plays with Diana’s nearsightedness in a way that could be a cloying metaphor and yet isn’t. The writing is beautiful and subtle. There is a depth in the way the stories of Diana and Leonora converge that I haven’t quite processed yet, but it did make me turn from the last page back to the first and start reading again.

“The late October afternoon when Diana ran into Professor Ordaz, the word disappeared had not just become limited in scope.” – Liliana Heker

But I didn’t start reading over again just because I loved the book. I also started reading the book over again because I’d spent a majority of the book trying to parse out where exactly I was in time. As Heker’s scenes drifted between 1971 and 1976, I kept wishing I knew more details of the history because I was honestly lost. I tried writing the year in the margins but kept finding myself lost. There were some markers–like budding trees–that should have made finding my place in time easier, but because the seasons in South America are reversed from those in North America, I only found myself more confused by the mention of October.

When I eventually gave up trying to understand when what was happening, I liked the book better for it. Because the ethical and moral complexities are rich enough on their own. I didn’t need things that felt like “facts” because they were only a distraction from the deep exploration of human behavior under stress. And really, in the best of ways, there is nothing simple about this book.

If you can surrender to being lost in time (or if you’re a more meticulous reader than I), you must read this book. It will challenge what you think you know about yourself and your politics and you will be richer for it. I know I am.

If this review made you want to read the book, pick up a copy of The End of the Story from Powell’s Books. Your purchase keeps indie booksellers in business and I receive a commission.