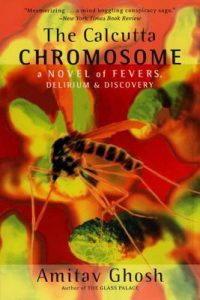 I started reading The Calcutta Chromosome: A Novel of Fevers, Delirium & Discovery by Amitav Ghosh because I’ll be traveling to India in just over a month. The book had been in my to-read pile for ages and I’d heard good things about it, I just wasn’t ready to read it… until now. And what I found in those pages made me glad I waited to read it, because if I had read this book at any other time, I would have missed what became the central lesson of the book for me: thinking beyond the expected.

I have to admit, this book was really slow going for the first half. The first chapter feels like it describes a semi-dystopian future where Antar is scanning relics of the past. He soon recognizes an ID card of someone he once knew in India. Then we are plopped down in 1995 where a man named Murugan is on the trail of a British scientist from 100 years before (which felt like a nonfiction account of curing malaria). Then the story flashes to that scientist. Then we hear of another scientist at the same period (whose subplot feels like a mystery novel). And a writer (ghost story).

There are some connective threads between these stories–it’s not like I had no idea where we were going–but I soon found myself wondering why Ghosh strung these stories together. Each was interesting on its own, but I found the disconnection exhausting and couldn’t read more than one (short) chapter a night.

“You also have to remember that she wasn’t hampered by the sort of stuff that might slow down someone who was conventionally trained: she wasn’t carrying a shit-load of theory in her head, she didn’t have to write papers or construct proofs… She didn’t care about formal classifications… She was working toward something altogether different.” – Amitav Ghosh

Somewhere in the middle I saw those threads start to form a whole and I realized it was my expectation of this book that was standing in my way. I didn’t understand the genre because it was unlike any genre I’d read before. It was many genres woven together to form this one new way of telling a story that was perfect for this book. The mishmash was intentional and had I been more open to the novelty of experience, I might have seen what Ghosh was doing earlier. Either way, I’m glad I didn’t quit reading.

I absolutely will not tell you more about this book because I feel like the discovery is part of the joy. Just know that to best enjoy this book, I hope you will surrender to it earlier and with less fight than I did. Love it for what it is.

The Extraordinary in My Own Life

Bloom: I can’t wake up next to another stranger, who thinks they know me, or even wants to know me, cause I don’t know – who – I’m thirty five years old, and I, I’m useless, I’m crippled, I don’t, I’ve only ever lived life through these roles that aren’t me, that are written for me by you.
Stephen: Tell me what you want.
Bloom: Why? So you can write me a role in a story where I get it? You’re not listening to me. I want a real… thing, I wanna do things how I don’t know are gonna work out, a-I, want, a…
Stephen: You want an unwritten life.

In The Brothers Bloom (which happens to be one of my favorite movies), Bloom tells Stephen (his older brother who had been scripting cons for them throughout their lives) that what he wants most is an “unwritten life.” That phrase has stuck with me ever since 2008 when I first saw the movie, because it captured something I longed for so desperately but could never name.

My parents would tell you that I was always going to live life on my terms. Whether it was going to preschool in my grandmother’s pumps or the clown costume I frequently wore for years after that. My decision to become a teen rebel at 12 (something I turned right around to become conservative at 17, just when one group of friends was only starting to rebel). They wouldn’t know about the day I stood on an unremarkable street corner in Poland fingering the passport in my pocket and dreaming of running away to create a new, anonymous life in Paris. But they shook their heads and supported me when at 19 I decided I wanted to buy a house. So when I started my MFA in creative writing, I’m sure the only thing that would have surprised them is if I wasn’t surprising them.

But inside, where it counts, and in clutch moments where I feel like I have the choice to follow an extraordinary life, I feel like I panic and then fail. Part of my problem is that always being on the outside of expectations is exhausting. Part of it is that at times I find myself living in opposition to expectation rather than figuring out what I really want to do. And part of it is that deep in my heart I long to be normal, too. I want a husband and a house and a dog. I want to have kids and a beach house and to be able to afford all of it. But I still want that sense that I am following my own path.

This struggle has come into sharp relief lately when I’ve come to a place where, after a few years of just trying to make it day to day, I actually have some choices. I have a job that I can in many ways make whatever I want. I have a literary career that could possibly flourish if I don’t let it languish. I am married to an artist who understands how important it is to nourish that crazy burst of inspiration in my soul. And still I feel like I am failing myself.

I cannot tell you how many times recently someone has suggested that I could make a go of it as purely a novelist–kind people who would be thrilled to see me follow my dreams. And my answer is always that I can’t. Not because I don’t want to but because I don’t want the pressure. I want to write without having to worry about sales or what people think. And so I limit that dream because I know how much I need to be me, even if it’s in a private way that only I see.

But the pressure to be extraordinary on the outside–to make my own rules and just move–is building inside me.

I don’t know what happens next. I leave for India–a country I’ve dreamed of but never thought I’d get to–in October. I will continue working to pay the mortgage on my house. I might even take a few risks and see how far I can actually stretch the definitions of that job. And I will go back to writing–the thing that nourishes me and I’ve neglected for far too long.

Perhaps at Sarnath I’ll have some Buddhist revelation. Or I’ll have a Lovecraftian moment that will change the entire future of the world. Whatever happens, I hope I have the strength to start to do things in my own way again and to love myself the way I am. Because I don’t know what an extraordinary life means to me yet, but I do know I’ll gladly settle for an unwritten one.

If you want to dig into this world, pick up a copy of The Calcutta Chromosome from Powell’s Books. Your purchase keeps indie booksellers in business and I receive a commission.