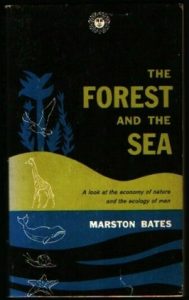 I don’t usually read nonfiction. In fact, it’s the one genre I get snobby about (especially those self-help-type business books that regurgitate info rather than creating anything). I really do have strong feelings about those books. But the rest of nonfiction, for me, simply falls victim to my desire to lose myself in the dream worlds of poetry and fiction. So I have no idea what inspired me to pluck The Forest and the Sea by Marston Bates, but I’m glad I did because it opened me up to a whole world of ideas and helped me see the world from a variety of fresh perspectives.

The Forest and the Sea is a tiny book about just that, the creatures, vegetation, and environment of the forest and the sea. He explains and investigates, in a very accessible way, the parallels and differences between these environs. He also looks into man’s relationship with our environment. I am not certain that this book is a precursor to the environmental movement, but I do see how it could be a rallying cry to create one, even for someone as disengaged with that on a daily basis as me.

I actually didn’t even know why I had The Forest and the Sea until I opened the front cover. It’s a tiny little paperback with snails on the cover and it just doesn’t look like something I’d buy or read. So I knew it had either come from my grandmother’s library or my mother’s. In the upper-right corner of the first page was the name “McKetta” in a handwriting that wasn’t quite my grandmother’s but it was definitely not my mom’s. Then I read the dedication and title pages. The book, written in 1960, is dedicated to Bates’ Zoology students at the University of Michigan.

I was holding my father’s textbook. He would have been at Michigan a few years after that, actually, but the coincidence was too great. As I read this book, I felt closer to my dad (who I’m proud to say reads this blog) and found myself considering each bit of knowledge from his point of view. He’s a forest economist by trade and that experience really enriched my reading. It was the next best thing to talking with him about what I was learning

If you have family textbooks available to you, go read one now. It’ll change the way you view all the facts.

I was hardly a dumb blonde in school, but somewhere along the line, I started to treat science as this weird other thing that I could never understand. It’s a shame, really, because when my husband turns on Nova, I usually wait for the next day’s summary. I do care. I am interested. But my specialization of knowledge has focused so deeply (especially lately) on the literary that I think I’m limiting myself. The Forest and the Sea opened, in really intelligible language, a whole new world to me and I’m so glad I read it. Because science isn’t jargon or formulas anymore than literature is jargon or sentence diagrams. I just forgot that for a little while.

I do worry about our effect as humans on the environment (as does Bates, especially toward the end of the book) but I sometimes get lost in the political rhetoric around global warming. The whole thing makes me want to disengage. So when Bates writes “We are still living in an ice age,” it is so easy for me to cut through all that noise and pay attention to the science in front of me. He does have an agenda, but he’s relatively transparent about it, and I was so grateful for the chance to engage with what he was saying instead of having to understand then fight a hidden agenda just to understand the truth behind the words.

If you’re like me, you are sick to death of biped aliens in movies with two eyes and maybe, if the creature designer was feeling really creative, four fingers on each hand instead of five. It’s as easy to get stuck in a creative rut as it is in a reading one, but there is so much out there.

When I started reading Bates’ descriptions of how and why undersea creatures and vegetation had developed the way it did (how the wavelengths of light fish have access to changes their coloration and that their eyes are very sensitive or even blind because light isn’t a primary part of their environment) There were about five minutes where I thought I might try to be the next Ursula K. LeGuin. I wanted to go out and design a new world with different constraints and see what creatures developed as a result.

I know there are amazing science fiction writers out there who are way into this stuff (including LeGuin) and I probably won’t be poaching on their territory anytime soon. But it was a relief to start to think of something like creature design in a totally new way for me.

The Perspective of Balance

One of the most exciting parts of this book for me was when Bates started talking about seawater as an equilibrium and how complex that equilibrium is. I loved the idea of the environment balancing itself out and the way he described it, “Materials are constantly being added, but materials are also constantly removed” was so simple and clean that it allowed my brain to take off in all kinds of crazy directions and think about how much I value balance, how I can achieve it, and what that might mean for my work. It reminded me of an amniotic fluid that I could run off and let my work and my life gestate in.

There’s so much else in this book, inter-connectivity, the gorgeous metaphor of the forest being like the sea but on land, and wonderful stories about Bates’ own research. And it’s all completely intelligible to a non-scientist like me. It was a delightful book to read to broaden my knowledge of the world at large.

What I’d love to know about, though, is books you’ve read that have been outside of your comfort zone and how they’ve influenced or changed you as a writer.

If you want to read The Forest and the Sea, pick up a copy from Powell’s Books. Your purchase keeps indie booksellers in business and I receive a commission.