I always think I like Italo Calvino because his sentences are as clean as his ideas are wildly creative. I know he was at least as interested in the form of writing and the semiotics of text as I am and I like Calvino so much that I own every one of his books that was ever translated into English (plus a few that weren’t). But that wasn’t where I was when I picked up Mr. Palomar on a recent winter’s night. I didn’t need my mind blown like it was with Invisible Cities and I didn’t need to re-imagine narrative like I did when reading If on a Winter’s Night a Traveler. I wanted clean enough writing that I could get something out of it in the few pages before I passed out—something that would subconsciously help me clarify my own thoughts and sentences.

Books. They always seem to give me what I need instead of what I thought I wanted. Maybe that’s why I love them so much.

Reading a Wave: The Subtlety of Form

“The sea is barely wrinkled, and little waves strike the sandy shore. Mr. Palomar is standing on the shore, looking at a wave. Not that he is lost in contemplation of the waves. He is not lost, because he is quite aware of what he is doing: he wants to look at a wave and he is looking at it. He is not contemplating, because for contemplation you need the right temperament, the right mood, and the right combination of exterior circumstances” – Italo Calvino, Mr. Palomar

In these first few lines of “Mr. Palomar’s Vacation,” I was entranced as Calvino describes the ocean. I thought it was because I, too love watching the ocean and reading the waves. I thought it was because Calvino captured the ambivalence I sometimes feel when I’m trying to settle into a meditative activity like watching the sea or reading a book.

I think I was two pages into the story when I realized what should have been obvious from just what I quoted above. The story is a wave. Mr. Palomar laps his attention out to the sea and then pulls it back inward to experience his own fluttery anxiety. This happens again as Calvino pours all his writerly attention into the next incoming wave and then pulls back again to examine more closely Mr. Palomar’s interior state.

In the few pages that make up this story, Calvino pushes us out into the sea and pulls us back over and over. What might sound like an exhausting activity is actually a transcendent experience. As is the case with actually watching the ocean, the reader experiences a fractal-like delving into the two characters here: the ocean and Mr. Palomar where with each paragraph we see more clearly the details of both.

Calvino can do this because his language is so clean. If the story had been laden with adjectives, I might have missed the underlying form entirely and instead been mildly bored by a scene where not much ever happens except a neverending push-pull between man and nature where neither progresses much.

Instead, I sat up in bed and started rummaging for a pen to annotate this marvelous book. I needed to understand how Calvino was doing so subtly something I’ve only managed to clumsily muddle through as I divide pages in twos, threes, and fours to show the movement of energy through a poem or reconsider the shape of a text and accompanying imagery to convey a larger story than is evident from the words on the page. I’m not sorry I’m making big moves like that in my own work because I think I need to in order to understand the shape of things for myself. But I do hope I someday come close to the subtle mastery of making a paragraph that is a wave, rather than simply looking like one.

The Index: Reconsidering an Entire Work

Why might a 126-page book need an index? That was my thought, anyway, when Mr. Palomar flopped open to its back pages a few nights later to show me what else I’d been missing. Because I was only reading a fragment or two a night, I hadn’t yet registered that these tiny scenes were thematically organized. It turns out each chapter is contemplated in turn from a visual, anthropological, and then speculative angle.

To be honest, now that I’ve had time to contemplate this form a little, I’m not sure it’s necessary for this read of the book. The stories are rich and interesting enough in their own ways without being part of this larger design, but I love that it’s there for future, deeper reads as I hone my own mastery of form.

What is it About Form, Anyway?

As I plod through my own experiments with form, I feel a bit sometimes like I’m creating this narrowly-defined reading experience for an audience who might otherwise miss the subtleties of what I want to say. Calvino shows me, though, that in the hands of a master, form can be an overlay (or an underlayment) to a story. Though it sets up the conditions of the story, its existence can be as ignorable as the shapes of the pipes in the walls of a home.

The true beauty of form, though, is when it gives shape and context to a story in the way that religion or philosophy give shape and context to life. We can exist without them, but there’s something very comforting about believing that each crashing wave is part of the pattern of our existence. Maybe that’s the real reason I picked up Mr. Palomar, because Calvino always gives me the comfort of believing in a greater design.

If you want to explore the world according to Calvino, pick up a copy of Mr. Palomar from Powell’s Books. Your purchase keeps indie booksellers in business and I receive a commission. 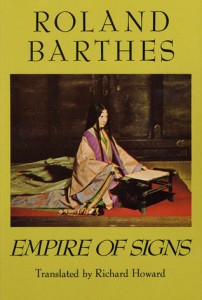 I’ve been writing long enough to notice some patterns in my process. Recently I’ve been in the “read big thinkers because you’re ready to take a big leap” phase. It has something to do with the morass that my second novel has become over the last three years. Enter Empire of Signs by Roland Barthes.

As a literary theorist and semiotician, Barthes writes a lot about signs, and reading his work always gets me excited about the ways we as writers, readers, and humans construct meaning. So although this book contains interesting observations about Japan, it was the meta-level reading that really interested me.

Layers of Meaning Across Languages

One of the first things I noticed when opening this book, is that it had been heavily annotated by its previous owner, Nobuko Yamasaki, a Japanese student at Cornell. What should have been clean white pages with black type were instead highlighted in yellow and underlined in various colors of pencil and pen. And there were notes scribbled in the margins. In Japanese. 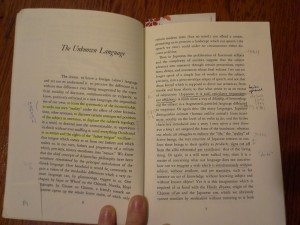 As I added my own notes to the pages, all I could think about was how much Barthes would love this. Here was a book about Japan, written in French, translated to English, and then Nobuko translated some of the more difficult words back into her language. In three separate language we are using characters to assign meaning to words that then assigned meaning to a culture. And Nobuko’s notes were making me reconsider not only Barthes’ observations and the translation, but my own language as well. When she circles “infinite” and writes “So many negative words,” I see a prefix I had never even considered.

When I found reproductions of Barthes’ own translational notations reproduced inside the book, I felt a kinship for him–that Barthes, Nobuko, and I were all on equal footing in this world as we tried to make meaning and expand our understanding of the world. 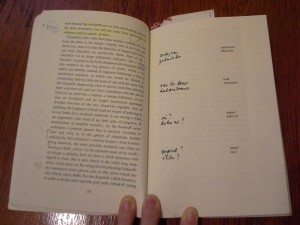 I thought about the connotations of words that would be lost and gained as they were translated across all these cultures and languages, and the richness of that experience made me happy. Of course some meaning would be lost along the way, but an equal amount would be gained. A real linguistic nerd (I’m only a pseudo nerd in this area) could tell you about how the imprints the writer, translator, and readers left as we transformed objects into language are affected by our respective cultures. It’s a conversation I wish I could have with Barthes.

On Japan and Japanese Culture

Living in the Pacific Northwest of the United States, I feel like I am surrounded by Japanese culture and that I understand it. Aside from Narita Airport, I haven’t actually been, but I am surrounded by friends who have (my mom just got back from Japan a few weeks ago) and the imprints of Japanese culture from decades of immigration on Seattle abound. Reading this book, I realized that I wasn’t actually as familiar with Japanese culture as I thought I was. By looking at the country through the eyes of a Frenchman, I realized I was only familiar with other people’s interpretations of the culture. I’ve traveled enough to know that cultural understanding grows with time and direct experience, and I was grateful for that reminder.

Of course, Barthes can only recount the Japanese culture through his own eyes as well, but I found from reading his thoughts on everything from Japanese architecture to the way gifts are packaged and exchanged, I learned more about my own slanted and limited views.

“Haiku reproduces the designating gesture of the child pointing at whatever it is (the haiku shows no partiality for the subject), merely saying: that! with a movement so immediate (so stripped of any mediation: that of knowledge, of nomination, or even of possession) that what is designated is the very inanity of any classification of the object… in accordance with the spirit of Zen” – Roland Barthes, Empire of Signs

Haiku is a form I’ve been increasingly interested in as I write more poetry. By looking at this form from a linguistic perspective, Barthes helped me understand the construction and how to write better. He showed me that I was trying to express deep emotion in a form that might not be suited for it. That doesn’t mean I won’t try, but it does change how I will play with the language.

Because of the inability to strip out our inherent cultural views, I did find myself doubting some of Barthes’ interpretations, but it doesn’t matter, because I can learn from the way he approaches the subject. I simply have to remember that we all have our cultural frames that we bring with us and not blindly accept the teachings of others as I sometimes want to do.

I realize I have told you little of the book itself. That is intentional. Although I think Barthes would have enjoyed the idea of the extra layer of meaning a reviewer adds to the work by interpreting it, I also think I’m too far from the text. Although the meaning would not get watered down (one thing I’ve learned from Barthes is that meaning like energy doesn’t dilute, instead it changes). I can signify the book, but I cannot represent it.

If you want to return to the source material, pick up a copy of Empire of Signs from Powell’s Books. Your purchase keeps indie booksellers in business and I receive a commission.