Imagine a woman, born in the US but who lived for a formative year in Pinochet’s Chile, reading a book by an author born in Chile and living in Canada. The book, originally written in French, is about a Chilean-Canadian man who has returned to his native country to bury his father. Perhaps this international hopscotch begins to describe the magic I felt when opening Eucalyptus by Mauricio Segura. I’m so far inside it, I can’t even tell. Let me share with you what I loved about this beautiful book.

Segura captured me with the first sentence of the first paragraph: “On the horizon, pools of water vaporized as he advanced.” Writers and writing teachers make a lot of (deserved) fuss about first sentences–so much so that it can be paralyzing for a writer to try and come up with something original but not forced, interesting but not obscure. With this sentence I had no idea what country the characters were in, who they were, or what they were doing except advancing. And I was happy to advance with them. It quickly becomes obvious that Alberto is driving and he’s doing so very determinedly.

“He only came to himself when the pickup crossed the old metal bridge over the Bío Bío, where there was a gaggle of children giddy with laughter bobbing along in the river’s treacherous current.” – Mauricio Segura

This is the first mention of geography and it felled me and grounded me. I remembered driving with my own family across that same river one night to see Halley’s Comet. I remembered the children playing in the river. But even if I didn’t have those memories, this simple sentence begins to open for the reader the world that Alberto is re-entering. The children are gleeful despite the danger. Reading further the parents are watching but not very closely. This is not a world where children live on leashes and Alberto will learn some lessons along the way.

My brother, one of the most faithful readers of this blog, will be interested to know that the story takes place in Temuco. It is on the sidewalks of that town that I remember him earning the nickname “Terremoto” which means earthquake. I’ll spare his dignity a little and not commit to the Internet the other story about him in Temuco. Just know, Tosh, that I haven’t forgotten and I’m using my rights as an older sister to tease you about it for life.

“Yes, it is now that the family is breaking up, decomposing like molecules being brought to the boil, and we are scattering to the four corners of the American continent.” – Mauricio Segura

And then there are the images. This is a simple one–much of the language in this book is simple–but it’s deceptive in its plainness. In one sentence we have a family that is rotting, separating, heating up, and dispersing. In a book of only 150 pages, each word has a lot of work to do and Segura (along with translator Donald Winkler) is doing it well.

“‘A few weeks later,’ Carmen said, ‘a policeman came to the farm.’

What’s especially interesting about this relationship between parallel time periods is that there are often no transitions between them. Carmen is telling the story to Alberto after the death of Roberto but the paragraphs of time just slip into each other. It makes the book a little difficult to follow at times but it also causes this gorgeous overlap where all events feel as though they are occurring in the present. It’s a difficult effect (between that and the bouncing bus, I did a fair amount of re-reading) and not one I’d use lightly but Segura pulls it off.

I was attracted to this book first because of the title. The smell of eucalyptus trees can still take me back to long walks up Caracol Hill where I picnicked with my family beneath those fragrant trees. That scent is such a strong part of my memory that when visiting San Francisco I make a beeline for Lafayette Park to be surrounded by it.

What surprised me about this book was finding out that eucalyptus trees are indigenous to Australia, not Chile, and were as much imports to that land as I was. I liked thinking about all the degrees of native heritage that the characters enjoyed from the very native Mapuche people to Marco, a child whose father and grandfather had both bounced back and forth across the continent.

Speaking of the continent, did you catch that moment in the second pull quote on this page where Segura wrote of the “American continent”? When I first learned about the continents as a student in Chile, I memorized the names of all six of them. Imagine my surprise and confusion when I came home to the US where I was then taught that there are seven continents. Amazing how a simple denotation on a map can change your worldview.

I’ve already discussed parts of Alberto and Roberto’s stories, but there is a lot more background packed into this book including allusions to the troubled political history of Chile, evolving relationships with indigenous peoples, and a volcano. On top of that are some deeply complicated family and neighborhood relationships. But somehow the book is not at all crowded. In fact, at times there was so much going on at an almost subliminal level that Segura left me questioning whether I had any talent as a writer at all because he was weaving those storytelling threads so well. The best books leave us something to aspire to.

If you want to explore a little piece of Chile, pick up a copy of Eucalyptus from Powell’s Books. Your purchase keeps indie booksellers in business and I receive a commission. 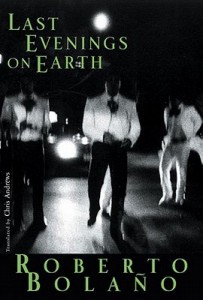