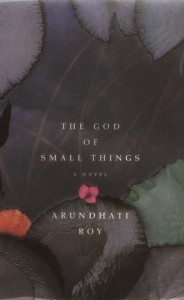 Of The God of Small Things by Arundhati Roy, John Updike wrote, “A novel of real ambition must invent its own language, and this one does.” This quote alone is neither complimentary nor derogatory, but after reading this gorgeous book, I am awestruck at how Roy’s small tweaks to spelling, capitalization, and compound words captured both my attention and the essence of the characters and setting. The language she invents for this book is only the beginning of her ambition and every word on every page is worth the read.

Discovering the True Grammar of a Story

Roy shows from the very beginning of this book that she is doing something different with her language and that to get the most out of the story, the reader will have to trust her. Her wordplay begins subtly as she joins adjectives and nouns into unfamiliar compound words like “dustgreen” and “mossgreen.” It’s a hint of what’s to come, but it’s so gentle that it’s not at all off-putting.

Then Roy begins to emphasize words with unexpected capitalization, as when she writes, “[W]hen life was full of Beginnings and no Ends, and Everything was Forever.” Because much of the story centers around children, these capitalized words bear the weight of a mother’s emphasis—they become words and lessons even when we don’t yet have the context for them. These capital letters also show us how characters see each other. For example, Sophie Mol is often described as “Sophie Mol, hatted bell-bottomed and Loved from the Beginning” in contrast to Rahel whose birth forever marred her mother’s life.

Roy also creates weight around words by intentionally misspelling them. For example, Estha is given “pocket money” at a movie theater to fetch a soda. The Orangedrink Lemondrink Man, who will go on to molest Estha in a few moments, calls this “porketmunny” instead, which denotes both that he comes from a lower caste than Estha and also that he is teasing him. The scene that ensues between them is an important one and this linguistic variation (denoted through the varied spellings) adds a nuance to the moment that could have easily been overwritten if the differences between the two characters had to be described instead.

I’m glad I surrendered my copy editor’s eye to the way Roy was using language. I’m certain this book was a nightmare during the galley correction stage, but the end product is wonderful.

Piecing Together a Fractured Narrative

Kathakali discovered long ago that the secret of the Great Stories is that they have no secrets. The Great Stories are the ones you have heard and want to hear again. The ones you can enter anywhere and inhabit comfortably. They don’t deceive you with thrills and trick endings. They don’t surprise you with the unforeseen. They are as familiar as the house you live in. Or the smell of your lover’s skin. You know how they end, yet you listen as though you don’t. In the way that although you know that one day you will die, you live as though you won’t. In the Great Stories you know who lives, who dies, who finds love, who doesn’t. And yet you want to know again. – Arundhati Roy, The God of Small Things

True to the above quote, Roy reveals early that the young Sophie Mol will die and that her death changes everything for the family. The author shifts easily backward and forward in time as she describes the aftermath of Sophie’s death (spanning decades) and the events leading up to it. Clues are nestled throughout the novel, and yet when we come to the actual death it is both satisfying to finally know and unsatisfying that one event could have such a devastating effect for generations of a family. In this way, the art of the story imitates the justifications we seek in life for terrible events that occur, even though the answers offer no solace.

A book this carefully constructed demands your full attention. I recommend holing up somewhere without distractions so you can fully surrender to Roy’s language and follow the emotional logic of her narrative.

Are there other books you’ve encountered that use subtle wordplay as artfully as The God of Small Things? Please tell me about them in the comments below.

If this review made you want to read the book, pick up a copy of The God of Small Things from Powell’s Books. Your purchase keeps indie booksellers in business and I receive a commission.