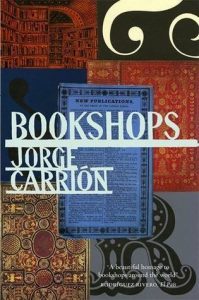 I opened my review copy of Bookshops: A Reader’s History by Jorge Carrión the week I was to finally visit the famed City Lights Books in San Francisco for a friend’s book launch. Like most avid readers, bookshops have long been an important part of my life—from perusing the dusty stacks of Twice Sold Tales with my dad as a child, trying to figure out if I had enough quarters to add another Stephen King to my collection, to discovering that I actually like the new Elliott Bay Books even better than the old as I thumb through the poetry section at its heart. Still, Bookshops had a lot to teach me about my beloved haunts, both those that are familiar and those that are not.

Bookshops is not a reassuring collection of thoughts on why bookstores are important like My Bookstore. Instead it’s filled with micro essays and deep contemplation, glimpses of booksellers both longstanding and soon-to-be forgotten and, yes, loving tributes too. This is a curious book and the way that it’s ordered would drive a researcher mad, but if you surrender to Carrión’s particular labyrinthine logic, it’s magical. For example, you’ll find the history of City Lights Books not in “America (I): Coast to Coast” but instead beside its sister shop, Shakespeare and Company in “Shakespeare and Companies,” a pairing that reminds us geography is only one way of finding kinship. But it’s a fascinating psychogeography and I enjoyed learning about Carrión’s way of thinking as much as I enjoyed learning about the bookshops he describes.

Busting Up My Ethnocentrism

Speaking of geography, one of the highlights of reading Bookshops was Carrión’s Spanish perspective. As much as I feel like I read widely, especially in Latin America and Eastern Europe, he exposed me to so many writers I’d never even heard of. It was a pleasure to step outside the echo chamber of contemporary U.S. writing. While there are North American writers writing in English whom I adore, Carrión reminded me that I’d let my world get too small again and my to-read list is now forever blessed by this book.

Covering bookshops on five continents, Bookshops also reminded me of some of the pleasures of other cultures from haggling to the experience of finding a collection of books in your own language while traveling in a distant land.

I very much enjoyed the way Carrión wove historical tidbits about books and publishing into his narrative with lines like “Books depended on the rag-and-bone man until the 18th century,” a note which forever changed my view of the rag-and-bone man, the books I hold, and our current disposable culture. I had also never stopped to consider that “the first publishing houses comprised groups of copyists” or that the bound nature of a book is something I shouldn’t take for granted.

Carrión also thinks deeply about what it means to be a reader and a writer. His assertion that “literary bookshops shape their discourse by creating a sophisticated taste that prefers difficulty” made me reflect on my own reading and writing habits and desires. While a remark on how “changes of abode and language led to a state of artistic extraterritoriality” fell uncomfortably close to home.

I won’t go into how many of the bookshops Carrión describes closed before he could even put their glory down on paper—it makes me too sad—but maybe that’s part of the importance of experiencing our favorites now and of this loving documentation of the ones that once were. In that way they don’t leave us at all.

“You create books solely to forge links with others, even after your own death.” – Stefan Zweig

Because of my father, the first poet I ever loved was Lawrence Ferlinghetti, which led me to love the idea of the Beat Generation and developed in me a reverence for City Lights Books. But, after a brusque encounter with the man himself at a reading one night, I was reminded of Flaubert’s maxim: “Il ne faut pas toucher aux idoles, la dorure en reste aux mains,” which translates loosely as “don’t touch your idols because the gold might come off on your hands.” So as many times as I’ve walked past this landmark while visiting San Francisco, I’ve never let myself walk in so as to preserve my reverence. But when my grad school advisor and friend was launching her newest book there, I thought it was probably time to get over myself. It seemed too much like one of those confluences of the universe that you probably shouldn’t avoid.

I’m a little shy to say that I rushed into the store and up to the poetry section where the reading would be held, but that particular trip was stretching me in a lot of ways and it’s what I could manage at the time. What I found in that bookstore, though, was better than anything I could have expected. The building that had been built up into some Sacre Coeur-like icon shining brightly from a hill was, once I crossed the threshold, approachable and homely. It felt small and cozy and the reading was mercifully easy to find. The stairs creaked familiarly and I wanted to take pictures of each and every hand-lettered sign encouraging readers to sit and enjoy or the posters for iconic events. But I didn’t. I didn’t have to. City Lights Books became to me one of those places I could sit and absorb. I was at home there. I read an entire book by Kimiko Hahn while waiting for the reading, I met writers old and new. I even met the proprietor of a bookshop whose balcony table became my momentary home—sustaining me during the precarious year after grad school as I scribbled letters to fellow writers trying to keep hold of the community I felt slipping away.

So while for Carrión City Lights was an anchor and a genesis for “new levels of literacy and sophistication in The West after the Second World War,” for me it was a reminder that the bookshop is my home and that when I feel lonely and far from myself, I’d do well to return there. I don’t know if I can make time for weekly letter-writing (and book-buying, let’s be real) field trips to Elliott Bay right now, but I think I’d better try.

To travel the world’s bookshops with Jorge Carrión, pick up a copy of Bookshops: A Reader’s History from the magnificent Powell’s Books. Your purchase keeps indie booksellers in business and I receive a commission.