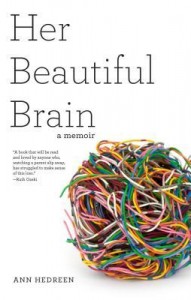 Alzheimer’s is in the news again this week with the death of beloved novelist Terry Pratchett. I say again, but it seems as though Alzheimer’s is never really out of the news. And while my own life has (thankfully) not been touched by this terrible disease, reading Her Beautiful Brain, a memoir of a daughter’s struggle with her mother’s early onset Alzheimer’s by my friend Ann Hedreen, I see how personal and how consuming the disease is both for those who are suffering from it and for each and every one of their family members.

I only know the post-Alzheimer’s Ann. She had already lost her mother when we met. She was already volunteering for research to help others and she was already advocating for awareness and funding to fight this terrible disease. I met the Ann who was writing this very memoir on the first day of grad school as we both sought to get our chops up and find the writer within.

So reading this book at times felt like a revelation—learning about the story of Ann’s family and her life, watching her become the person I came to know—and at times it felt overly intimate—like I was skipping ahead in our friendship to stories she wouldn’t normally reveal for years to come—stories of adultery and spousal abuse. All of these essays together form the picture of one woman’s life as she grapples with the hand dealt to her and her mother.

I’ve resisted writing a review of this book for a long time (so long that I had to re-re-read the book before sitting down to write) because reviewing books by friends is an impossible task. I can’t be objective. I don’t even want to be. That’s not to say it isn’t an honestly good book. It is. I’ve bought extra copies and pressed them into the hands of caregivers I love. It’s also a very personal book, and I struggle to separate the book from the person I know.

In many ways this book is a quest for answers—an exploration of “how could I not have seen what my mother was suffering earlier?” and “is there any way this could have been avoided?” All of that is moot, of course, but it’s so very human.

As Ann recalls a trip to Haiti where she “should have” noticed her mother’s failing brain, we see signs noticed in retrospect, but in Arlene (Ann’s mom) we also get to know a schoolteacher who not only raised the kinds of kids who venture off to Haiti in the Peace Corps and as filmmakers, but also visits them there despite recent lapses in memory she’s started to find troubling.

When Ann delves into her mother’s early childhood in the blighted mining town of Butte, Montana, we see the environmental devastation that may (or may not) have contributed to the Alzheimer’s, but we also get to understand a life much different from our own—one that bred hardy people.

We don’t know what causes Alzheimer’s or how to stop it, that’s part of the frustration. And Ann does a wonderful job in this book of showing how maddening and important that search for answers is.

(Aside here, my dad says all I write about is pregnancy these days, to which I respond, duh… 🙂 )

One of the things I related most closely to in this book is Ann’s story not just of being a daughter but of becoming a mother in this time where she was watching her mother decline and eventually waste away. It’s a particular space in life where you get to see aging, birth, and the essence of who you yourself are becoming, and I was grateful for the window into that time (especially at this time for me).

In many ways I think this book is more about those relationships between mothers and daughters than it is about the disease (which makes the book all the more universal).

The Art of Memoir

I’m not a memoirist and any attempts I’ve ever made in that direction have been failures, so I often wonder what makes a good memoir. In Her Beautiful Brain I learned about telling a bigger story than what you think you’re telling. I learned about staring hard at the particular to ground a reader in the moment. And I learned about building analogies between the “small” stories of your life and the “large” stories that make the memoir universal.

If someone you love has been affected by Alzheimer’s or you just want to know more, pick up a copy of Her Beautiful Brain from Powell’s Books. Your purchase keeps indie booksellers in business and I receive a commission.