What a week it’s been. Seven days ago at this time, my husband was with our dog, Rocky, at the vet for what would be his second to last visit and I was trying to decide how to tell our four-year-old son that the dog wasn’t coming home. The dog did come home, and we spent a tense 48 hours watching for the inevitable before we could get the second, final visit. And somehow, on Monday I did find the words to tell my son that Rocky was not coming home. He covered his ears and did not want to talk about it. As heartbreaking as this conversation was (as well as subsequent ones where I tried to make sure he knew he could talk to me when he was ready), it’s nothing compared to trying to explain racism to a small child, even as I’m still learning about it myself. 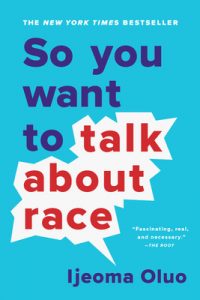 But the time for change is now. That’s why I finally took Ijeoma Oluo’s So You Want to Talk About Race off the shelf in my bedroom where it had been waiting too long to be read.

When my son was born, a friend insisted I read Between the World and Me by Ta-Nehisi Coates. An excellent book, and a hard read in that early parenting time when my empathy for all humans was almost shattering, I learned a lot from Coates. But my reading of that book did not fix our society and really, it did not fix me either. And I won’t say that I’m fixed now that I’ve read (most of, I’ll finish the rest this afternoon) Oluo’s book, either, but So You Want to Talk About Race engaged me in a conversation I needed to have with myself and Oluo gave me both the language and the understanding necessary to try harder.

A Lexicon of Racism

Too much of my experience of the world these days comes from Twitter-sized synopses in which I either smile or rankle before moving on and forgetting. And while I’ve had a superficial understanding of the concepts of white privilege, intersectionality, and microagressions, I haven’t really put the work in to know what I could do about any of it besides feel guilty and try to not say ignorant things. Oluo helped me take that next step by unpacking what the words mean and what they look like in everyday life. She opens up ideas of how white people can start to confront and dismantle them in their own lives and in the lives of the people around them. She also speaks directly to people of color.

Two of the most impactful things Oluo helped me understand are the power dynamics of racism and the ways I’ve been failing to properly empathize with the experiences of people of color. They are not unrelated, but while I cannot dismantle the white supremacy inherent in our institutions (today anyway), I can breathe in her “basic rules” of determining if something is about race until they are a part of my body:

Do any of those rankle? As a student of sociology, I had no trouble accepting the last two, but I really struggled with the first. Which meant I had to ask why. Where I’m at now (a few days into this process) is that I’ve been so gaslit about my own experiences (as a woman) that victim blaming is part of my body. My mechanism for feeling better about myself is trying to control every aspect of every situation so that I can never get hurt so if someone else gets hurt then clearly they failed to control something. Except that argument is as full of bullshit for people who are subjected to the abuses of a racist system as it is for women who are raped, assaulted, or harassed.

And the passing of a counterfeit $20 bill is never, ever a crime that should be paid for with a life.

The Beauty of Vulnerability

“Acknowledging us, believing us, means challenging everything you believe about race in this country. And I know that this is a very big ask, I know that this is a painful and scary process. I know that it’s hard to believe that the people you look to for safety and security are the same people who are causing us so much harm. But I’m not lying and I’m not delusional. I am scared and I am hurting and we are dying. And I really, really need you to believe me.” – Ijeoma Oluo So You Want to Talk About Race

I haven’t read White Fragility (yet), but I do know that when confronted with my own racism I more want to hide in a corner than confront my bad actions and I’m certain I’m not alone. In So You Want to Talk About Race, Oluo does the reader the kindness of opening up her own vulnerability. She both unpacks moments when she was not representing the values she espouses and experiences when she has been victimized by institutions and individuals. I’m deeply grateful for this approach, because by being so open and vulnerable with her readers, she made it much easier to be open and vulnerable back. Although she often says (correctly) that it is not the victim of racism’s job to educate the perpetrator, this choice is helping me examine both the problems with the system and also the ways in which I have perpetuated those problems.

The Structures of Power

As I mentioned, institutionalized racism was one of the hardest parts of this book to get my head around, I think because I was raised to believe in this American ideal of founding fathers who were looking out for all of us and who set up this great nation around some very laudable ideals. And now I have to interrogate all of that. We all do.

The police in my brain are here to “protect and to serve” and that’s a comfortable place to return to when I want to ignore one more abuse or death at their hands. But I remember the way the teenagers in my home town were hounded by the police—and we were white. When you entrust someone with a job, you have to be very careful how you frame that job. Even if you think about little things like quotas for traffic tickets. That’s not the police looking to stop people who are breaking laws, that’s a worker trying to check off a list of tasks and they’ll enforce traffic laws at whatever level they can until that list is complete. Now add a government and a legal system that was designed to protect the property of white men. I don’t know enough about what makes the police act as a military force against people of color (though I’m thinking about it); I do think they are acting to protect a status quo that should not be protected.

I don’t need to watch the video of George Floyd’s death to know that kneeling on the neck of a human being (ever, not to mention until they die) is not ever okay. But when John T. Williams was shot down in cold blood by a Seattle police officer, I used personal knowledge of his behavior to make excuses for the officer. When the pregnant Charleena Lyles was shot and killed three miles from where I lived with my almost two-year-old, I was sickened yet did nothing. In truth, those cases formed a pattern where the police failed to place the value of a human life above the value of their own inconvenience.

It’s beyond time that we confront what is wrong with policing in this city and this country, that we dismantle the current system, and that we instead build something that serves everyone. Something that treats human lives (of all colors) with value. I believe strongly that this starts early in life when we must give all children the same opportunities. I also believe that we have to stop treating 12-year-olds like Tamir Rice like it’s too late for them because their bodies are big. That no one should die for selling cigarettes, as Eric Garner did, or for being in a house where drugs were suspected of being sold, as was the case with Breonna Taylor. Black lives are human lives and black lives matter.

What I’m Telling My Son

The day my (then two-year-old) son asked for a Playmobil tactical van, my heart sank. But he thought it was a police car and he wanted it and I wanted him to have what he wanted. Now he asks me to turn off NPR when they use the word “dead.” Mostly I do, because there are a lot of details he does not need to know. But this week is different. As will be all the weeks going forward.

This week we talked about why people become police officers, that some people want to help others and that’s good, but that some people want power over others, and that’s bad. We talked about skin color and things that make people look different but that’s only how they look on the outside. We talked about how he needs to stand up for his friends because sometimes they won’t be able to stand up for themselves. Later, I’ll probably have him sit through the Sesame Street town hall on racism. Because while we try to surround him with diverse books and friends of all colors with a wide variety of life experiences, it’s not enough.

So I’m going to keep reading, Oluo’s book and others, and turning that knowledge into action. There are a myriad of good anti-racism reading lists out there and I also recommend this podcast and essay. As always, I’m open to your suggestions. Let’s take our hands off our ears and change the world with the power we have. We’re stronger than we know.