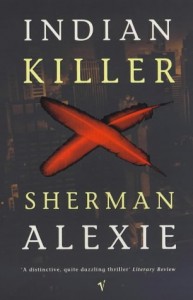 I have spent the last several days riveted by Sherman Alexie’s Indian Killer and it has challenged me every step of the way.

I grew up in Idaho—arguably the whitest state in the nation. Yes, you know it for its white supremacists (who I’m told have moved to Montana, but I really wouldn’t know). My small town once made The New York Times when an Arab student was found “lynched” in the woods (the death was later ruled a suicide). I had an African American friend and a few Asian friends (the university did bring some diversity to town), but the culture was pretty homogenous and my experience with race was limited.

I’ve lived in Seattle for a decade and a half, but despite the greater diversity of communities here, I never got over my inability to talk about race. I try sometimes, but I mostly fumble awkwardly and throw in some words I learned in Sociology. I am not an unworldly person, I have lived abroad and I think managed not to be the ugly American. But when it comes to race at home, I’m still flummoxed, despite good intentions. And here I am still beating around the bush.

A friend has introduced me to the idea of microaggressions, defined by Chester Pierce as “brief and commonplace daily verbal, behavioral, or environmental indignities, whether intentional or unintentional, that communicate hostile, derogatory, or negative racial slights and insults toward people of other races.” Alexie does a fantastic job of presenting these when the narrator muses about how a Native American student’s teacher interacts with him, “If John happened to be a little fragile, well, that was perfectly understandable, considering his people’s history. All that alcoholism and poverty, the lack of God in their lives.” Those two sentences, early in this book, rocked my world. I saw how “well meaning” can be hurtful when we are looking through our stereotypes instead of at people directly.

Indian Killers introduced me to a wide array of Native American experiences. Set in Seattle, the characters are homeless, housed, drunk, and sober. They are mixed race and not and they represent a number of tribes and degrees of identification with race. The Native American characters in the book are in themselves diverse and their experiences with Caucasians are equally diverse. All the characters are round (read universally flawed) and I learned from their strengths and foibles. I learned from their friction points and their biases.

I loved this book. I’m still a failure when it comes to talking naturally about race, but I am learning to open up and at least try to have the conversation and to look at people for who they are without the shortcut of skin color or nationality. Plus Indian Killers is a great mystery and flat out well-written.

If this review made you want to read the book, pick up a copy of Indian Killer from Powell’s Books. Your purchase keeps indie booksellers in business and I receive a commission.