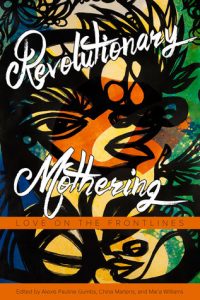 I picked up Revolutionary Mothering: Love on the Front Lines after reading an excerpt of Alexis Pauline Gumbs’ Undrowned (which made my stage 4 pandemic reading list) in the Boston Review (one of those “I love this so much I’ll love everything you ever do” book purchases). I started reading the book before visiting my mom for the first time in two years because I wanted to reconsider what mothering meant and maybe start to heal some of the rifts between us. What I didn’t anticipate is how much the book would start to heal my soul in general and open me up to better ways of thinking.

“Children are the ways that the world begins again and again. If you fasten upon that concept of their promise, you will have trouble finding anything more awesome, and anything more extraordinarily exhilarating, than the opportunity or/and the obligation to nurture a child into his or her own freedom.” – June Jordan, Revolutionary Mothering

We, as June Jordan puts it, “possess a degree of power over the lives of children that we would find inconceivable and unspeakably tyrannical in any other context.” I’m sure this is something every child feels at some point as they grow, it’s the basis of individuation, after all. As the mother of an almost-six-year-old, it’s something I wrestle with every day. There is so much beauty and determination in my small son. I am so grateful to be his mother and also I need him to eat some protein with his lunch (whichever of the four options he’s given). I’m sure my parents wrestled similarly with the little girl who wanted to wear her grandmothers gold glitter pumps to preschool.

Reading Jordan’s essay gave me a lot of fodder for thought about how I parent and how I was parented—about the conscious (and unconscious) choices we make every day and about the consequences of those choices.

“Children are not individual private property, but they are also not objects through which we seek to achieve our political goals or address our emotional needs. To do so would violate children’s human rights.” – Loretta J. Ross, Revolutionary Mothering

“Women are socialized (not created) to care for others and to expect others to care for them. Mothering, radically defined, is the glad gifting of one’s talents, ideas, intellect, and creativity to the universe without recompense.” – Loretta J. Ross, Revolutionary Mothering

Depending on your race and socioeconomic status, you may be targeted with messages of mother as saint or mother as devil (or even both). There’s a lot packed up in the word, “mother” and in our expectations of the people who undertake this work. What there is not enough of, however, is support for parents from our communities, our government, and sometimes even our own families. The essays in this book reminded me that care work is essential work and that anything we do that fails to celebrate and support the raising of the next generation is a failure to invest in mothers and in children.

“How can a household, a community, or a nation be effectively governed when women are held disproportionately responsible for its future yet are disproportionately neglected, abused, excluded, isolated, and invisible? Two words: it can’t.” – Malkia A. Cyril, Revolutionary Mothering

As much as I love my son, mothering is the hardest thing I have ever done. I do it every waking moment of every day and most of the time I am glad for it, despite general exhaustion and overwhelm. And I write this as a financially secure white person with a deeply involved partner. A lot of ugly has been surfaced during my time as a mother (and I don’t just mean my own inadequacies). I birthed a child into a country that would soon elect a tyrannical, racist, misogynist president, and then #MeToo and George Floyd opened conversations we should have resolved generations ago.

I don’t know where I’m going with this except to say that if you don’t know where to start with making the world a better place for the next generation (or even your own), find a parent: offer them your attention and help, ask them how they’d change the world if they had any free time at all. Then read Cynthia Dewi Oka’s “Mothering as Revolutionary Praxis” and let it change your life and the lives of those around you.

“We recognize that attacks on this mama work are grounded in anti-feminist, classist, racist, and sexist ideologies.” – tk karakashian tunchez, Revolutionary Mothering

The introduction by Loretta J. Ross taught me about the Reproductive Justice Framework, the idea that “in addition to fighting for birth control and abortion, equal attention must be paid to the human right to become a mother, and the concomitant and enabling right to parent our children in safe and healthy environments.” There is so much wrapped up in this. First of all, the idea that choice runs both ways and that we should openly embrace all those choices. We spend so much time fighting each other (often impotently on social media) about choices people are making for their own bodies, what if we channeled that energy into fighting for each other’s human rights? What if we celebrated people who chose to have children and people who chose not to? What if we looked at each life that was consciously brought into this world as a gift? What if we invested in our communities and environment to the extent that everyone felt safe and healthy? Some of these ideas might seem radical, but they are not impossible.

“By discrediting the motherhood of women of color, poor white women, queer mothers, immigrant mothers, etc., this turns maternal virtue on its head, as these ‘bad’ mothers are held responsible for all the ills of society from the Wall Street mortgage crisis to environmental degradation caused by climate change. Because our children (however mothered) are the product of ‘morally impoverished’ mothers, our children become disposable cannon fodder for U.S. imperialism around the world or neo-slaves in the prison industrial complex.” – Loretta J. Ross, Revolutionary Mothering

As a child of the 80’s, the phrase “welfare queen” is as familiar to me as “trickle-down economics” and I’m embarrassed to say that I didn’t really question the idea that people would have more children to get more government money until I had a child of my own and realized how difficult mothering is. I wasn’t running around assigning that name, but I wasn’t actively working against it, either. Reading Revolutionary Mothering I realized how much I’d bought into a racist, classist ideology that was built on heaping blame on our most vulnerable while the wealthy were celebrated for reaping whatever they wanted. Every essay in this book is a bold reminder of how much of the work toward making a better tomorrow is being done by people who get shit on daily by individuals and institutions. We have to do better.

The capitalist underpinnings of the last section lead naturally to Autumn Brown’s essay, “Scarcity and Abundance,” which sparked the most cogent conversation I was able to have with my husband about this book as we drove to visit my parents this past weekend. In Political Science classes in college, I was drawn to the idea of zero sum versus positive sum thinking. I identified as positive sum, but as I’ve grown older and more tired, I’ve felt pulled back into zero sum (at least at the worst of times). It’s been an ever-present topic during the pandemic on a global and personal level, and Brown contextualized this dichotomy for me in relation to mothering. I realized some of the struggles I have with my mother is that she, too, is drawn to zero sum thinking (or a scarcity model) when she’s at her worst because of how her mother treated her. She has her abundance moments, too, and I think she’s also wrestling with this dichotomy (though we haven’t talked about it).

The important takeaway for me here is that when I’m feeling grumpy or like there isn’t enough, I have to wake myself up to the fact that I don’t believe in a world where there isn’t enough—I, like Brown, believe that “if we develop relationships based on sharing our struggles AND our resources, we do in fact have enough of everything.”

“I experience abundance because I expect abundance, and because humans are social creatures, we live up to cultural expectations, whether they come from outside of us, or from within.” – Autumn Brown, Revolutionary Mothering

Learning to Mother Myself

As the editors write, “We are accountable when we are specific.” For me, my greatest fault is the selfishness that comes from nurturing hurts long past. I realized in reading “m/other ourselves” by Gumbs that not only am I wasting energy in a cycle that will never change itself, I actually have the power to heal myself. As she writes, “love is possible in a world that teaches us to hate ourselves and the selves we see waiting in each other.” This small contextual shift loosed a feeling in me that I have more to offer the world, from beginning to forgive my mother to embracing the amount of love I have in my body for humanity as a whole. Gumbs writes of all kinds of groups where people come together to use the power of mothering to help each other and by God, I want to be part of that.

“To revolt, we must measure the depth not of our victimization but of our capacity and resilience.” – Cynthia Dewi Oka, Revolutionary Mothering

As Cynthia Dewi Oka writes, “The ethos of mothering involves valuing in and of itself a commitment to the survival and thriving of other bodies.” This is something I felt deeply after the birth of my son—the feeling that I was connected to every human on the planet and that each individual life had value. Lisa Factora-Borchers describes this beautifully throughout her essay, “Birthing a New Feminism.” My specific revolution, for now, is that I will learn to meet my own needs so I can share all the love that I feel with the other residents of this planet.

“The creative spirit is nothing less than love made manifest.” – June Jordan, Revolutionary Mothering

Next up, I’m waiting for a collection of June Jordan’s work to arrive from my local independent bookstore. The Twitterati were celebrating her birthday as I read this book and I realized that not only did I love her essay in this book but that many of the people in Revolutionary Mothering were inspired by her ideas. I can’t wait to read more of her work for myself and see what sparks. Meanwhile, whether you are a mother or simply were born of one, I highly recommend reading Revolutionary Mothering to see what it opens up for you.