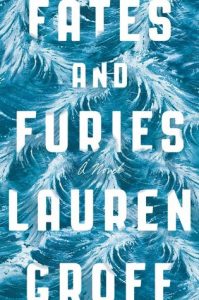 Sick this weekend and more than a little desperate to read something that would not further irritate my fevered brain, I pulled Fates and Furies by Lauren Groff from my to-read shelf. Though I cursed Groff when I could not put down the book to fall into a much-needed nap, something I should have expected because her earlier novel Arcadia had kept me up at night, I was also grateful because it’s been too long since a full-length novel incited me to read with such hunger. I even skimmed the last sixty pages as my husband read to my son in the other room—hoping with each new section break that they’d go through one more round of exploring darkest Peru so I could live inside this book until the very end. Fates and Furies also got my brain moving on some topics I care deeply about: marriage, the myth of the lone genius, and Greek mythology.

I had a creative writing teacher who told me once that there were no novels about happy marriages. I begged to differ but looked around and struggled to find any. His point was about how conflict makes a story, mine was that conflict is not the only thing that makes life interesting. Fates and Furies may be the final answer to our conversation—we were both right, in a way.

When we first meet Lotto and Mathilde, newly married and freshly fucking on a beach, everything is right in their pair. Throughout the first half of the book as we explore the life of this charmed boy and his quiet wife it seems as though the tempest is outside their relationship. He, an adored first son, loses his father early and his overbearing mother has trouble letting go until he does something teenagerish and she sends him away to try and charm another part of the country. Lotto suffers, yes, but he always seems followed by some glance from the gods that shields him from the very worst. Mathilde is part of that shield.

I won’t say what causes the shift in the second half of the book, but I will say that I haven’t been as rocked by a change in point of view since reading Jonathan Dee’s Palladio. To put it gently, we suddenly begin to see Mathilde’s side of the story and I’m so embarrassed to say (and yet it is so telling) that I hadn’t realized how absent she is as a character from the first half. Help meet, yes, wife too, but never a person in her own right. I don’t know which is more shocking, that she is a full, rich, fascinating character or that she was able to stay behind the scenes so long.

But we do love ourselves a lone genius, don’t we? Especially if that genius is male. Norman Rockwell toiling away in the barn making culture-shaping images while his wife tends to the kids. Hemingway working his way through all kinds of wives never failed to stop halfway through a sentence each night and get up to finish that sentence the next morning. And then there’s Salinger lingering in the woods with a nymphet acolyte. Of course they aren’t alone but their work exists on the backs of people whose contributions will never be acknowledged. It’s a trope I’ve studied carefully as I tried to model my own success, one it took me far to long to realize is bullshit. Yes, someone has to clean the toilets and pay the bills and wipe the butts, but failing to be a part of those activities is failing to understand (and participate in) essential parts of life.

Which makes me mad at Mathilde. Because as much as Lotto was a beloved, coddled boy, she continued to infantilize him through adulthood. Don’t get me wrong, Lotto should have grown up on his very own accord, but that’s on him. Mathilde wasted her life cleaning up after Lotto and I think she did it out of penance. The backstory to how Mathilde became the person she is is deeply saddening, but she could have been so much more. Maybe I’m just worried because I have my own beloved, coddled boy and I want very much for him to grow up to be a strong individual and if he finds a strong partner who’s also a strong individual, so much the better.

The Magic of Greek Myths

Something else I want for my boy is to have a strong understanding of Greek myths. I was raised on them and I have tomes to share with my son when I think he’s ready. To me, they are as important as the Bible to understanding the underlayment of our culture.

But my idea of an ideal education may have been shaped by some 19th century novel or other and making in-jokes about Sisyphus to my coworkers is often a futile effort—no matter the caliber of the private schools they’ve attended. So I loved how rife Fates and Furies is with allusions to these wonderful stories, from the obvious (a play based on Antigone) to the less so (a mother sitting forever at home as though that home were Mount Olympus). I’m going to blame my illness for the fact that it took me so long to understand the knowing asides were like the classic Greek chorus or the gods looking down from on high (or both), but I loved the effect before I got it and even more so after.

And when I realized on the last page which mythological character Mathilde was, it changed everything for me. And I wept.

To immerse yourself in Fates and Furies, pick up a copy from Powell’s Books. Your purchase keeps indie booksellers in business and I receive a commission.