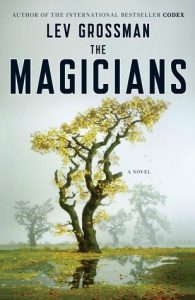 Was it magic or serendipity that a copy of The Magicians by Lev Grossman showed up in my local Little Free Library the very same week that the related Syfy series showed up on Netflix? I’m not certain, but I can say that reading the book while binge watching the series has me a little convinced that there is magic in the world around me, even if my Popper finger movements haven’t yet led to the dishwasher loading itself. It’s rare that I like an adaptation as much as the book, but experiencing the two together has added a whole new layer of enjoyment to the story and characters for me.

The World We Know

The story of The Magicians revolves around a school (Brakebills) that trains magicians and a series of children’s books about a magical place in the back of a cupboard called Fillory. While it would be easy to dismiss The Magicians immediately as derivative of Harry Potter and The Lion, the Witch, and the Wardrobe, given time Lev Grossman builds his own rich story around these elements. And though even more derivative elements crop up in the one season of the series that I’ve watched, I was always interested enough in Grossman’s characters to shrug it off.

Sequences Out of Time

The TV series and the book (books, really, The Magicians is the first book of a trilogy) are a wonderful case study of how to adapt literature to screen. Apparently this adaptation was done with the help of the author, something I credit with the success of the show, but I’ve seen authorial involvement go as badly as The Magicians goes well. There are notable differences: in the books, Brakebills is a college, on TV it’s a grad school; some of the characters have different names; some of the characters from the books don’t exist in the series; one of the characters from the series barely exists in the book; the timeline in the book is much elongated; etc.

What’s gorgeous about experiencing these two together, though, is the times that they do intersect. I think that’s because are fully realized in their own rights. Yes, there were moments of the series that made a lot more sense when I realized that the characters were originally fresh out of high school, but overall I liked that the series has a little more tooth because of the adult characters and that the books are more innocent. What I liked even more, though, was that I felt like I was having my own Fillory experience where life (TV) would go on every night as we watched episode after episode and a few days later I’d encounter spots in the books (Fillory) where the action overlapped with the series.

One thing that’s remarkable about the generation after mine is how much more fluid their idea of gender is—both in their norms and in who they love—and I appreciate how this was reflected in The Magicians. It’s more obvious in the series, but the source material certainly exists in the book. It’s something I enjoyed about Sense8 as well, until the writers threw away a perfectly good story in favor of scene after scene of pan-sexual orgies. I’m not opposed to depictions of the latter, but please don’t take away my story. The Magicians does a much better job of incorporating the human sexuality of a gender-fluid generation into the context of the story.

Let’s be honest, time is short now that I’m a mom and I’m choosier than ever about what I read. But I still watch a couple hours of TV a night because I can sit next to my husband and share an experience without applying too much mental effort.

Whereas I ran through the show as fast as possible given the above schedule, if I hadn’t had a couple of holidays and a sick day, I might not have finished the book at all. I really appreciated the compressed timeline of the series when compared to the somewhat lagging action of the book (especially after Quentin leaves Brakebills). I appreciate that it’s difficult to portray creative malaise and a post-grad slump in print, but it’s much harder to read a slow portrayal of said malaise.

I’m excited to see the next season of the show, too, because there were aspects of Fillory that I think will translate better to screen. In the books there are all these mishmashed chimeras that were underdeveloped and felt pretty throwaway. Plus, one of my favorite characters (no hints!) disappeared for far too long in the book.

As I said, I’m glad that Lev Grossman was involved in the adaptation. I think he might be a better screenwriter than a novelist and I don’t think I’ll read the next in the series.

To make up your own mind about The Magicians, pick up a copy from Powell’s Books. Your purchase keeps indie booksellers in business and I receive a commission.