Depression robs me of feeling and enjoyment. It can also be a strong wake-up call to get back in touch with the things I value quick quick. Listening to the Kavanaugh hearings and all the blather afterwards I felt all the emotions—from the hope that a woman’s voice would be heard against the establishment to the devastation of having my worst expectations confirmed. I tried in those first few days to engage with my family and to touch the thing that always brings me back to myself—books—instead I found myself changed. I don’t know yet if for the better or the worse, or even if this change is permanent, but it’s big enough to explore, here, with you.

Silencing the Cacophony of Mansplaining

The first thing I noticed about how my reading was changing was that I suddenly wanted to throw A Feast in the Garden by George (Gyorgy) Konrád against the wall. I’ve had this reaction before when reading Roberto Bolaño—I loathed his narrator’s didacticism and the way it put me directly in touch with the (male) narrator’s thoughts about the story while distancing me completely from the (female) protagonist’s actual experience. Yes, this could have been done for effect, blah blah blah, but as a woman in this society I’ve had my fill of men explicating something I could or have experienced. I actually loathe the phrase “mansplaining,” but even more so I loathe the male voices that seem to find their only personal fulfillment in explaining—especially when they’re explaining my own experience (or something I know more about than they do) to me. This is not all men, but it’s too many. And I think it’s part of my on-again, off-again beef with Hemingway. Something I did not realize until this week.

So for one moment I feared I was off male narrators forever. Thankfully, Konrád is a brilliant artist and I came to see the effect of what he was doing in this book (which I am still reading, slowly, as his writing demands and deserves). I do, however, feel a lot more comfortable chucking narrators who don’t earn their keep right out my damned window…

Do I sound angry? I am. And embracing my actual feelings instead of trying to make them palatable was something that led me to this next book…

Getting Intimate with Women’s Darkness with Toddler-Hunting & Other Stories 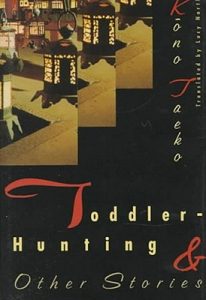 I felt a little dumb when Toddler-Hunting & Other Stories arrived and I realized it was not by Yōko Ogawa (whose dark short stories in Revenge I adored) but instead by Kōno Taeko, a completely different female Japanese author who is also not afraid of taking readers to dark places. But Toddler-Hunting & Other Stories was fantastic, so much so that I wish I could give proper credit to whomever recommended it to me.

What made this the exactly right book for me exactly right now is that listening to Dr. Ford’s honest, gentle, people pleasing ways in that hearing I honestly believed someone might hear her. But that too-common female approach to power got bowled the fuck over and I needed to experience a completely different approach to female power. Do Kōno’s protagonists feel even a little bit guilty about how damned bad they are as they do things like stalk other women’s children? Maybe. They don’t feel at all bad about asking for whatever they want in bed, though, and I loved them for that (even though I wish at least one was the dominant rather than the submissive in the recurring BDSM scenes in this book). I loved being inside the experience of women who felt real to me in their myriadness.

By far my favorite story in this collection is “Snow,” a tale whose psychological underpinnings are so on point I gasped and felt physical pain when I figured out what was going on. It delved deep and unashamedly into the ugly that can be relationships between women—something I fear will prevent the kind of voting backlash I hope for in November. Toddler-Hunting & Other Stories is fantastic. Read it. 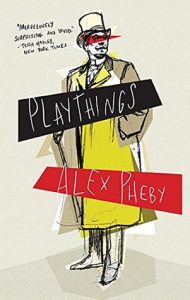 I’m not going to presume that Alex Pheby’s Playthings is a tightly scripted allegory of our present day (partially because it was originally published in 2015 and also because it’s actually about one of the most famous cases of paranoid schizophrenia in history), but let’s pretend for a moment it is. At first I was not sure that I could delve deeply into Schreber’s all-consuming self-centeredness (for example, he so completely can’t deal with the fact that his wife has a stroke that the action in that scene then has to completely center around him), but I went with it long enough to get immersed in this superb example of what it feels like to be gaslit by everyone around you. Pheby does a wonderful job of draining the life (at least from Schreber’s point of view) from all the characters around the protagonist and of portraying this man’s madness. I guess that’s the secret sauce of gaslighting, isn’t it? We all have some secret weakness that can be turned against us and drive us to madness. The fact that Schreber is in fact mad makes it just that much easier.

The old-timey feel of this book belies its modern effectiveness. I loved the way Pheby played with chapter introductions—using the length of 18th century-like chapter titles and the feeling of interludes—to transition us through this strange story. The historical setting also contributes to this effect. I was glad we never quite get Schreber’s diagnosis because experiencing the symptoms (and getting to wonder how much the people around him were exacerbating them) was much more powerful than having a concrete, rote, dead name applied to that experience (maybe because I don’t like things being explained to me). Telling myself that this book was an allegory made getting through the day a lot easier and I was enthralled enough by the middle of Playthings that I stopped taking notes. That’s a good sign. Check it out if you want a fictional look at what it feels like to feel completely insane.

I have not recovered from the depression or the related dashing of my hopeful illusions (over and over and over), but I’m no longer letting the current political crazytown keep me from my favorite coping mechanism, either. What are you reading to put light in these dark days?

If you need a good literary escape, pick up a copy of A Feast in the Garden, Toddler-Hunting & Other Stories, Revenge, or Playthings from Powell’s Books. Your purchase keeps indie booksellers in business and I receive a commission.