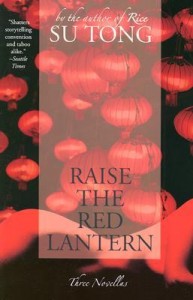 Su Tong creates a world of magic and mystery in the title novella of Raise the Red Lantern. Though we are never certain if the magic is real or imagined by Lotus, it feels authentic. Su blends the real with the ethereal so gently that even the harshest skeptic can enjoy the mystical elements of the story.

Our first view of Lotus is as she is being carried into the garden of her new home. She seems plain, with her “face covered with dust and looking unbearably exhausted.” We are told that Lotus is very practical, still washing her hair in the sink where her father had committed suicide. This plainness and unflappability lead us to see her as having a cool head and so when she starts to unravel, we naturally think there is great cause. If Lotus had been hysterical from the onset, we wouldn’t trust her ability to separate reason from emotion.

The first inkling of anything remotely spiritual is Joy chanting sutras over her Buddhist rosary, but her sincerity is dismissed by Chen. Then, during the first night Lotus spends with Chen, we get the swirling of her consciousness: “Lotus seemed to fall from a high place into a dark valley where pain and dizziness were accompanied by a feeling of lightness.” Whether this is an effect brought on by the house or by Lotus’s mental state, it feels eerie and gently portends a death in a well.

The concealment of the “Well of Death” in overgrown weeds lends it an air of magic, and the butterflies and the song of the cicadas make it more so. Su increases the mystical quality of the place by linking it in Lotus’s mind with a prior experience under wisteria which “seemed like suddenly waking from a dream.” When “[s]lowly she pulled back a few branches of wisteria,” it is as though she pulls back a curtain separating the real world from a magical one. Lotus hears “the sound of her breathing being sucked down into the well and amplified” and then “[a] gust of wind rushed up,” and the well seems to have taken on life. Lotus is unnerved by the falling of flowers as she leaves it and I was also set on edge.

“Crystalline specks of brightness” on Coral’s face and her hair being covered with dew after a hard frost would otherwise seem unlikely, but Su has established that the rules of the Well of Death are unlike the rules elsewhere in the Chen family compound and by the time Coral is singing The Hanged Woman under the wisteria in a black cloak, I am prepared for anything to happen there. Descriptions like rain “splashing off the aspen and pomegranate leaves with a sound like shattering jade” should also seem improbable, but they are so lovely and we are so wound up in the text that they contribute to the mysterious ambience.

Chen provides a foil for Lotus’s suspicions about the garden. She tells him: “[t]his garden is a little spooky” and he resists her flatly: “A couple of people died in that well, that’s all; jumped in and committed suicide.” But his dismissive response only heightens the reader’s belief in the mystery. Now there is a reason that the well feels haunted and when Chen becomes serious after Lotus guesses the suicides were concubines, she has convinced him a little of the spookiness and convinced me a lot. He may think she’s imagining things, but he also doesn’t want her near the well. This is the part in the story where we realize that it doesn’t matter whether he believes in the magic or whether he mistrusts Lotus’s mental stability, and it doesn’t matter which the reader believes. Both explanations point to the same disastrous consequences for Lotus.

Lotus starts to go mad and causes Swallow’s death, and then witnesses the murder of Coral, but by then she has lost her credibility in the Chen household. If the story were told in the first person, it would be crucial for the reader to decide whether Lotus is credible or not, but the narrator is credible and the narrator leaves us with the feeling that although Lotus has gone mad, there is something bad about that place.

I have a soft spot for magical realism. I like to read about intersections between the logical world and the spiritual world and I have tried to write about them, but I find I often doubt my own worlds. Su Tong taught me from this story to set the scene well. The reader (especially an American reader) will likely have doubts about the authenticity of the magic. Any fictional world needs to set up its ground rules. Su set up his by providing me with a lot of everyday activity but then seducing me with magical images. Su used the natural resistances of the characters to mirror and then overcome the doubts of the reader. As Lotus comes to believe in the magic of the place, I wasn’t yet convinced, but when Su showed me how Lotus overcame Chen’s doubts, he also overcame some of mine. But even then he left me an out. The story worked just as well if I believed Lotus was mad.

If this review made you want to read the book, pick up a copy of Raise the Red Lantern from Powell’s Books. Your purchase keeps indie booksellers in business and I receive a commission.