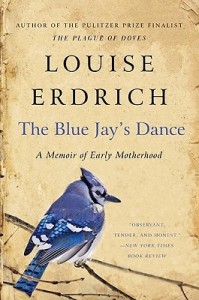 Pregnancy is a weird time. My body is changing radically but only incrementally. I can’t bear to be out of sight of my husband. The world is full of advice and stories of their own experiences (which I need but is mostly misplaced). I’m full of worries that seem ridiculous but mean everything—if I can’t feel the baby moving is it okay? will I ever write again? And I’m too tired, mostly, to read properly and too tired to do anything but read.

So when someone recommended The Blue Jay’s Dance: A Memoir of Early Motherhood by Louise Erdrich, it sounded like the answer to all my needs, and as I read this book, I realized its open, meditative nature makes it a book that can be enjoyed by parents and non-parents, writers and non-writers, and anyone who loves nature.

“To make love with the desire for a child is to move the act out of its singularity, to make the need of the moment an eternal wish. But of all passing notions, that of a human being for a child is perhaps the purest in the abstract, and the most complicated in reality.” – Louise Erdrich

I wanted this baby so much. My husband and I have been talking about starting a family for a couple of years now and in many ways the last nineteen years have been us getting ready to be parents. But neither of us had any idea that we’d get pregnant so easily. So I felt less prepared embarking on this adventure than I wanted to, even acknowledging that there wasn’t going to be much I could do to prepare. Hell, I’m still convinced that conception, rather than science, is magic.

I very much enjoyed that many of the essays in the book are actually an amalgam of Erdrich’s three pregnancies. She never names which daughter a section is about, but acknowledges how different her children are. This gives the book a stunning openness because it’s non didactically about what a pregnancy or parenting should be, it’s about that moment with that child. But because the child is never named, the essays can be about any child, and unlike so much of the advice offered by others (which carries an air of justifying that person’s own choices) these stories and fragments can be taken in part or in whole—however the reader wants.

“The self will not be forced under, nor will the baby’s needs gracefully retreat…. To keep the door to the other self—the writing self—open, I scratch messages on the envelopes of letters I can’t answer, in the margins of books I’m too tired to review.” – Louise Erdrich

Fear is the biggest harbinger of the unknown, and for me that fear has centered around blend of losing myself and of being inadequate. I know (pregnancy has already shown me) that my relationship with the things I love—my writing and reading—will necessarily change, but if I let them go (or if they are wrenched from me or change into unrecognizable beings), I don’t know who that makes me. At the same time I will be responsible for the care and well being of another human in a way that seems so all consuming…

So reading about the way Erdrich balances the parent self and the writing self—and the ways she copes with what will not balance—was extremely helpful to me. This book showed me it’s possible, at times, to write with a baby in one arm when neither urge will retreat. It showed me too how much the act of raising a child can feed the writing self, even when writing is not possible. Perhaps the hardest part of this—my biggest fear—has been about losing myself to the pregnancy, to the child, to parenting, but Erdrich has shown me that I will make this my own and that who I am actually shapes my own experience. It’s reassuring.

“Most of the instructions given to pregnant women is as chirpy and condescending as the usual run of maternity clothes…. We are too often treated like babies having babies when we should be in training, like acolytes, novices to high priestesshood, like serious applicants for the space program.” – Louise Erdrich

I believe in the well meaning nature of others. I believe I have the power (and sometimes responsibility) to witness their stories in order to help them feel whole. I know how healing and validating that can be. But right now, I want to—can only really—focus on me. Because this thing that is happening to me and my body and my husband and my home and our family—it is the biggest thing that will ever happen to us (at least until death) and while some people have the gift for sharing their experience without trying to smother mine, most don’t. Which is challenging for me, because I believe in the well meaning nature of others…

“Part of a writer’s task is to put her failings at the service of her pen.” – Louise Erdrich

My biggest fear throughout this pregnancy and really in life is that I will at some point fail to be a writer (and thus lose myself). Because writing is the one way in which I express my true nature. The page is the place where the complexities, ambiguities, and conflicts of my thoughts can coexist and complement and make sense. Writing helps me think. It calms me. It’s made me who I am.

I stepped down from the board of Hugo House to prepare for having a family. My reading slowed down when I got pregnant because all I could do was sleep. I even felt like I stopped writing except for these silly scraps of what I thought were drippily sentimental pregnancy poetry. Now I’m finding that pregnancy has given me a new vocation, one I tried at in high school and then abandoned—pregnancy is turning me into a poet. And while I don’t yet have the skills to polish those scribblings, I cherish this new project and the idea that while my writing might be changing, I am still a writer.

Sleep (Where I’ve Been)

“Sleep is the only truly palatable food at first. I sleep hungrily, angry, needy for sleep, jealous for sleep, devouring it and yet resentful of the time it takes away from conscious life.” – Louise Erdrich

I’ve had a couple of inquiries in the past couple of days about where I’ve been and if I’m okay—inquiries that meant the world to me. I am okay, if you call okay spending most of my available hours either napping, sleeping, or planning when next I’ll get to do one of the two. Turns out that growing another human is EXHAUSTING. But I’m a champion sleeper from way back, so I’m trying to relish the excuse. Even when it takes me away from things I love.

That’s to say that these reviews will continue to be erratic. And they may continue to focus on pregnancy for awhile. See, I tried to write a review that wasn’t about pregnancy (because I know other people have other things on their minds) but it’s where I’m at. It’s the biggest thing going for me right now. And I can’t really think about anything else.

We heard our baby’s heartbeat for the first time on Friday. A rapid little 130bpm. And afterwards I couldn’t think of any other thing.

I’ll be back here when I can because you matter to me and writing these reviews matter to me. I’ll even continue to strive to write the non-pregnancy review. But if you need something to keep you occupied and inspired in the meantime, go read The Blue Jay’s Dance, it’s worth a read and a reread and another reread. You might even discover how much of the book speaks to the non-pregnant 🙂