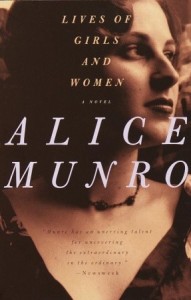 In Lives of Girls and Women, Alice Munro exposes the reader to the inner world of her first-person narrator, Della Jordan. The psychic distance throughout the book is always close, as I would expect in a first person narrative. However, Munro makes use of a full range of narrative distance from distant:  “[t]he snowbanks along the main street got to be so high that an archway was cut in one of them” to close: “the thought of him stayed in my mind like a circus net spread underneath whatever I had to think about at the moment.” When Munro presents scenes of Della’s burgeoning sexuality, she uses the combination of the close psychic distance and a close narrative distance to explore the fullness of Della’s contradictory feelings.

As Della begins to fantasize about Mr. Chamberlain, we are treated to thoughts like: “Mr. Chamberlain’s voice in my mind…acted on me like the touch of rayon silk on my skin, surrounded me, made me feel endangered and desired.” The reader falls in with Della and is treated to her most intimate thoughts as she first begins to see herself as a sexual creature. I felt her naïveté as she mulls over the implications of the conversation she has just heard:  “[t]hey mature earlier in those hot climates…A man paid you to let him do it. What did he say?  Did he take your clothes off or did he expect you to do that yourself?” The questions she is asking herself reveal the shallowness of her experience, but her observations about Mr. Chamberlain imply how willing she is to explore this new, forbidden realm farther.

“His face contained for me all possibilities of fierceness and sweetness, pride and submissiveness, violence, self-containment. I never saw more in it than I had when I saw it first, because I saw everything then. The whole thing in him that I was going to love, and never catch or explain.” -Alice Munro, The Lives of Girls and Women

Della begins to fantasize about being seduced by Mr. Chamberlain, but “[t]he moment of being seen naked could not be solidified, it was a stab of light….in the corner of my daydream he was featureless but powerful, humming away electrically like a blue fluorescent light.” Because I am deep inside Della’s thoughts, I am privy to the innocence of her inability to fully imagine the scene and also to the lustiness and force of her emotions. Although Della’s hormones are coursing through her like mad, she has no concrete experience on which to base her fantasies. If Munro did not place the reader so deep in Della’s mind, it would be difficult to convey the same complexity of Della’s childlike lasciviousness. She could be a Lolita through Humbert’s eyes or a victim, but not as fully both.

I was involved with Della as she read through Fern’s papers and finds the bawdy poetry. I understand Della’s relationship with the word “fuck, which I had never been able to look at….I had never been able to contemplate before its thrust of brutality, hypnotic swagger.” Della is taking a word that she has seen and for the first time is really starting to understand. Mr. Chamberlain has already groped her and she has willingly gotten in the car with him and the word sits out there as a possibility rather than a profanity. Della is on the cusp of asserting her sexuality.

I enjoyed being so intimate with Della. I think more so because this came so late in the book. She was already a friend and I understood her to a certain extent. I felt like I was willing to grow with her through her contradictory emotions. At some points I felt like Munro was pulling thoughts out of my own adolescent head and I think that is due to the tortured duality of the thoughts. As people, especially as adolescents, we experience uncertainty. When Mr. Chamberlain finally exposes himself to Della, her observation that his penis is “[n]ot at all like marble David’s” says everything. The parts of the fantasy she couldn’t quite imagine are right there in front of her and she could (would) never have imagined them in that way.

My narrator in Polska, 1994, Magda, is of a similar age and sexual experience level as Della. As I think back on this book, I realize how much I learned from the realism of the contradictions in Della’s thoughts. And the stark contrast between the fantasy of sexuality and the reality made the reality of Mr. Chamberlain even more grotesque than a grown man molesting a teenager would stereotypically be. At the same time, the naturalness with which Della faces her sexual desires portends the healthy sexual relationship she will have with Garnet. She is not victimized by Mr. Chamberlain, he is simply one step on her path toward sexual awakening.

If this review made you want to read the book, pick up a copy of Lives of Girls and Women from Powell’s Books. Your purchase keeps indie booksellers in business and I receive a commission.