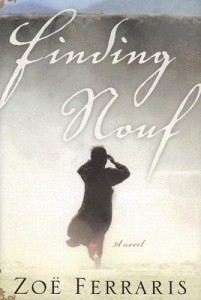 If it wasn’t for the semi-annual book swap I attend, I never would have read Finding Nouf by Zoë Ferraris. But someone in that group of fabulously well-traveled and intelligent ladies had read this book and wanted to share it. She’d wrapped it up like a gift and put it in with the other books for selection that night, and my luck was to pick this book from the pile and to keep it despite several rounds of white elephant style takebacksies. Finding Nouf sat on my to-read shelf for only a month or so and even then I picked it up a couple of times every week to see if I was ready to read it. Soon I was and I’m so glad I did.

Finding Nouf is the story of Nouf, a young girl from a wealthy family in Saudi Arabia who has run away from her family compound in Jeddah in the days leading up to her wedding. It is also the story of Nayir, a Palestinian man who is so in tune with the desert that everyone assumes he’s Bedouin. He is hired to find Nouf. And it is the story of Katya, a Saudi woman who is engaged to Nouf’s cousin and who also, surprisingly, works with the coroner.

It might sound like this is just a detective novel, and there is a certain amount (though not too much) of a CSI fix in the book. But what makes the book great is the myriad perspectives into a country I would otherwise never know.

Nouf, who is quickly found dead, is firmly entrenched in the female coterie of her household, but that comes with its fair share of silent rebellions. Nayir is an outsider but he is so devoutly Muslim that in many ways he fits better with Nouf’s family, at least the male side, than Nouf does. And Katya is both respectful of the traditions around her and also, because of circumstance and personal preference, reaching to reinvent traditions to suit her life. Together, these voices form a picture in the round of life in Saudi Arabia. The characters are round and human and interesting and even side characters from other classes and cultures help flesh those perspectives more fully.

Because the lifestyle in Saudi Arabia is so very foreign to me, I was very sensitive to getting an unbiased view, which is, of course, impossible from just one source. So while I absolutely loved the cultural details Ferraris wove in (details so fine they could only have been written by someone who had been there) and the fact that the plot was just the right amount of plotted, I was always sensitive to the fact that the book is written by an American. An American who lived in Saudi with her then husband for a time, but an American nonetheless. (And yes, as an American author whose first novel is about Poland, I understand the irony of even making this argument).

Where this becomes really important is that when Nouf or Katya pushed against the limitations put on them because of their gender by driving, going to work, or even flipping up a burqa, I kept wondering why the whole group of women doesn’t overthrow those conventions. So what was missing for me was a deeper insight into the women who want to live their lives that way and whether they are a part of reenforcing the norms westerners consider limiting.

I fully acknowledge that there might be a feeling of powerlessness that would make women who want to rebel unable to do so, but I believe there is also a contingent of women who want to live the way they do. It’s a balance that was better struck in A Teaspoon of Earth and Sea, likely because that author came from within Iran. I really cannot say either way, but the time I spent wondering about the power dynamics in Saudi Arabia did distract me from the book.

I was also grateful for that distraction because it made me look more closely at the world around me. I live near a mosque in Seattle and I’d say that the number of women I see on the bus who either cover their hair or wear a full abaya has increased dramatically in the last decade. I’d often considered that those women were forced by tradition or family to dress that way. But reading this book and wondering so much about Saudi culture (and Muslim culture overall) I realized I was being an idiot and that some women choose to cover themselves in the way that I choose not to wear anything shorter than mid thigh. I knew that, kind of, from the debate about French laws against the hijab, but Finding Nouf opened me up to better understand my own world, too.

My Own Circle of Women

I’m off to book swap again tonight for more book inspiration and to get advice on my trip to India. I have no idea what book I’ll come home with, but I’m certain the books and the company will stretch my thinking and open me up to books and ways of thinking I hadn’t yet considered. It’s an evening full of literature and female wisdom and I can’t wait.

If you want to use literature to catch a glimpse of life inside Saudi Arabia, pick up a copy of Finding Nouf from Powell’s Books. Your purchase keeps indie booksellers in business and I receive a commission.